Continuing with the chassis restoration, the next step was to affix the fish plates to the chassis rails. Replicating the original construction would involve hot riveting the two steel surfaces together.

Prior to blasting the chassis, we had discovered the stencil painted production number which had been hidden for 80 years behind the fish plate. 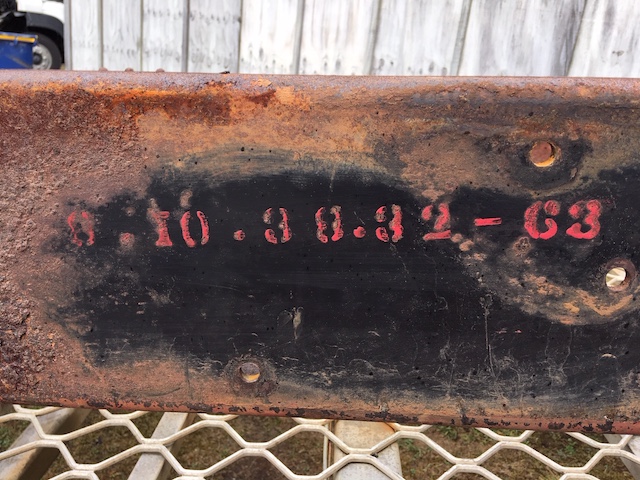 By blasting the chassis, this part of the tanker’s history was being erased. So, for the sake of posterity, we decided to reinstate the number in the exact position in which it was found. 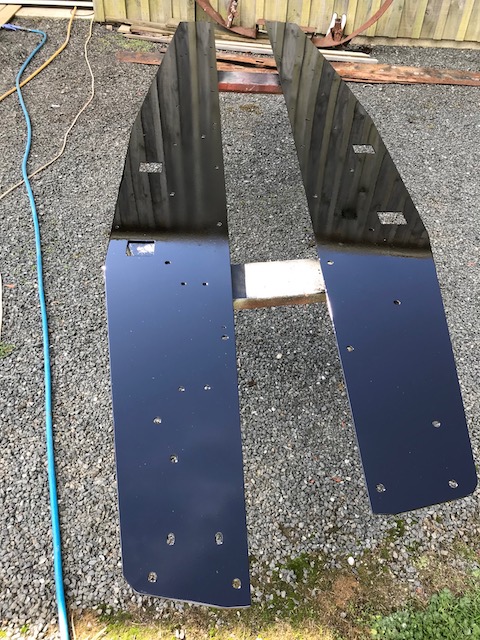 For future rust and corrosion protection, Steve painted the inner sides of the fish plates, and the corresponding areas of the chassis rails as these surfaces were about to be permanently joined together. 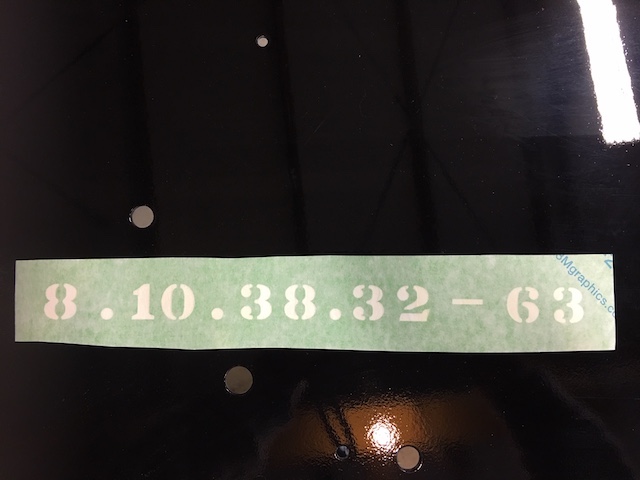 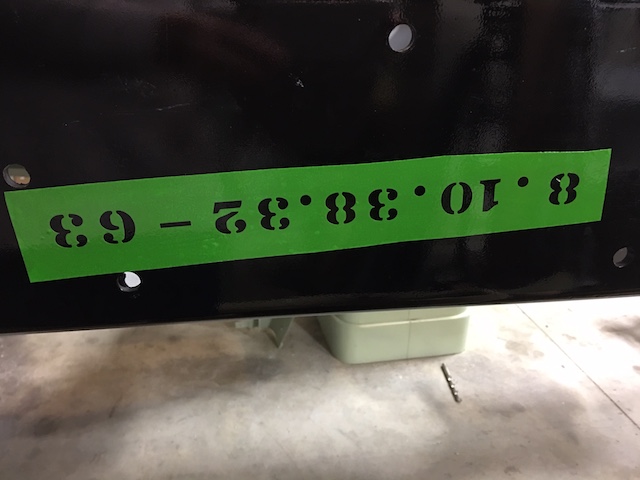 As the chassis was turned over the other way this time on the mobile jig, we had to identify the position with everything upside down.

Steve and I agreed that we needed to position the stencil crooked to replicate the original placement of the reference number. 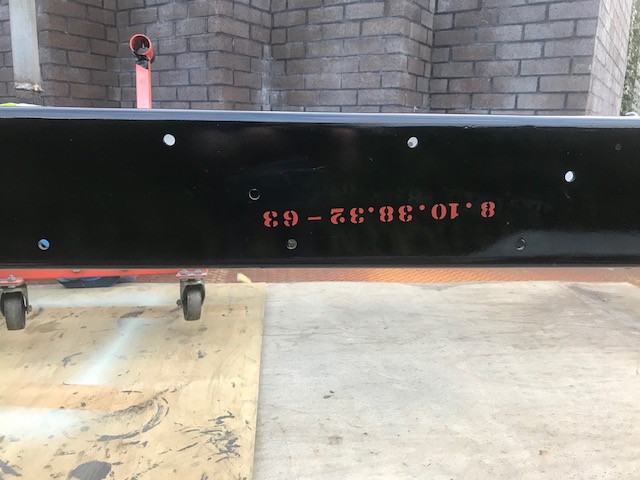 Steve then sprayed the reference number back on to the rail in readiness for the fixing of the fish plates. 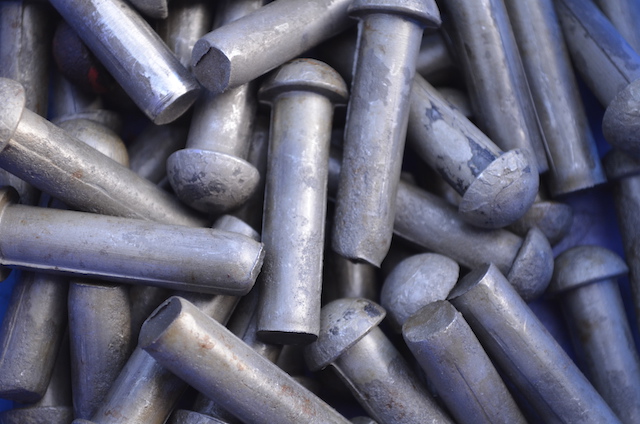 A rivet is a smooth cylindrical shaft with a ‘factory’ head formed on one end. The opposite end of the shaft is known as the ‘tail’.

The basic process of hot riveting involves heating a rivet until it is glowing hot, inserting it into a pre-drilled hole and then hammering the tail of the rivet. The correct terminology is the tail being ‘upset’ or ‘bucked’. This action closes the joint and fills the entire assembly hole. The excess is upset into a rivet set which produces a dome shape on the tail known as the ‘shop head’.  As the metal cools, it contracts and tightens, and in doing so seals the assembly.

The rivet is a permanent mechanical fastener, and was used extensively throughout the second half of the 19th century and the first half of the 20th century. Many famous steel structures were built using the hot riveting technique, and a lot of these are still in use today.

The Eiffel Tower, the Empire State Building, the structure of the Statue of Liberty, the Titanic, the Normandie, the Queen Mary, the Tower Bridge and the Golden Gate Bridge are just a few of the monuments, buildings, bridges and ships that were constructed using these small metal shafts.

The numbers of rivets used on some of these structures are staggering. A total of 2,500,000 rivets were handmade and used in the Eiffel Tower. Beating that number was the Titanic which had approximately 3 million iron and steel rivets used in its construction.

It makes the 40 odd rivets that we needed seem trivial, but a process still had to be planned and trialled before the fish plates could be riveted back on.

Tom Andrews had already done some hot riveting on another project of his so he offered to help rivet the fish plates to the chassis. As we sat chatting about the process, Tom recalled his dad, John, sharing memories with him of the hot riveting that John had witnessed when he first starting working.

Back in the 1930s, at the age of 12, John began working in the ship yards in Hartlepool, Yorkshire, as a boilermaker / welder.

John remembered that a furnace was set up in a central location and one worker was responsible for heating up the rivets. Around this furnace was teams of men placed at intervals along the ship’s hull.

The rivet-heater or ‘cook’ would remove the rivet from the furnace using tongs, and then throw or fling it in the direction of each team. The rivet-set holder would catch the rivet, insert it in a hole using tongs and hold it in place. Another worker known as the ‘holder up’ would use a dolly or bucking bar to firmly brace against the factory head. On the other side, the riveter (or two riveters) would hammer the tail end to close the joint, and create the shop head.

This sequence happened continuously at a constant and fast pace. With the teams usually requiring four workers to install one rivet, the process was definitely laborious.

It was great listening to Tom to visualise, and gain a better understanding of, the conditions, process and hard work that went into the hot rivet construction of that era.

Affixing The Fish Plates To The Chassis

The first step in planning the riveting technique was to make a die for the shop head. This would create the same dome shape that a rivet set would produce. Alan Sharp kindly machined up two dies in his lathe and had them hardened. 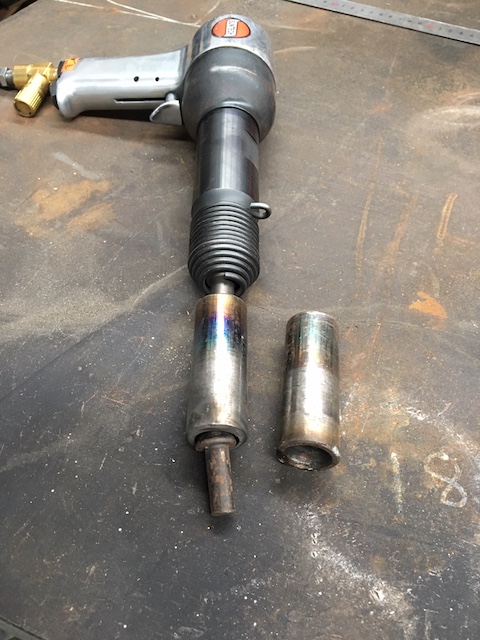 The decision to harden the dies proved to be the right one as there was no distortion, wear or damage when the rivets were being installed. 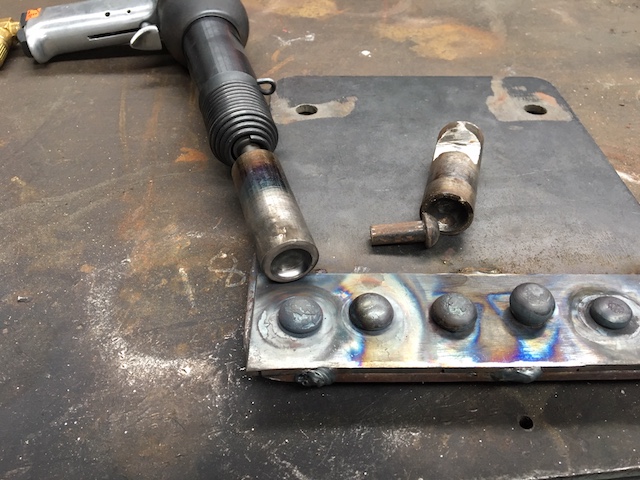 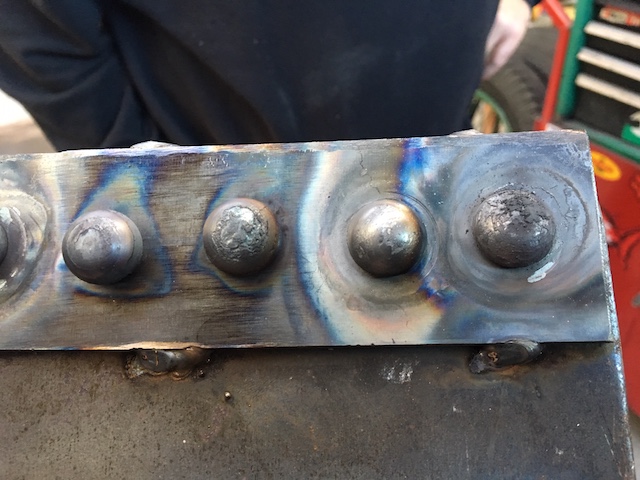 Using an air chisel, the next step was to trial the hot riveting on a test sheet. The varying shapes as the technique was perfected are shown above. 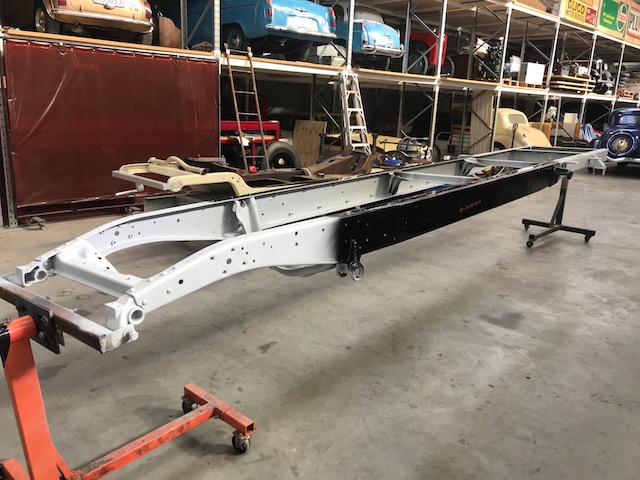 Steve took the chassis down to Hamilton where Tom and Greg were going to carry out the hot riveting.

Thanks to Tom, we have several very short video clips of them heating and installing the hot rivets.

Link
To obtain the same heat as a furnace, a flame was applied directly to the rivet using a gas torch.
Link
Using the die in an air chisel created a perfect domed shape for the shop head at the tail end of the rivet.
Link
Another view of the tail being upset / bucked.
Link
At times, more heat would have to be applied to get the rivet hot enough. This is not always the ideal method as the flames can really affect the paint! 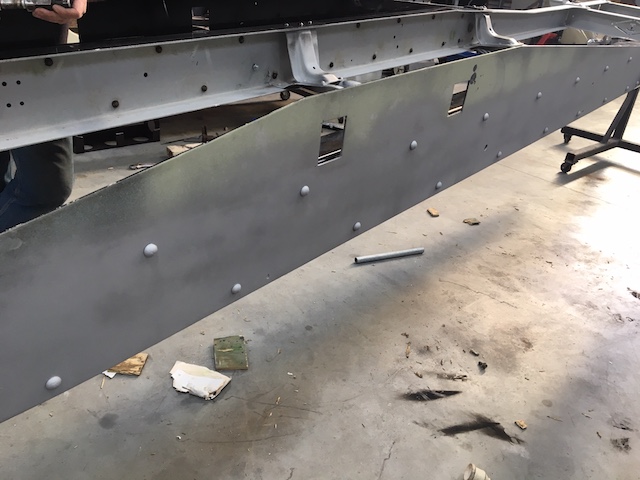 The end result was a replication of the original construction back in 1938. We are so grateful to Tom and Greg for getting the riveting done to such a high standard, and for the photos and video clips that they managed to take during the riveting. Our thanks also to Alan Sharp for machining up the dies. As always, we very much appreciate Tom’s help and commitment to get this tanker finished.