The stylish dash instruments from the Diamond T Texaco tanker have been fully repaired and restored, and have undergone a dramatic transformation. In addition, I have looked back at the history of the manufacturer of these stunning gauges, Stewart-Warner Corporation, being another chapter in the Texaco tanker’s story.

The first challenge that we faced when restoring the dash instruments was the deterioration of the graphics. Because the ink had degraded so badly, some of the gauges had no index markers or dial artwork left whatsoever.

So our only reference material was access to another unrestored Diamond T truck with the same style instruments, and a couple of images online. The only variation I found when comparing the other Diamond T truck instruments to the Texaco tanker, was the wording on the fuel gauge. 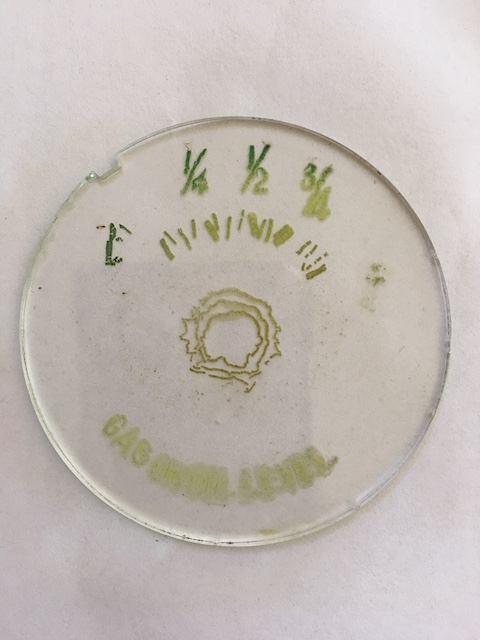 Instead of the one word ‘Gasoline’, the Texaco tanker fuel gauge reads ‘Gasoline Level’. 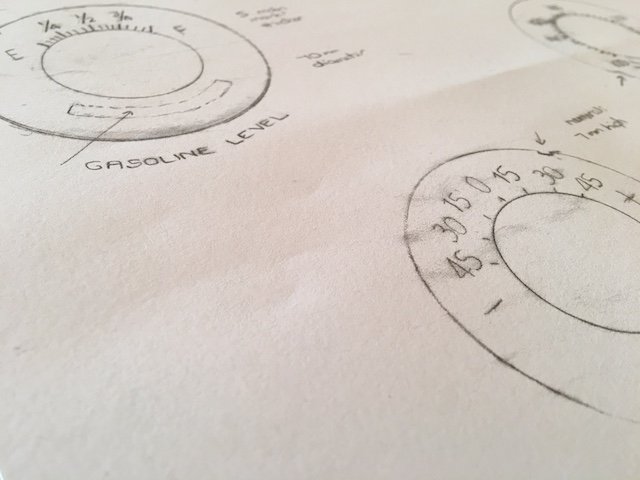 To help Mitch recreate the graphics, I began by hand sketching the precise height and width of the words and numerals, and the positioning of the index markers. Mitch was then able to confirm these measurements as he scaled the graphics and recreated the original font style.

He then produced the dial artwork for each respective inner glass insert. 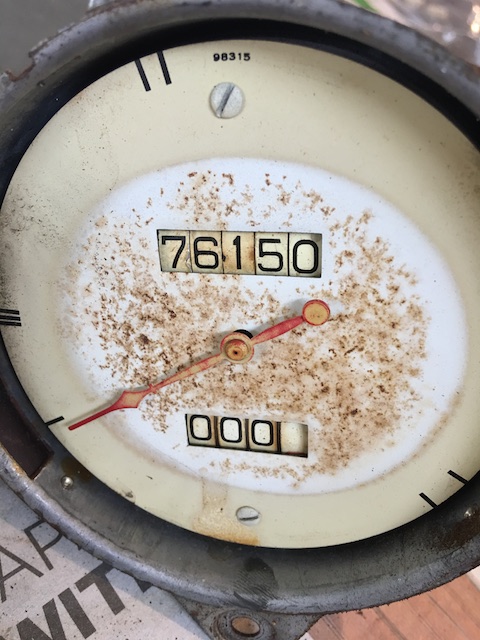 Once the instruments were dismantled, we were finally able to see the original face colour that had been hidden under the brass inner bezels. 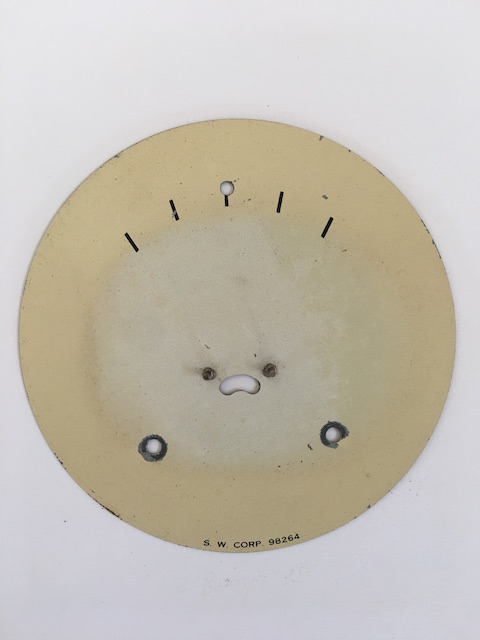 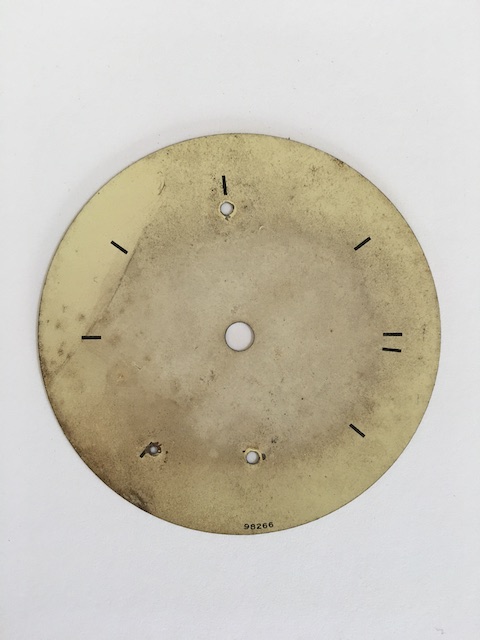 Marked on the outer edge were the Stewart-Warner part numbers of the face dials. 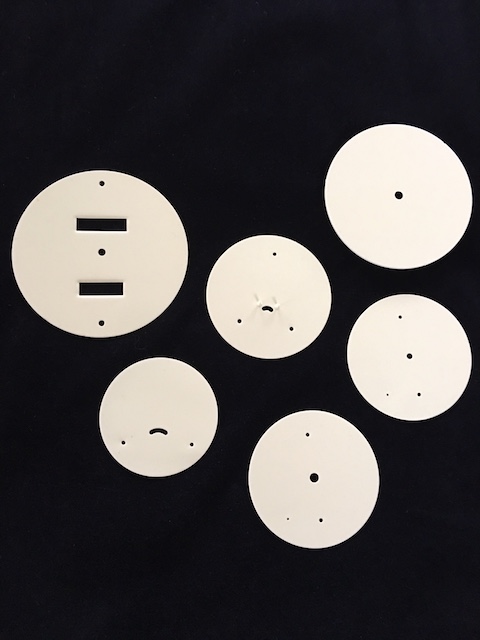 Steve matched the original colour before stripping the paint off all the gauge faces. After cleaning and preparing the surfaces, Steve painted the complete set of instrument faces. 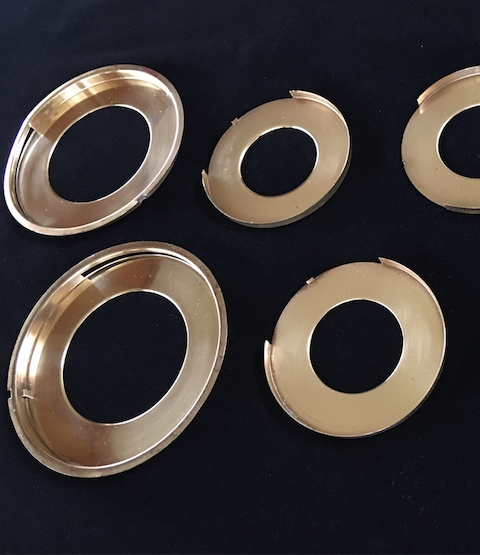 He then polished all the inner brass bezels and clear coated them to prevent tarnishing, and stripped and painted the gauge pointers.

The next step was to find the best craftsmen to strip and inspect each instrument.

The repairs to the George W Borg clock were entrusted to, and arranged, by Alan at Watch World Ltd. Alan, a lifelong friend, has worked as a watchmaker for his entire career and is a ‘car guy’. He has followed and supported this project since day one and appreciates the rarity and historical significance of the ’38 Texaco tanker. It goes without saying that we were very grateful for Alan’s help with the clock.

The movement was stripped down and ultrasonically cleaned to remove the old oils and contamination that had accumulated over the 80 years. Once cleaned, the movement was checked for wear on the bearing surfaces, and any worn bushings were replaced and adjustments made. The movement was then reassembled and lubricated as necessary.

Alan commented to us that for its age and the miles it had travelled, the clock was in a remarkably good condition compared to the rest of the truck.

As a final check, the clock was attached to a 12 volt battery and bench tested for several weeks to ensure that everything was working correctly.

We then asked friends, Richard and Keiron Adlington, to locate an instrument repairer who we knew had moved to Kinloch, near Taupo. Bruce Chaytor of Instrument Repairs, had restored a set of gauges for Bryan Belcher’s Diamond T some years earlier. Bruce specialises and focuses on vintage and classic dash instruments, so he was our first choice for the repairs to the Stewart-Warner gauges.

Due to the clock and dash instruments being disassembled for the painting, polishing and dial artwork, we were hesitant to post or courier the fragile pieces to Bruce. So Richard and Keiron kindly collected and delivered the gauges and parts on several occasions on their trips between Auckland and Kinloch.

On receipt of the instruments, Bruce stripped, cleaned and inspected the gauges. He zeroed the mileage, and made and fitted new decals to the odometer and tripmeter.

A new capillary was fitted to the temperature gauge, and repairs were made to the fuel gauge coil. The tank unit was cleaned and then tested with the fuel gauge.

Bruce arranged for the external bezels to be chromed, and the gauge cases were zinc plated. 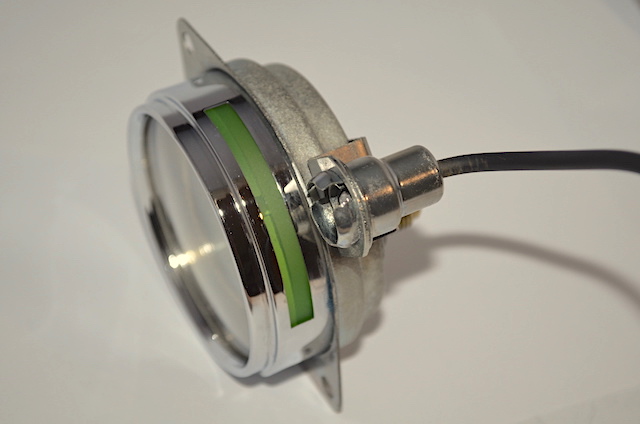 New green strips were fitted in the side slots of each gauge. It is through these slots that the gauge faces are illuminated, either by a bulb attached to the gauge case or from a borrowed light source under the dash.

Bruce then reassembled all the gauges, tested each one and calibrated the speedometer to the manufacturer’s specifications.

To top off the great service, Bruce and Nicolette hand delivered the set of restored instruments back to us when they made their next trip back up to Auckland.

The beauty and style of these Stewart-Warner instruments is enhanced by the sheet of glass that sits inside the inner brass bezel. Having the dial artwork on the glass creates the illusion that the three green rings are floating in the centre of the gauge face. 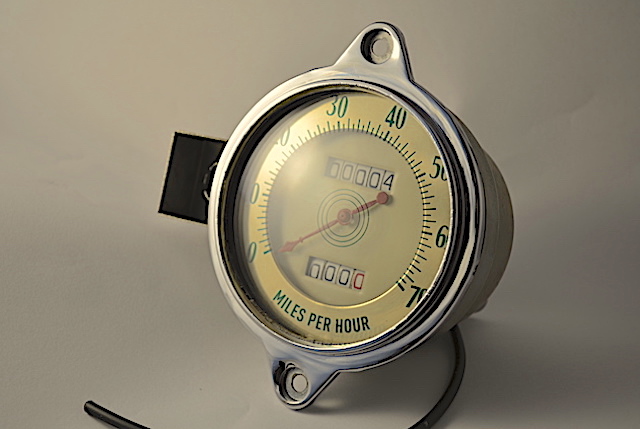 The deluxe features of the Diamond T cab, and these Stewart-Warner gauges in particular, make it easy at times to lose sight of the fact that the Texaco tanker was a working truck.

Before and after shots …… 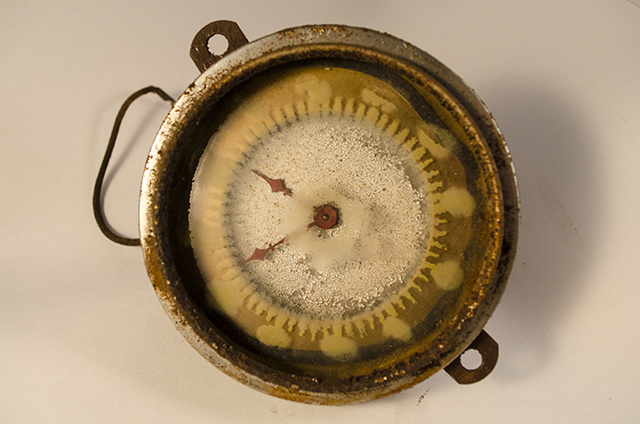 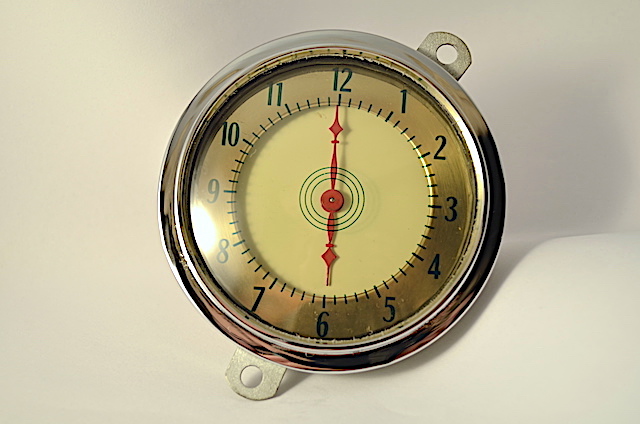 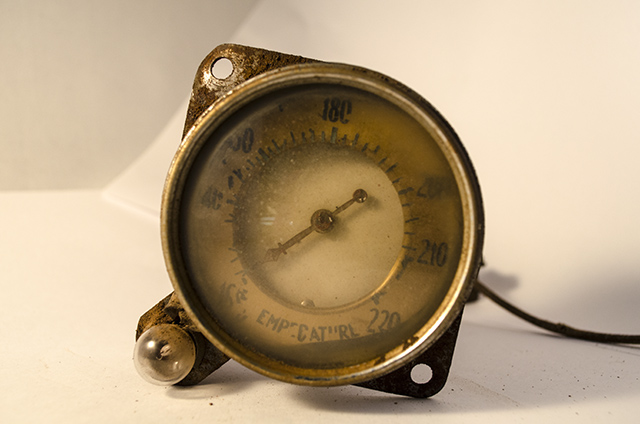 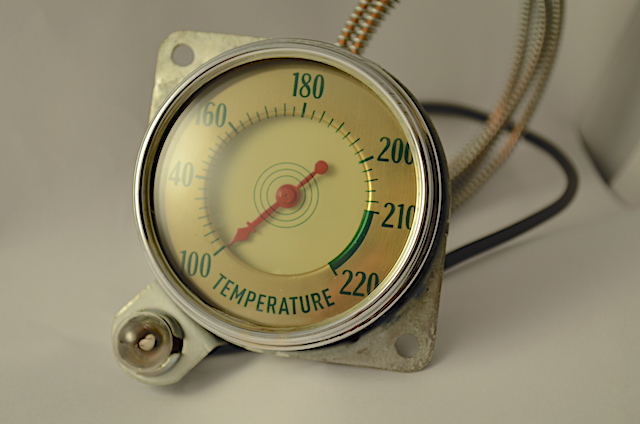 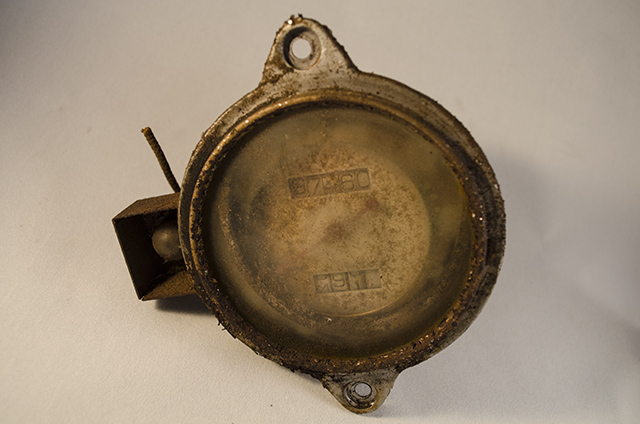 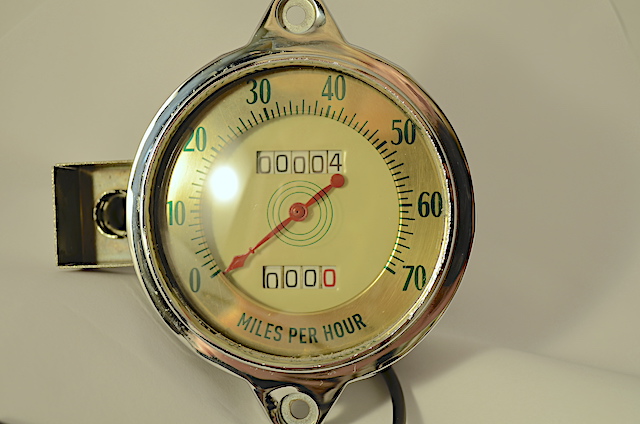 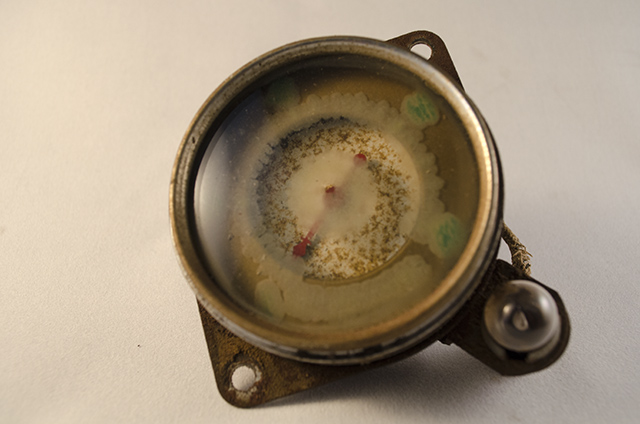 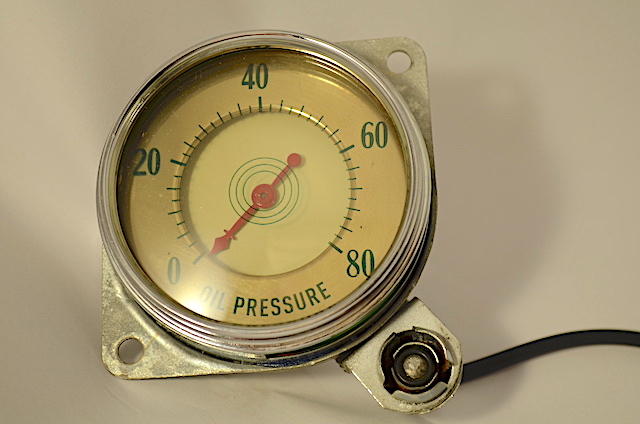 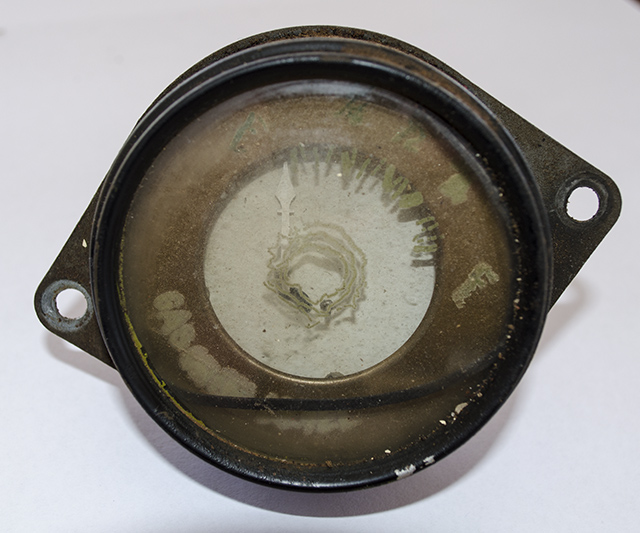 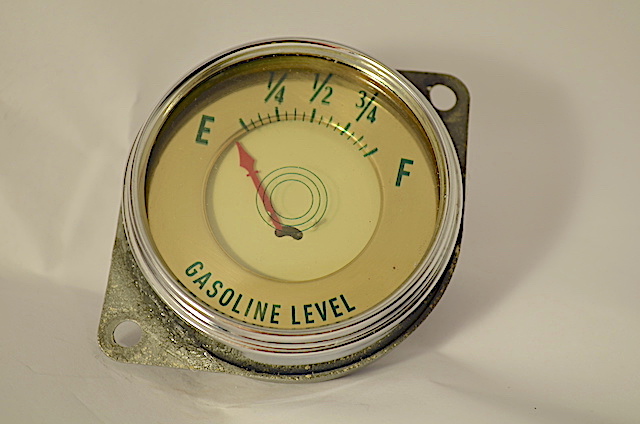 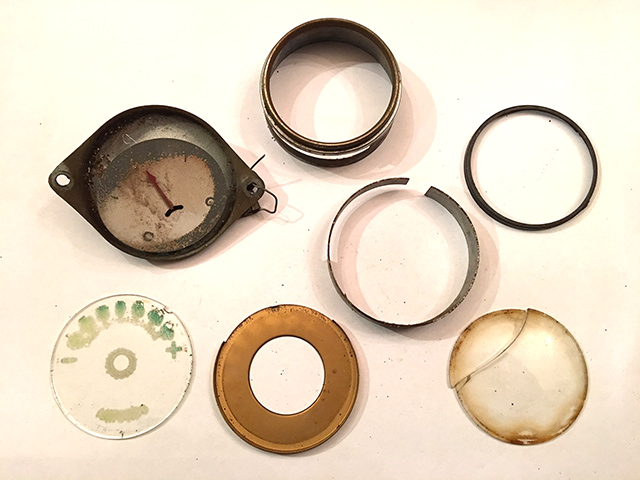 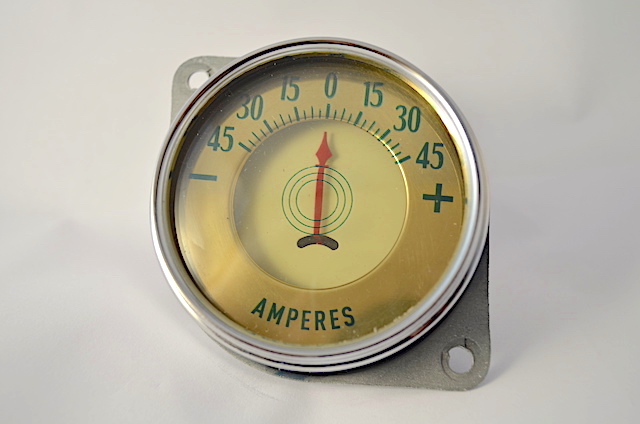 “If it had wheels, it used a Stewart Warner instrument.” That is the slogan that appears on the Stewart Warner website today. It is an iconic brand name that is synonymous with automotive history.

In 1905, John K Stewart and Thomas J Clark formed Stewart & Clark Manufacturing Company and produced mainly speedometers. Just two years after the formation of their company, Thomas Clark was tragically killed when the Packard he was driving skidded off the road and rolled. The accident occurred while Clark was demonstrating one of the Stewart & Clark speedometers during his participation in the 1907 Glidden Tour.

Following Clark’s death, John Stewart continued with the business and in 1910 began supplying the Stewart Speedometer to Henry Ford for use in the Model T.

A small manufacturing plant was erected on Diversey Parkway in Chicago but as the business expanded, so did the size of the plant. 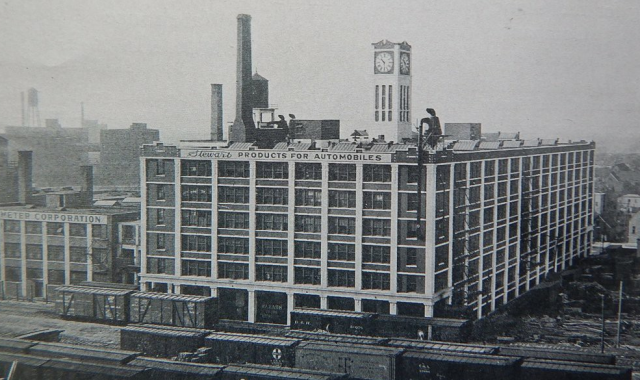 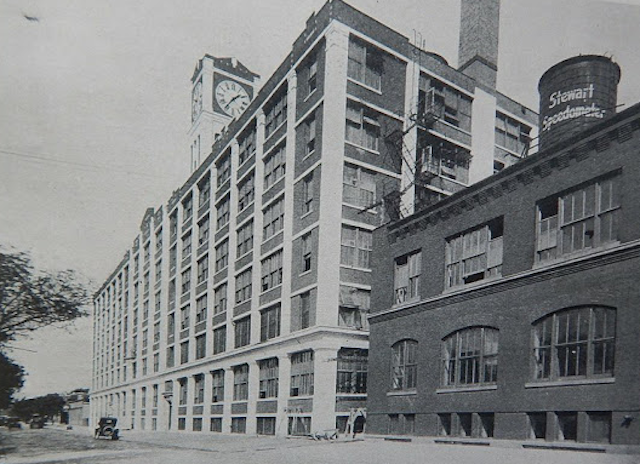 At its peak, Stewart-Warner employed 6000 people at the Diversey Parkway site.

The company was acquired in 1987 by British Tire & Rubber, and all operations were relocated two years later to Juarez in Mexico. This left yet another giant manufacturing plant abandoned within the motor vehicle industry. A fire destroyed most of the vacant buildings on April 25, 1993, and the remaining structures were demolished and replaced with condominiums.

The Stewart-Warner brand still exists today under the ownership of Actuant Corporation.

George William Borg (1887-1960) was one of the founders of the Borg-Warner Corporation. He started a joint venture with William Greenleaf in 1926 to develop automotive clocks, but this partnership, trading as Borg-Greenleaf Corporation, lasted less than 18 months.

In 1927, Borg formed the George W. Borg Corporation, and purchased a seven storey building in E. Ohio St, Chicago. His first clocks appeared in 1928 and customers included Buick and Studebaker. Borg priced his clocks at the lower end of the market so demand was high. Before long, Borg clocks were being sold as factory equipment in all the major car lines. This included General Motors, Ford and Chrysler.

In 1937, Borg relocated the clock manufacturing to Delavan, Wisconsin and continued to be a major supplier of electric automobile clocks to all the leading car manufacturers. Borg merged with Amphenol in 1958 to form Amphenol-Borg but by the mid 1960s, the word Borg had been dropped from the corporate name.

The overall recovery of the gauges was a team effort so we would like to thank and acknowledge Mitch once again for his artwork and graphics, Alan and Watch World Ltd for reconditioning the clock movement, Richard and Keiron for helping with the transportation of the gauges, and Bruce for the repairs, restoration and revival of these classic instruments.