We have used a Hiab to lift the freshly painted Heil tank onto the chassis. Steve has begun fitting the Texaco letters, rails and lights to the tank, and the cab has been positioned for a trial fit.

It had always been Steve’s intention to reassemble the truck here at home. He planned to use chains and a pulley system to lift the tank once it was painted but then tragedy struck in November 2019 that changed his mind.

Steve’s long time friend and ex-business partner, John (Jock) Hinton, was tragically killed that month while unloading a piece of machinery on his own. His untimely death affected many people and reminded everyone how quickly and easily things can go wrong. The morning following Jock’s accident, Steve said that when the time came to lift the tank, we were going to use a Hiab.

Rolling forward to January 2021, Jock was at the forefront of our thoughts as we remembered an exceptionally talented and creative car builder, a character with an incredible sense of humour and someone we were all proud to call a friend.

With the tank now painted, it was time to book a Hiab. Our main concern was to find a highly skilled and careful operator to position the tank in place. Steve discussed this with our nephew, Lance Pelham, who deals with the commercial transport industry in his field of work. Lance knew exactly who he wanted to use for the job and his recommendation proved to be spot on. 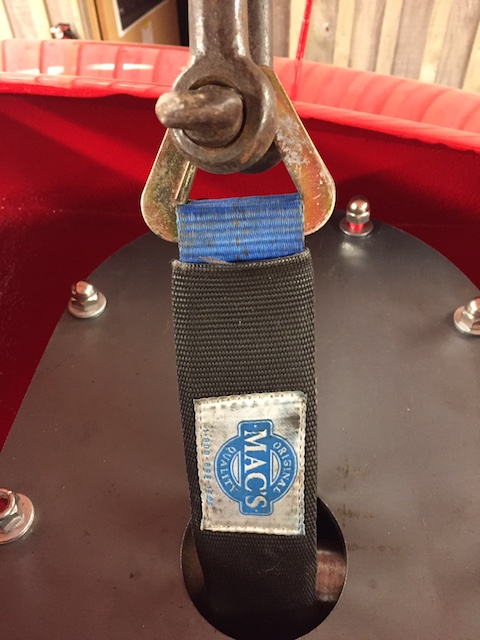 Steve then considered various ways of safely lifting the tank. Prior to the Hiab arriving, he decided to tack weld 2″ solid steel bars to the inside of two of the tank covers. This would create strong lifting points at spaced intervals and would logically balance the load.

He would then use Mac’s tie down straps from Mac’s Equipment with heavy d-shackles as a way of connecting the 2″ bars to the lifting slings. 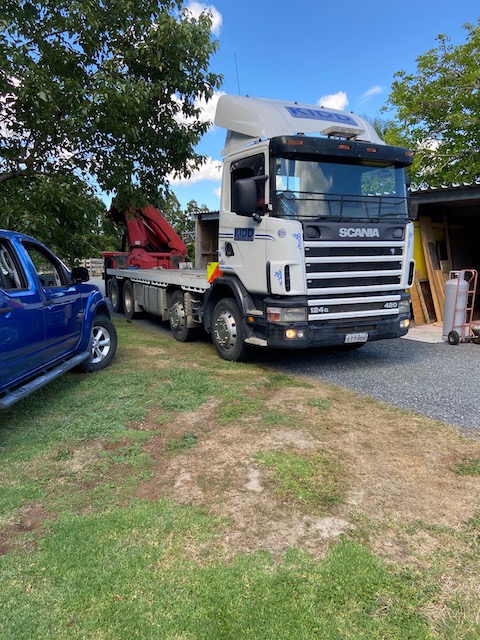 In early January, a Hiab owned by Kidd Contracting Limited in Takanini arrived to lift the tank. In charge of our precious cargo was Mikaere and Terry, along with Lance who came to lend a helping hand. 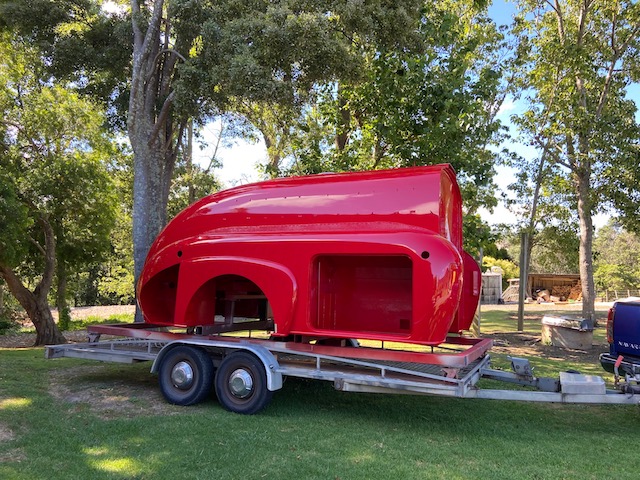 The tank was still on the trailer and sitting on its mobile frame. The first task of the day for Steve was to persuade Mikaere that the 2″ bars inside the tanks were going to work! 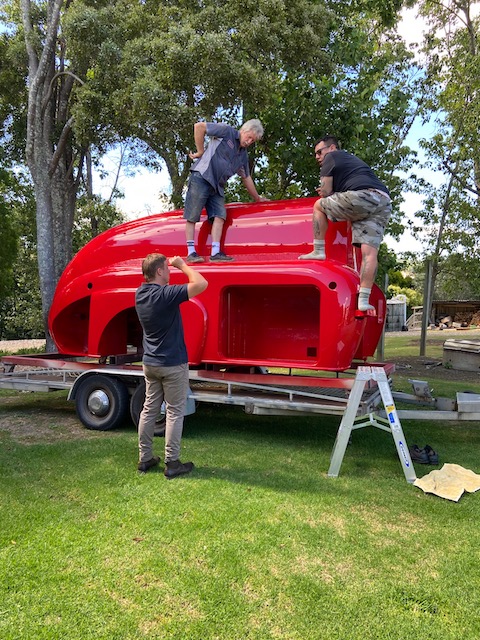 Lance (left), Steve and Mikaere going over the plan and checking the lifting points. 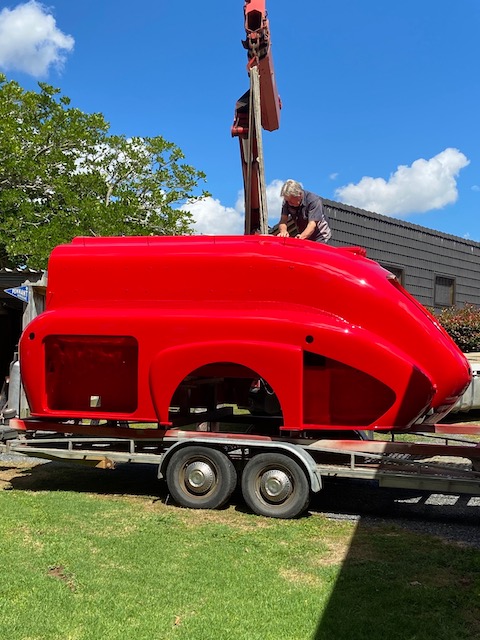 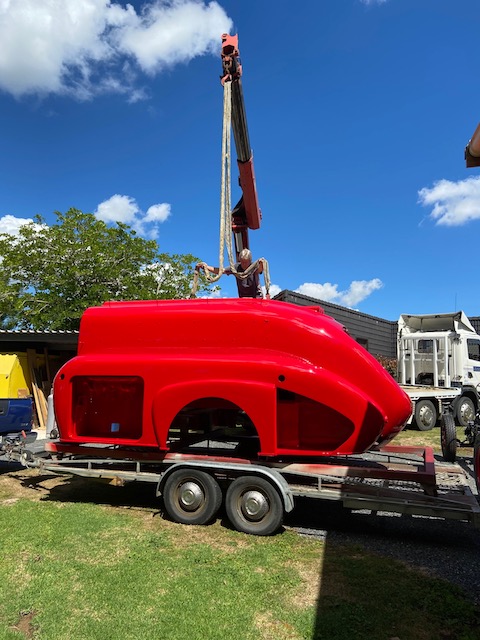 Steve secured the d-shackles to the Hiab lifting slings and then Terry slowly lifted the boom until all the slack was removed.

The moment of truth had arrived. We were about to find out how balanced and level the tank was as it was carefully lifted off the rotisserie trolley it had called home since May 2018. 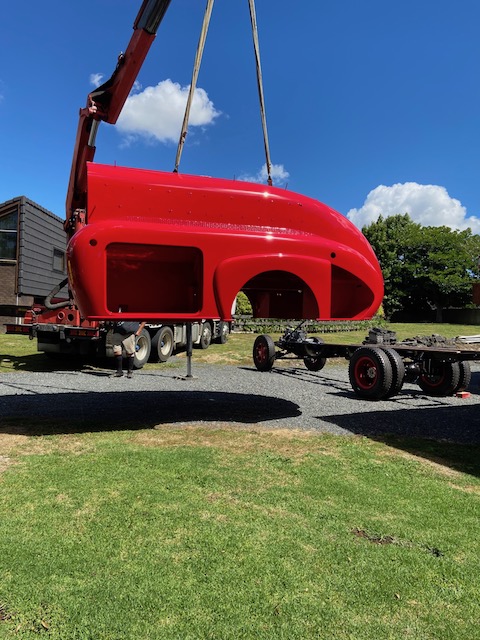 With the load stable and balanced, Terry made the process look simple as he skillfully manoeuvred the Heil tank around to the chassis which was parked behind the Hiab. 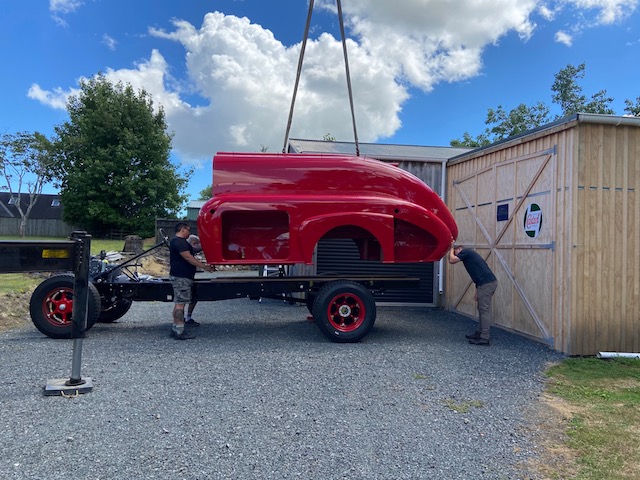 With Terry at the controls, Mikaere, Lance and Steve checked the positioning as the tank began to be lowered down to the chassis. 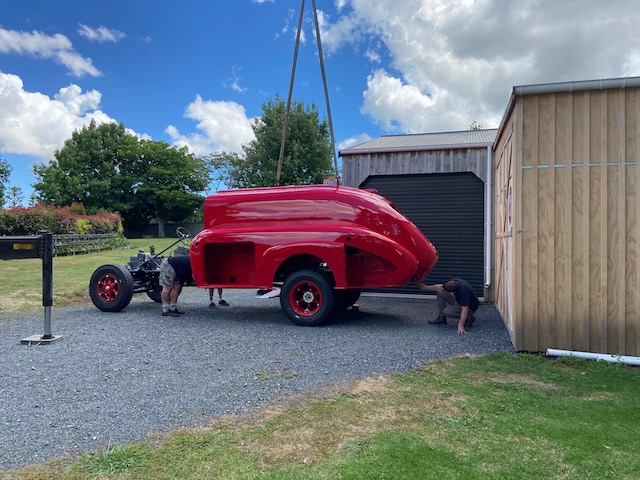 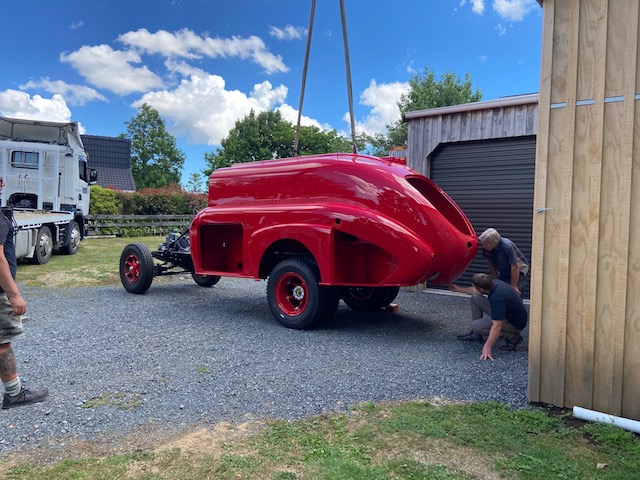 Some blankets were spread out over the chassis before the tank was lowered any further to protect the paint while the final checks were made. 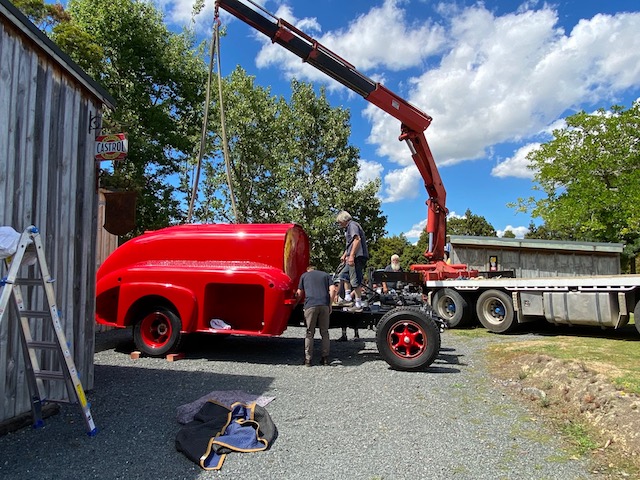 Touchdown. The tank was safely and precisely in place. 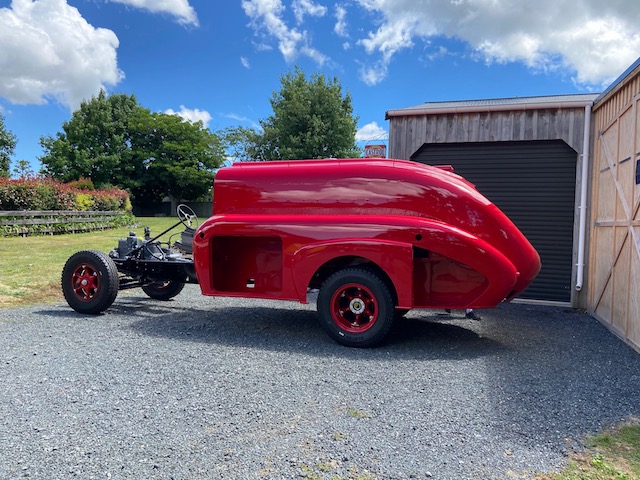 We can’t thank Terry, Mikaere and Lance enough for their help. Hearing the words “as long as it takes” before they started was very reassuring to us both. There were no shortcuts taken and nothing was rushed throughout the entire time.

Mikaere and Terry were in sync with each other and are such a skilled team. We very much appreciate their patience and the care that they took to safely transfer the Heil tank back onto the chassis.

Our thanks to Lance also for his top recommendation and for organising the Hiab.

Behind The Term ‘Hiab’

Although this is not relevant to the tanker restoration, I thought it might be of interest to some and worth a quick mention.

Steve always referred to loader cranes / truck cranes as Hiabs and assumed that this term was used to abbreviate a technical name. I looked it up to check whether it was hyphenated and was surprised to find it isn’t an abbreviation at all.

It turns out that HIAB is actually an acronym for the Swedish company, Hydrauliska Industri AB.

Founded in 1944, Hydrauliska Industri AB invented the first hydraulic truck-mounted crane in 1947 and used the acronym ‘HIAB’ as their brand name.

I wonder if the company ever imagined that more than 70 years later their brand would be used universally to describe loader / truck cranes in general. Another little snippet of history discovered on our restoration journey!

As soon as the truck was back in the shed, Steve began fitting the hand and toe rails and the enamelled Texaco lettering on the left hand side of the Heil tank. 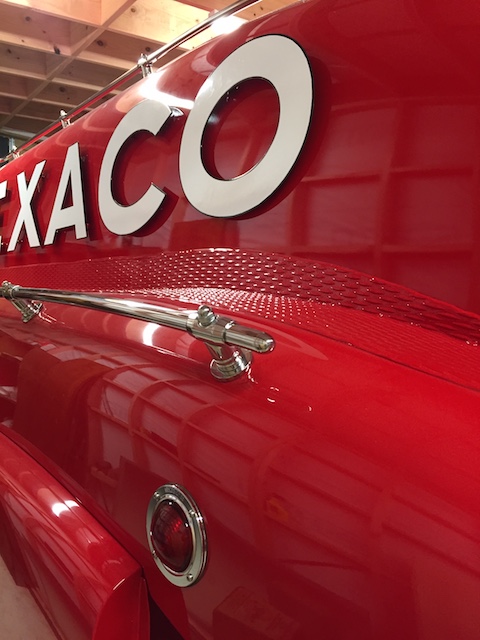 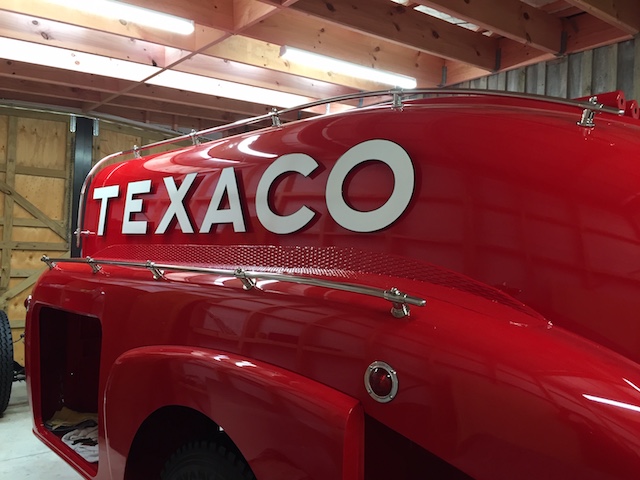 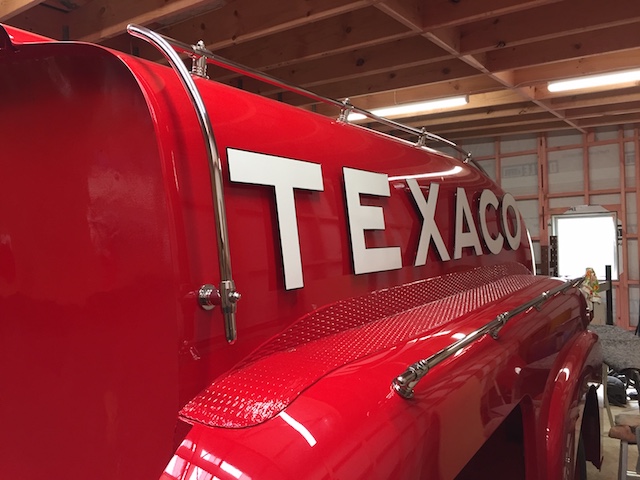 Although there is so much more to do, this really does feel like we are getting there. A bit premature perhaps without the cab finished but it sure is fun! 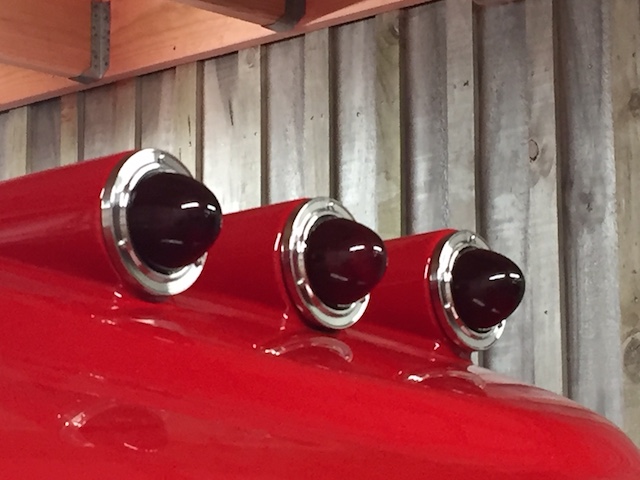 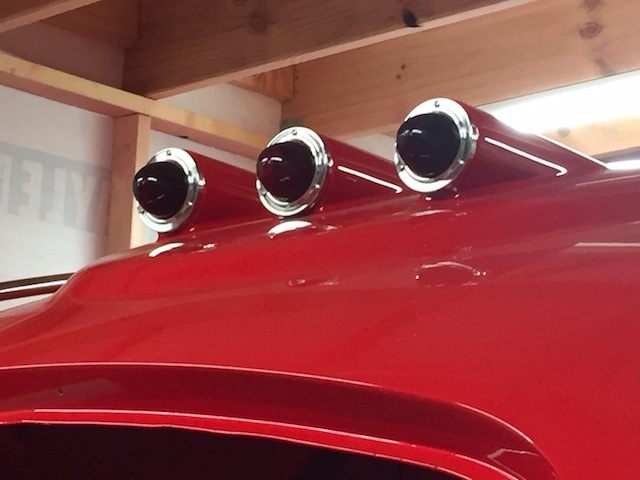 We only had the original amber marker lights on top of the cab when we bought the truck. The lenses were made by Dietz so we set about trying to find matching lenses for the rear of the tank.

Steve had new bezels made at Marlin Tooling. He fabricated the bases and installed new bulb holders along the three light positions.

Just recently I spotted some red Dietz lenses on Ebay and managed to buy the three that we needed. They were whisked away as soon as the package arrived here at home and are now proudly in place above the trunk.

Before going any further, Steve and Rowan discussed the cab and decided that it should be test fitted on the chassis to check the door gaps, etc. 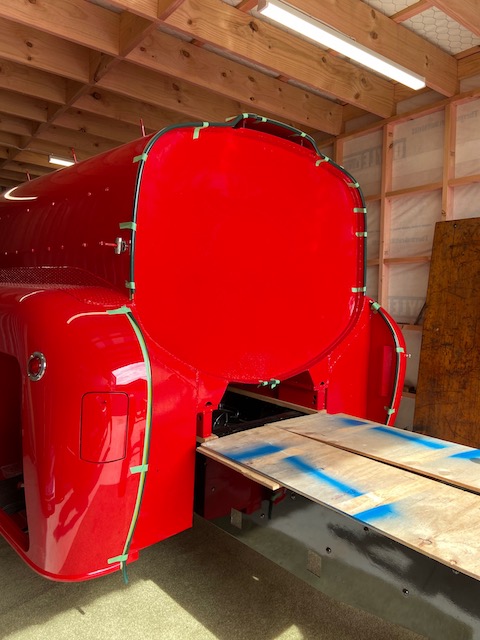 Steve split a hose and taped it to the front edge of the tank for protection.

He made some calls to local friends and family and got everyone together last week to help lift the cab on. 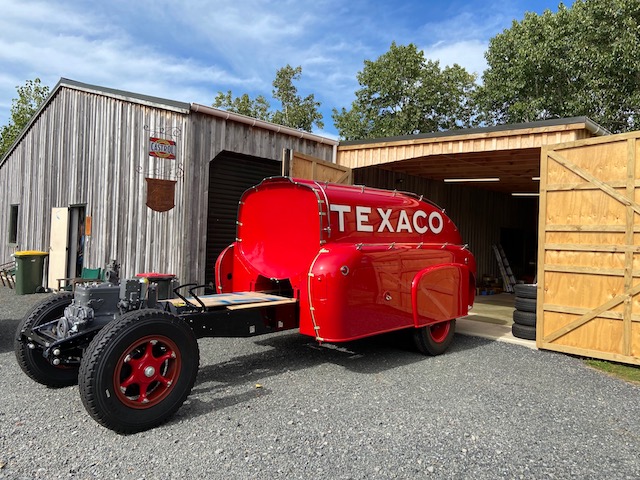 The truck was pushed outside again, this time displaying the newly fitted spats / fender skirts. 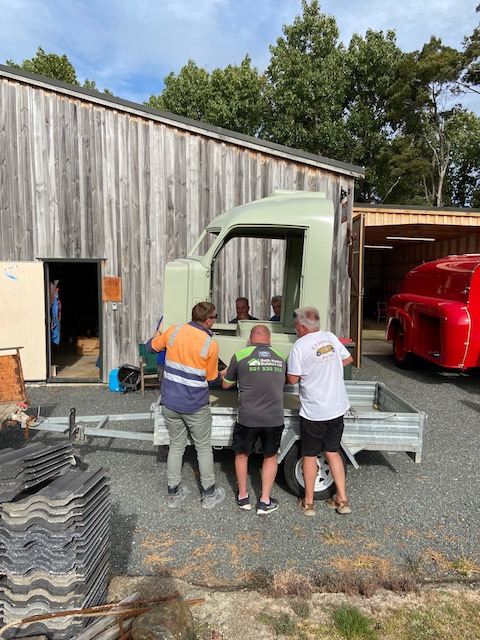 The first trick was to lift the cab off and above the mobile trolley that it was mounted on. 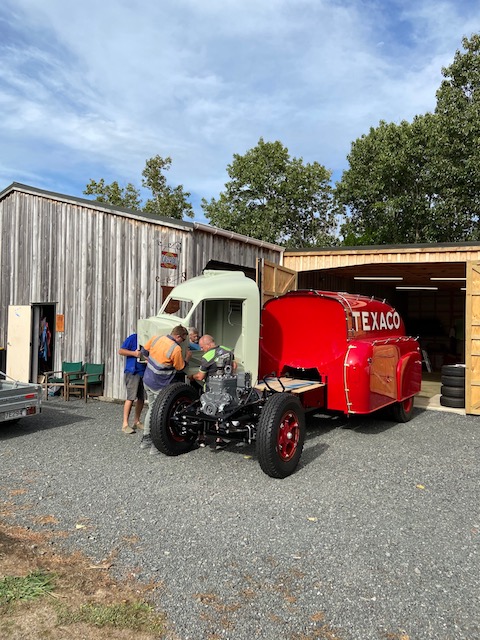 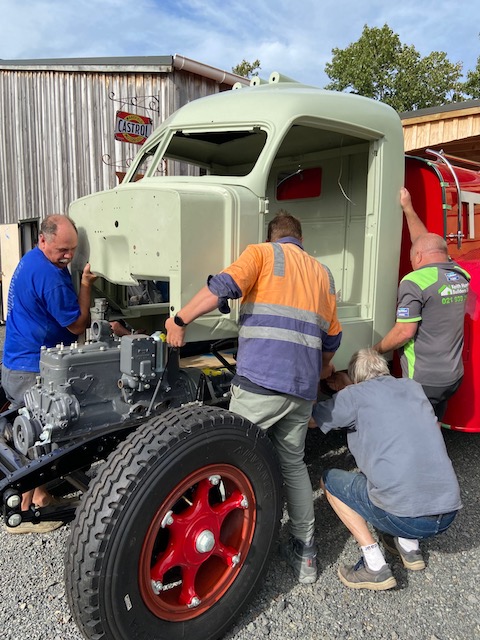 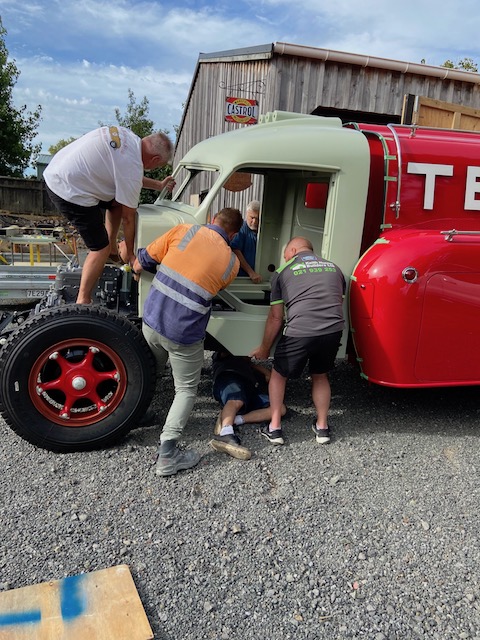 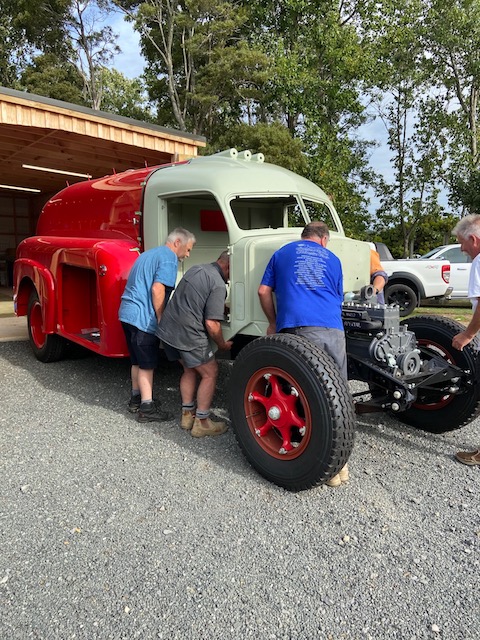 The second challenge was to work around the pedal assembly that Steve had kindly left bolted on! 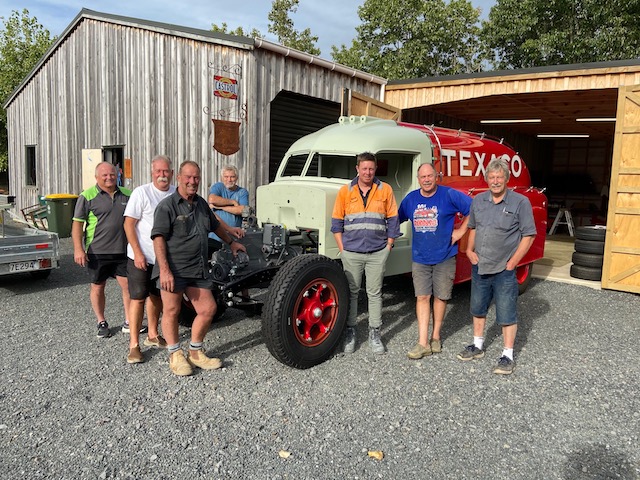 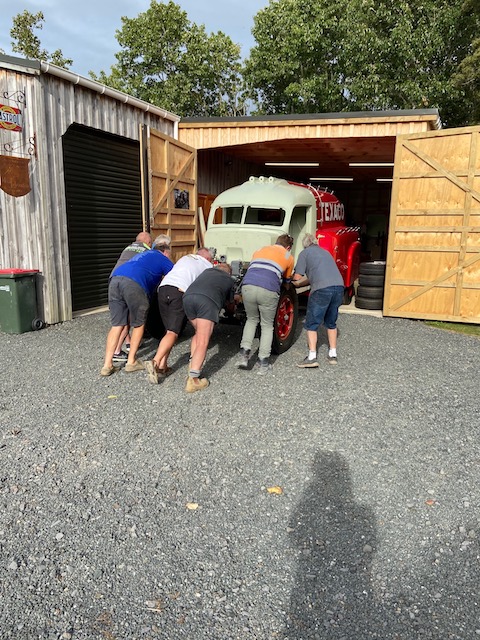 The final job for the afternoon was to push the truck back inside, followed by some cold refreshments…..

Our appreciation and thanks to all the guys for making the time to come and give Steve a hand. If the team is happy to come back and lift the cab off in a few weeks, we promise the pedal assembly will be removed first!