The fabrication work and repairs on the Heil tanker over the past month have continued to challenge the team at Creative Metal Works. Simon and Craig have battled with the heavy 16 gauge steel, and the extensive amount of lead that was applied during construction. 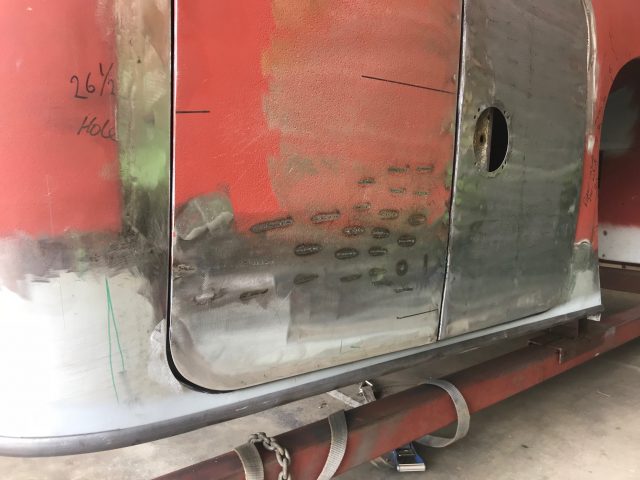 As the forward locker compartment doors were being fitted, it became evident that further work was required on the door skins. Taking a line of sight along the sides of the tanker, the doors appeared to bulge out slightly due to too much shape in them. This was caused in part by damage to the doors, and the outside edges being leaded to hold the skin to the frame.

To achieve a clean line, the lead between the skin and frame on the edge of all four of the forward doors had to be entirely melted out. The process then involved shrinking the skin, drilling and plug welding through the skin to the frame, grinding the welds and hammering up the edges on the door frames. 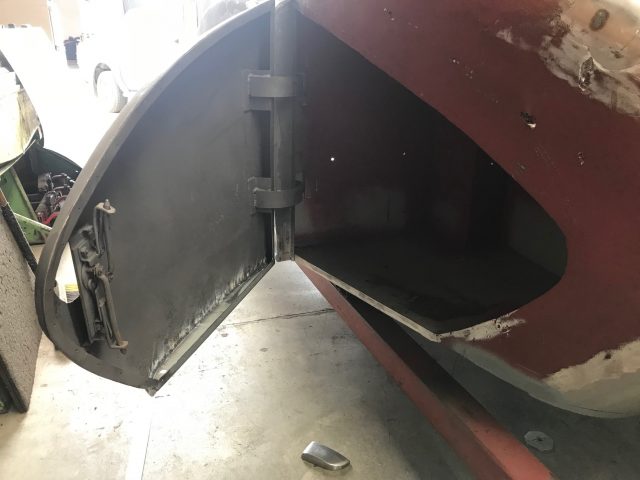 There has been a substantial amount of work in cutting, welding and reshaping all the locker compartment door hinges as most had been gas cut off the tanker.

In addition to repairing the hinges, there has been significant repairs made to the hinge mounts and pillars due to metal fatigue and rust. 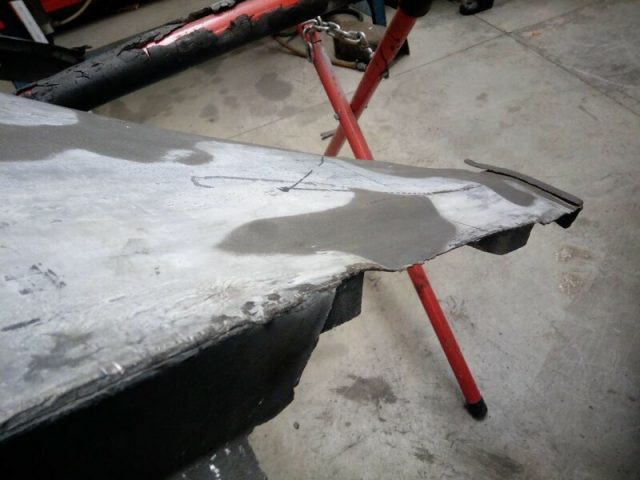 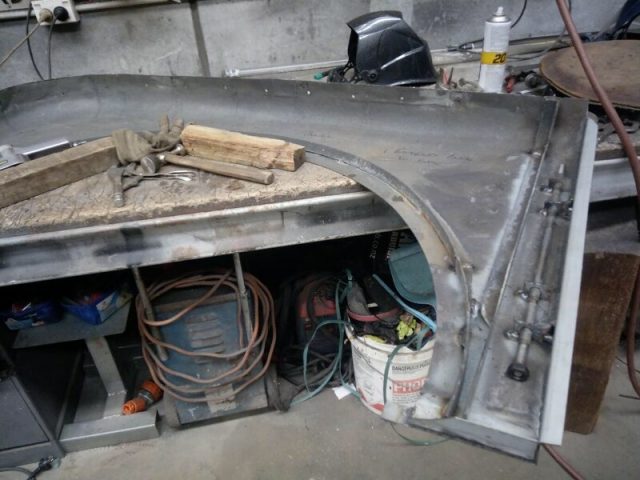 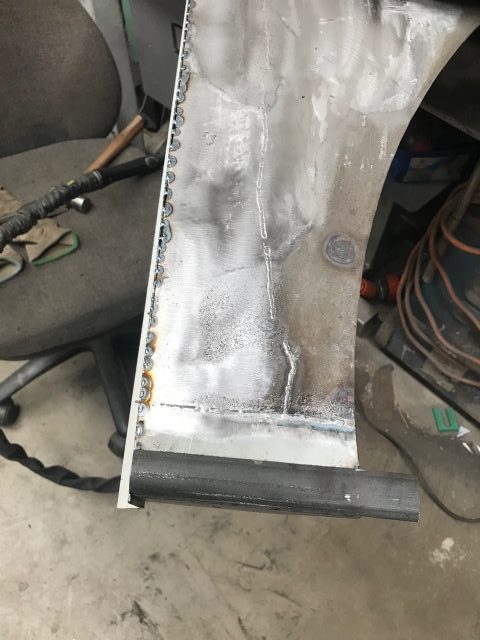 The right rear locker door had been gas cut off in the States and this resulted in damage to the edge of the rear outer guard.

The inner frame sections were removed from the outer guard, and a new steel rear edge section was made up. The frames, and the hinge mounting points, were repaired and then welded back in. 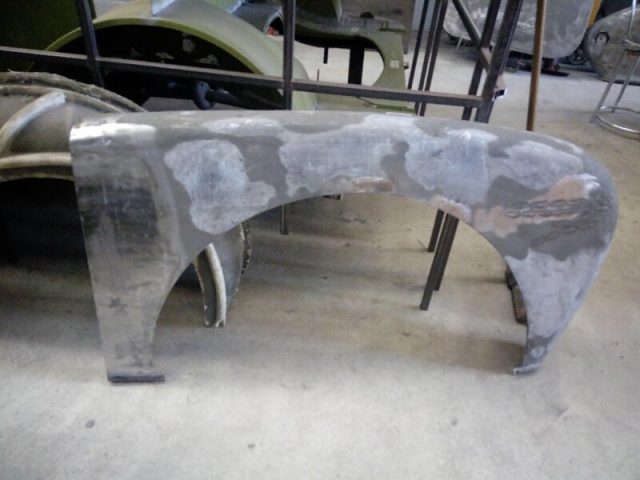 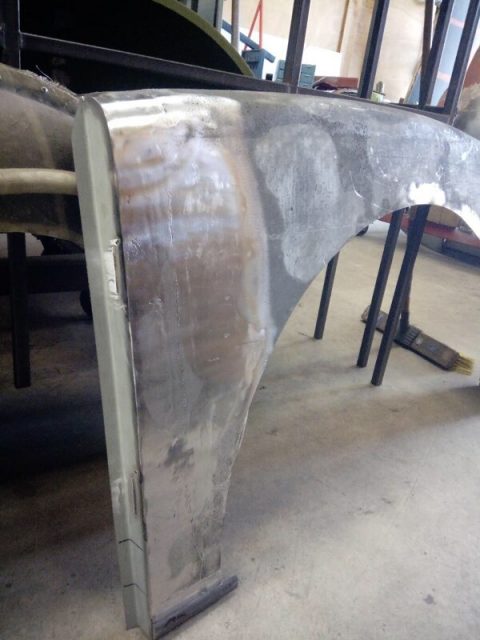 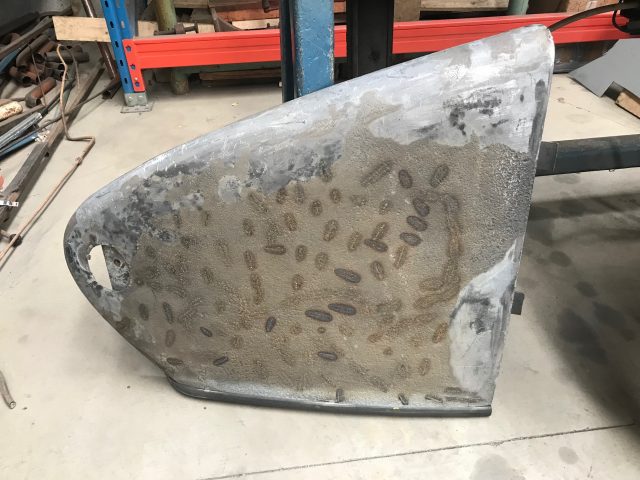 Shrink marks are evident on the right rear locker door, and the hole for the door handle can be seen on the left hand side. Access is gained to the multiple valve selector and bottom operator through this door. 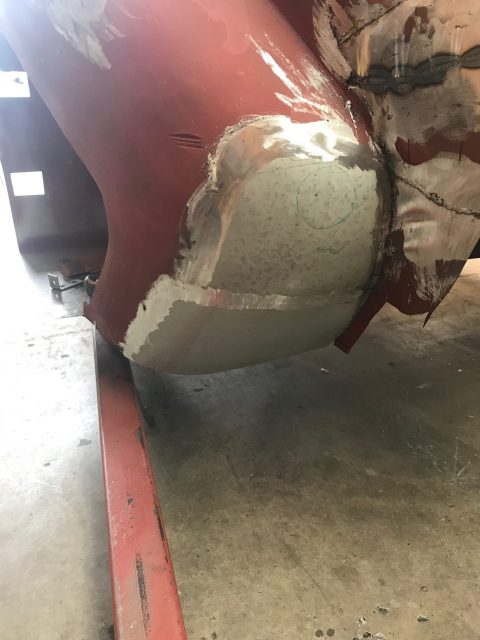 Lead was melted out around the left tail light area at the back of the rear guard. A new corner section for the tail light was made up and welded in place. To complete the rear of the guard, a new lower section of steel was wheeled up and welded. 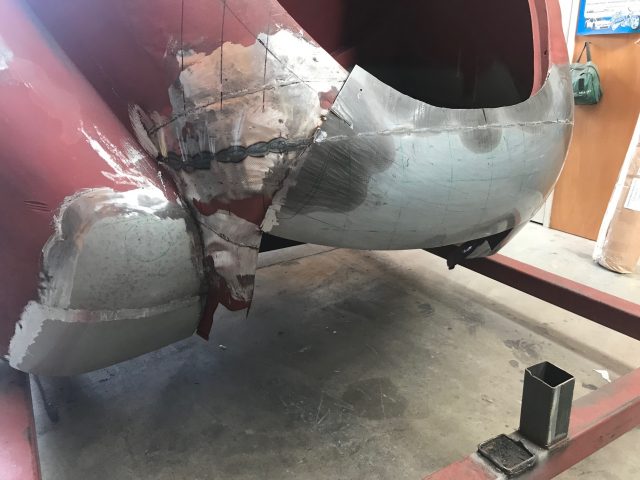 Simon then concentrated on finishing the shaping on the upper “bowl shaped” centre panel below the trunk lid. 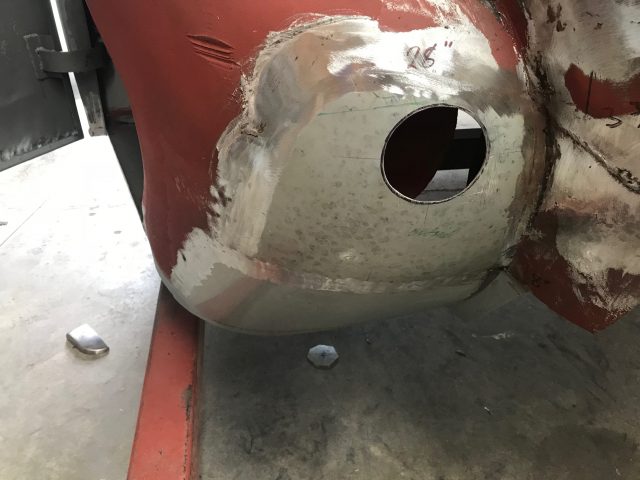 A hole for the left tail light was cut out and the tail light housing was welded into place. 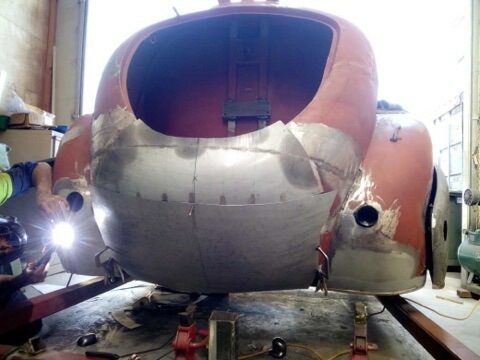 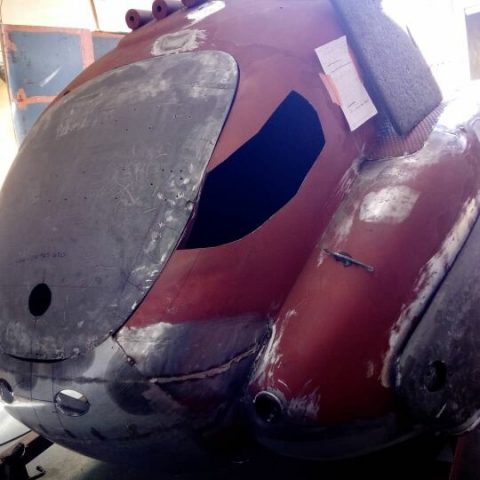 The area to the right of the trunk lid had sustained damage from one (or several) of the rear impacts that had occurred over the years. Simon cut the entire damaged area out and made up a steel repair section. 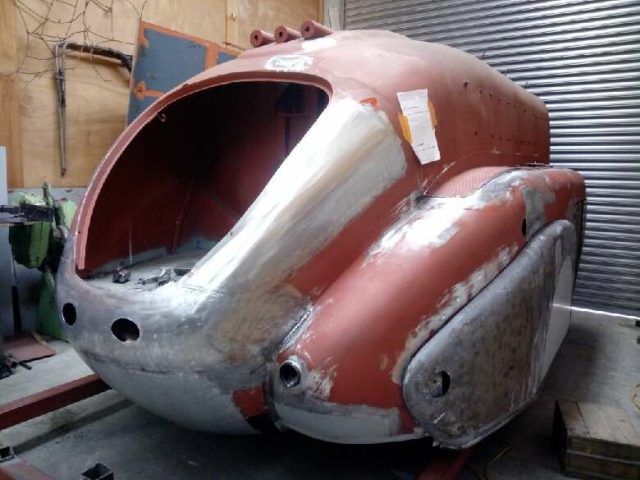 The repair section was welded back in to the right of the trunk lid and holes were cut in the upper centre panel for the turn signal lights.

As well as all the remaining work to be done to finish the tanker, Steve also asked Simon to make some spats for the rear wheels.

Spats are also referred to as fender skirts. They were factory produced from the thirties but are noted as being used as early as 1928 on a Stutz during a land speed record attempt.

The benefit of these spats / fender skirts was to prevent air from entering the wheel arch, which in turn reduced the drag coefficient of the vehicle they were fitted to. It appears from promotional brochures that they were almost always used on the streamlined tankers and formed an important part of the aerodynamic design. 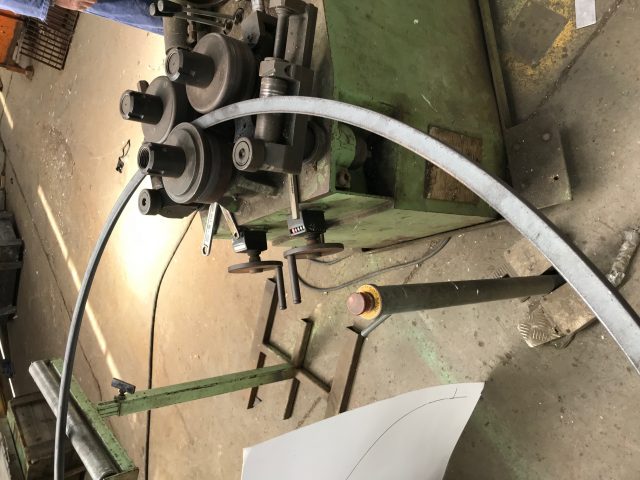 Steve asked Manukau Sheetmetals to roll up the steel angle that would be used for the spat frames. 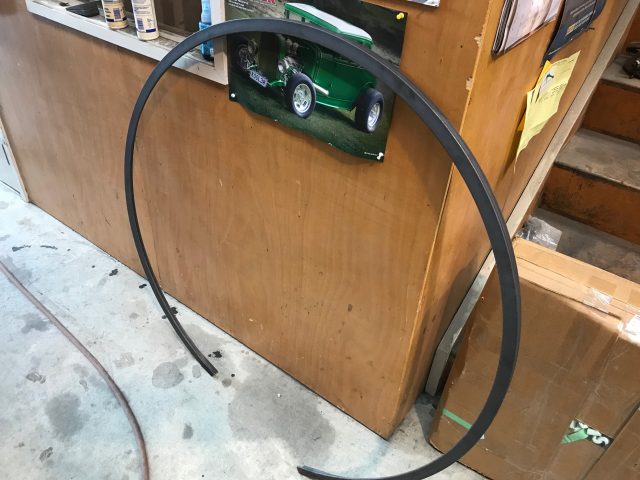 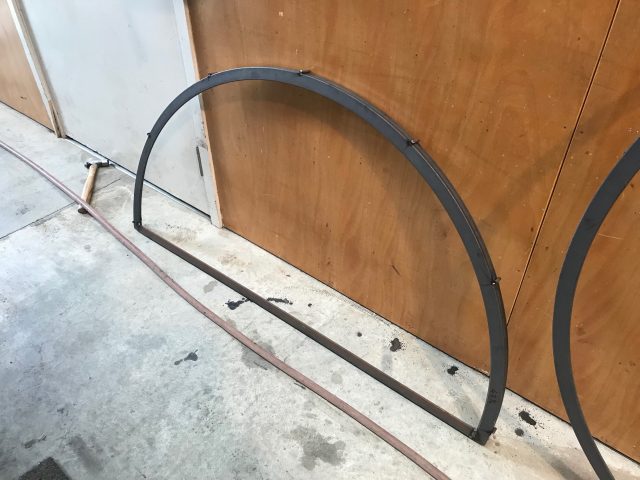 Creative Metal Works made up left and right rear spat frames to shape and support the skins, and attached mounting pins to the frames. 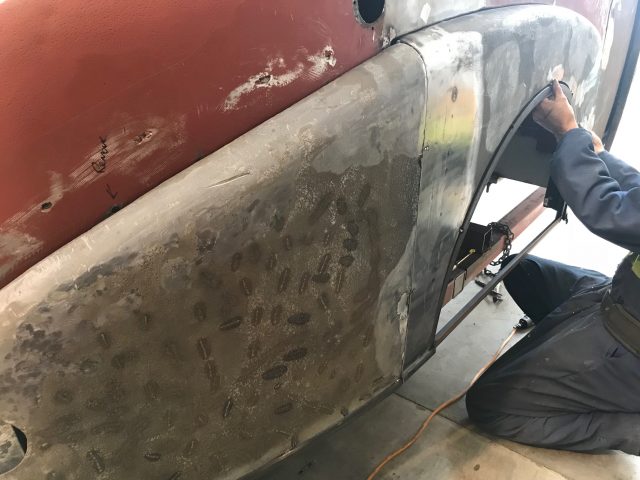 The spat frames were fitted and welded on to the rear outer guards. 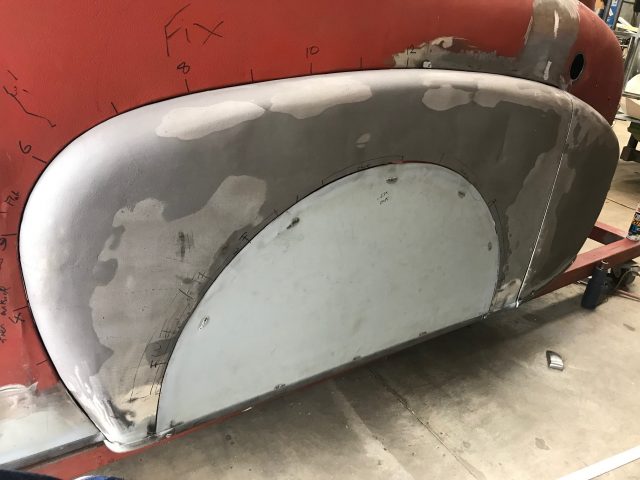 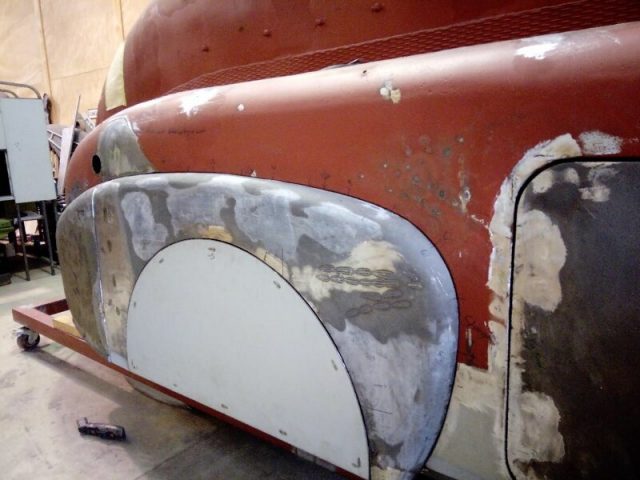 Custom-made skins were cut out and welded to the rear wheel spat frames. They are not permanently fixed to the outer guard and can be removed to gain access to the wheel and tyre.

The Half Round Trim

All of the rusty half round steel that remained on the tanker was cut off and the areas underneath cleaned up and treated.

The replacement steel trim imported from the States was painstakingly rolled and formed prior to fitting. 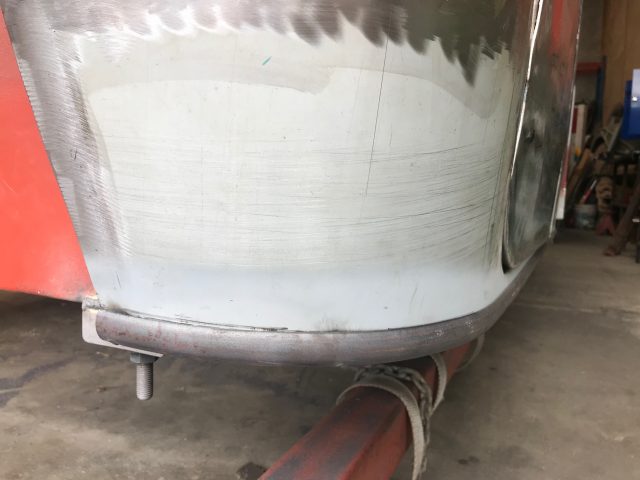 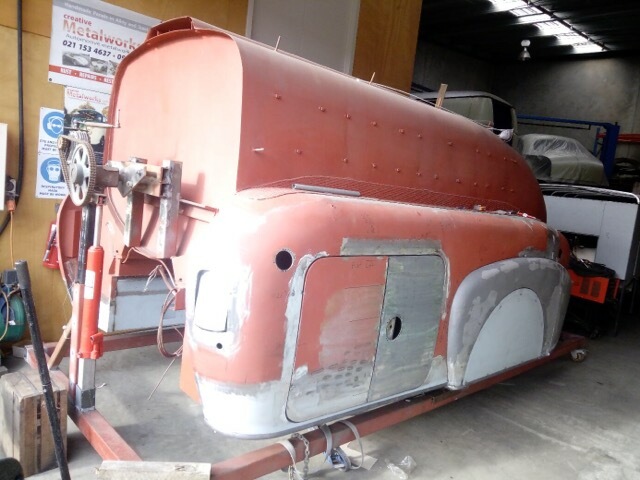 The steel had to be heated in order to bend it around the corners and the rear centre panel. The trim has now been welded to the entire base of the tanker and looks absolutely superb. 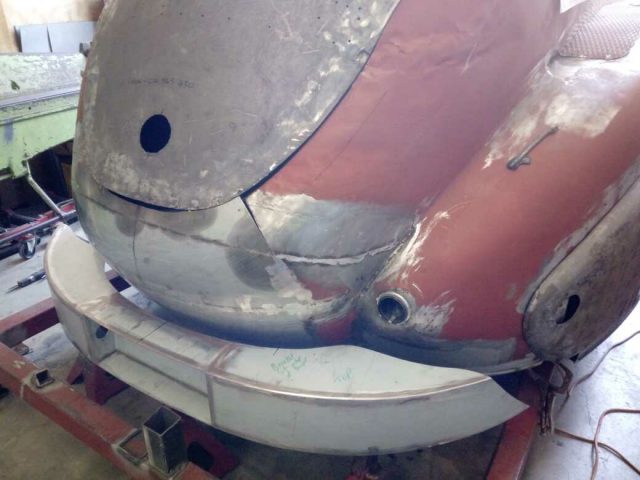 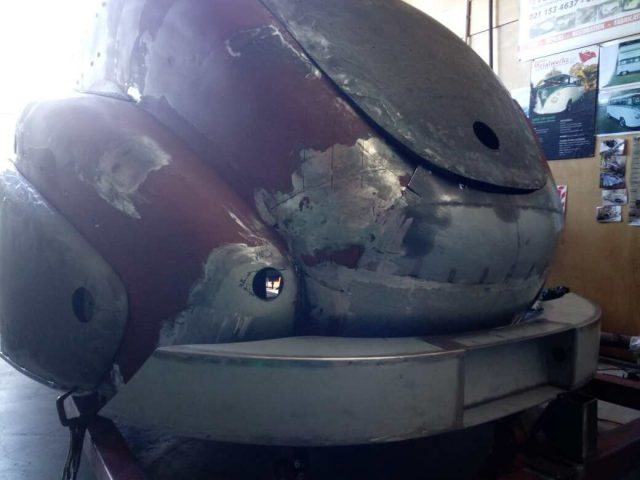 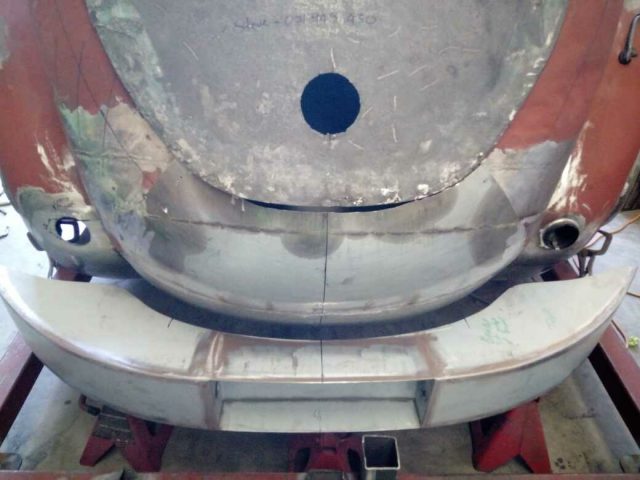 The rear bumper has been trial fitted by positioning it behind the tanker.

During this exercise, and as Simon has worked his way around the tanker, a number of minor differences in measurements and workmanship has been discovered between the two sides of the tanker.

This is no surprise given the non-automated construction and the number of coach builders working on each of these builds. There were probably several workers on each side of the tanker, each having different skill sets and abilities.

All the little flaws in this tanker are representative of the reality of coach building in this era. It is remarkable that the craftsmen achieved the near perfect accuracy and precision that they did when constructing these visual beauties.

The following before and after photos show the amazing transformation of the tanker, and the talent and skill involved in getting it to this stage. We are just in awe at the results achieved to date at Creative Metal Works.

It is difficult to comprehend the sheer hard work involved in hammering and shaping the heavy 16 gauge steel, day in and day out. The gruelling repairs must be physically exhausting for Simon and Craig, so we are very appreciative of their ongoing dedication and perseverance to finish the tanker fabrication to such a high standard. They are almost there! 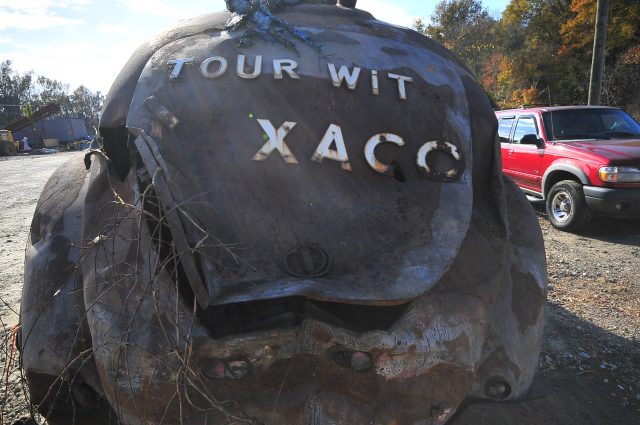 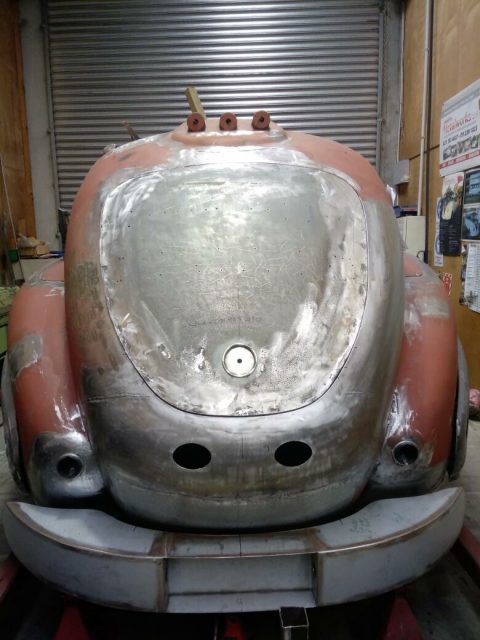 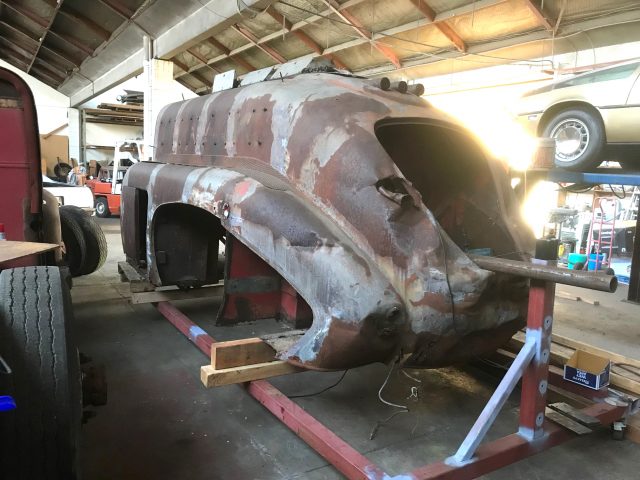 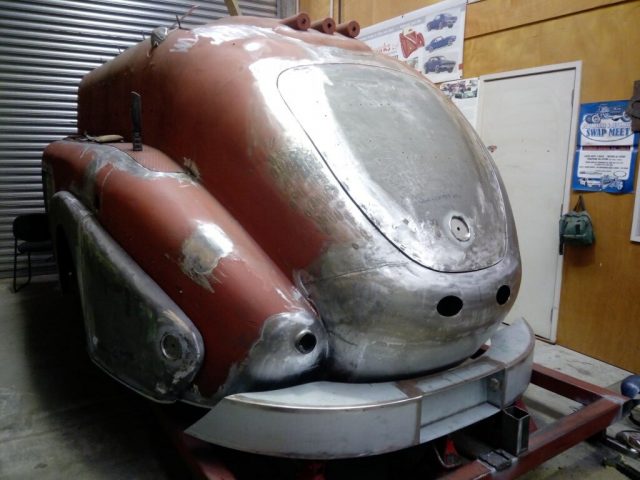