The first splash of red has been applied to the tank, albeit by way of a primer coat. The enamel trunk letters are now finished and a prototype has been produced of the Heil hand / foot rail pedestals.

For the past several months, Steve and I had been busy with preparations for the upcoming marriage of our son, Mitch, to the beautiful girl of his dreams, Allanah.

Having the wedding at our home meant the tanker project and updates were put on hold for a number of weeks. Of course, this didn’t mean that work stopped on all the various outsourced jobs that are currently being undertaken. Great progress has been made over this time in several areas and a special milestone has been reached.

The wedding just took place on Saturday 10th October and was, without question, the proudest day of our lives. Close friends who attended the celebration described the day as ‘magical’.

The one thing we would have loved to have added to the wedding to create even more magic would have been Steve driving Allanah to the ceremony in a stunning, red streamlined Texaco tanker!

Grant and Neville at Procote Industries in Dunedin have now completed the enamel process on the ‘Tour With Texaco’ trunk letters. 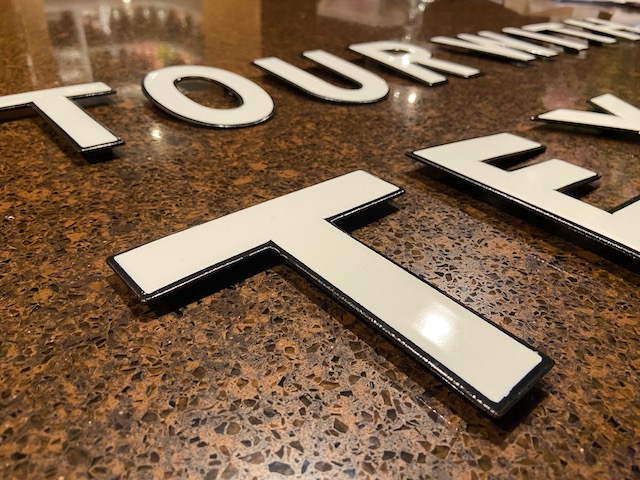 The entire process and techniques used were detailed in full in the update published in March 2019. 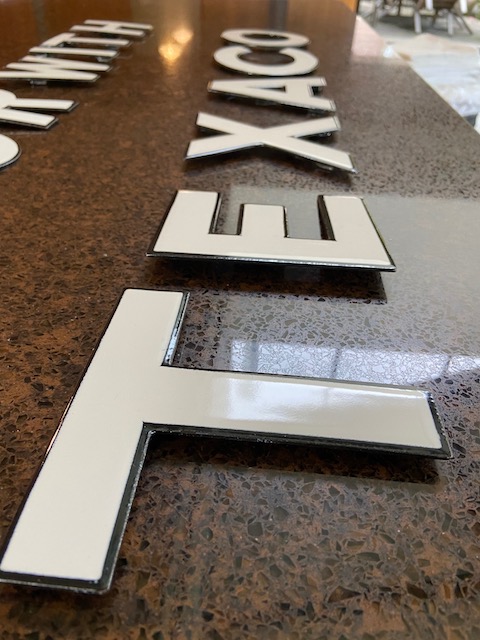 We have once again received handmade enamel letters, each with their own unique characteristics, and we are once again thrilled with the end result. 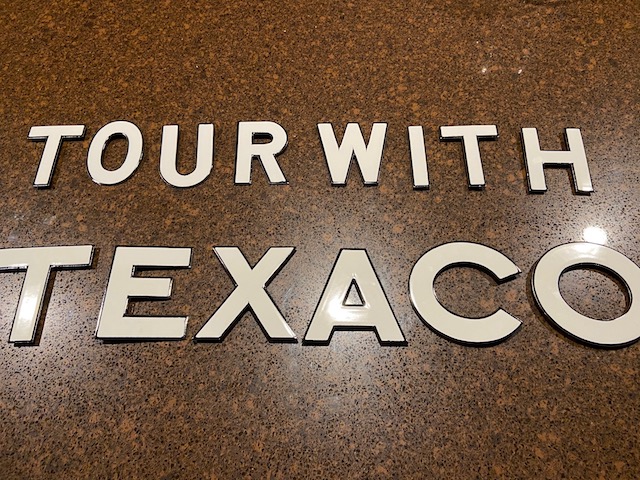 Our sincerest thanks to Grant and Neville for fully completing this area of the project, and to Graham Rollo who helped us again by shipping the letters back up to Auckland.

When the initial fabrication work was carried out on the tank by Simon Tippins and Craig Garland at Creative Metal Works, the Diamond T cab was not in their shop. This was mainly due to timing, space and Simon and Craig’s work commitments at the time. 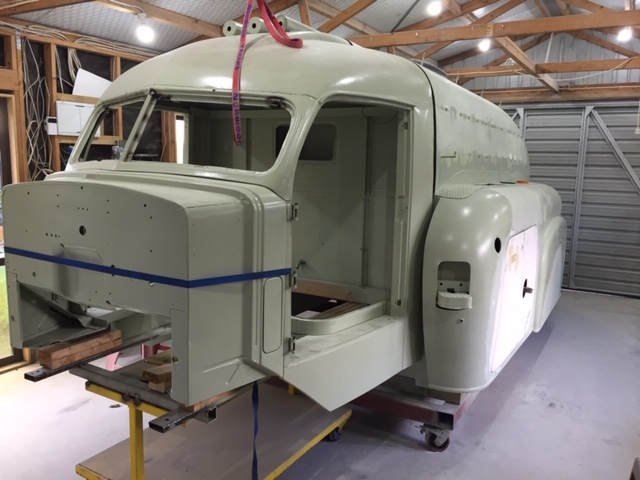 Rowan and Simon recently trial fitted the cab to the tanker for the first time since the restoration began in 2018.

They came up with a plan to bolt the cowl to the trolley that the cab was sitting on. To achieve the same height as the tank, they lifted the cab up by a further 110mm by mounting it on two 100mm x 100mm square box sections and welding in some mounting nuts.

With the cab pushed up against the tanker body, the centre section was found to be the perfect height. Each side of the cab roof however needed repairs to align the corresponding shape of the front of the Heil tank.

Simon used the same process on each side so the following photos reflect the overall repairs. 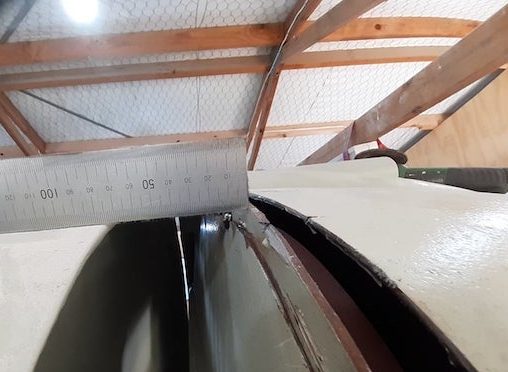 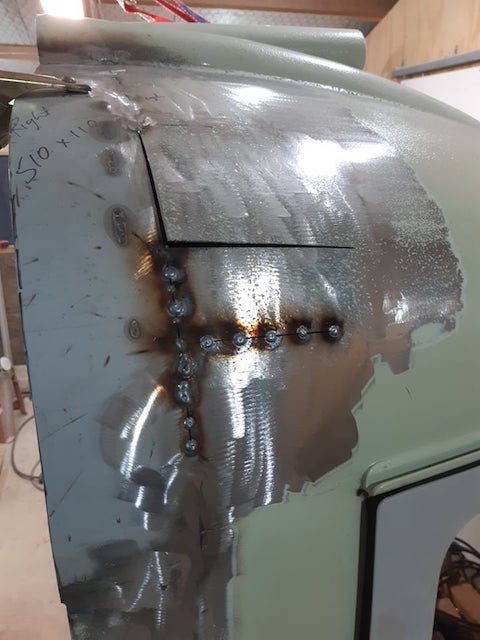 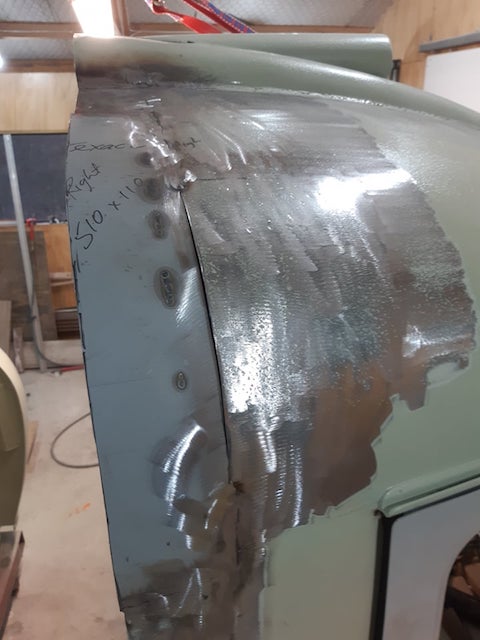 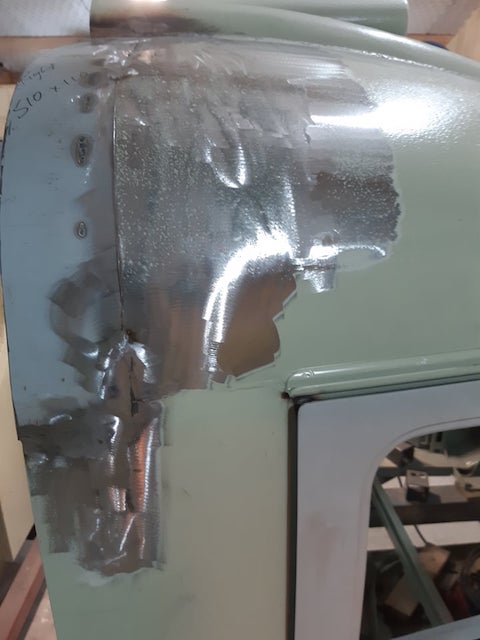 New repair sections were made up and tack welded in. Where there was too much shape in the roof, Simon pie cut these areas forward of the repair sections. 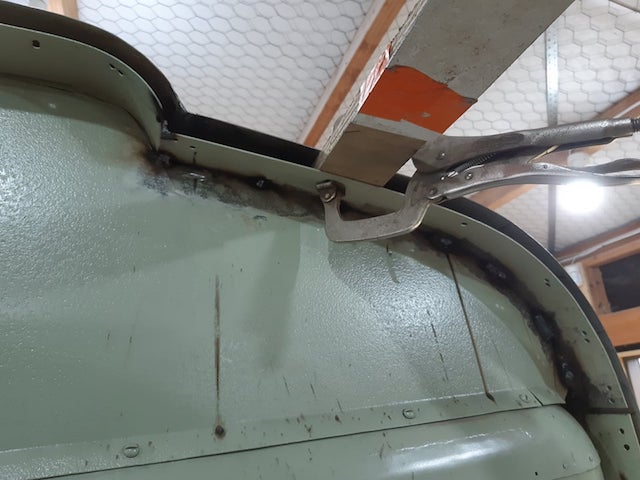 By slightly changing the roof height, Simon had to cut out where necessary the second inner frame  that holds the rubber between the cab and the tank. He then had to move and weld the inner frame to the correct new position. 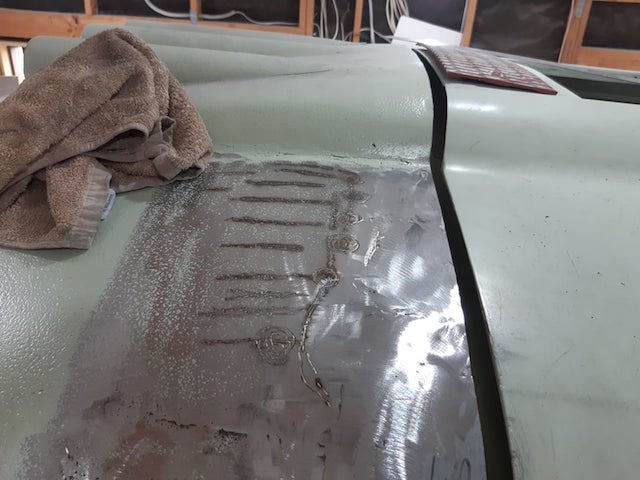 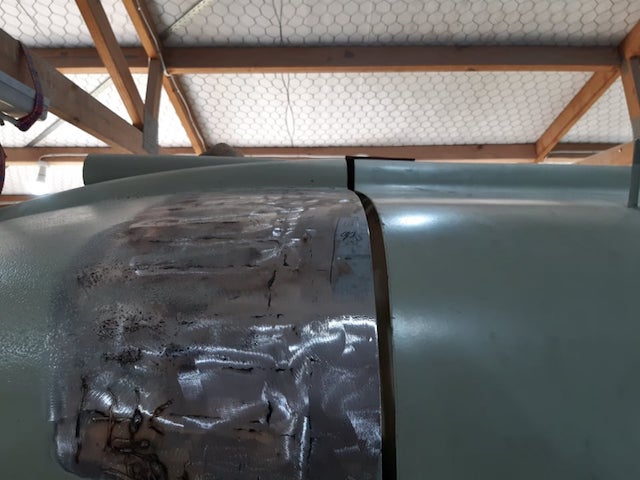 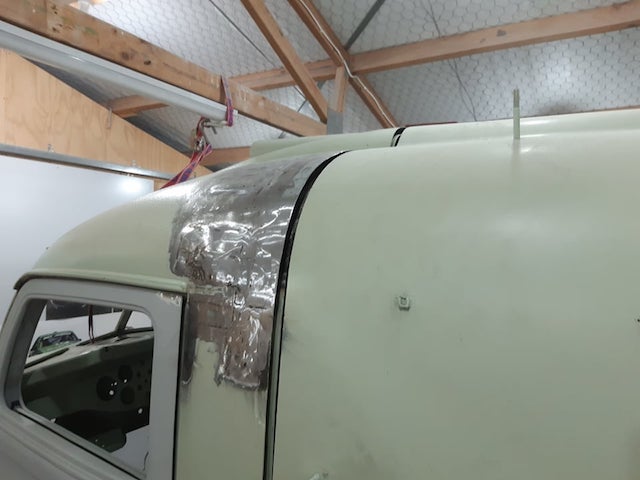 Simon used a carbon shrinking rod to shrink back the excess body roll between the cab roof and tank body.

These repairs have now achieved a perfect alignment of the rear of the cab and the front of the Heil tank. 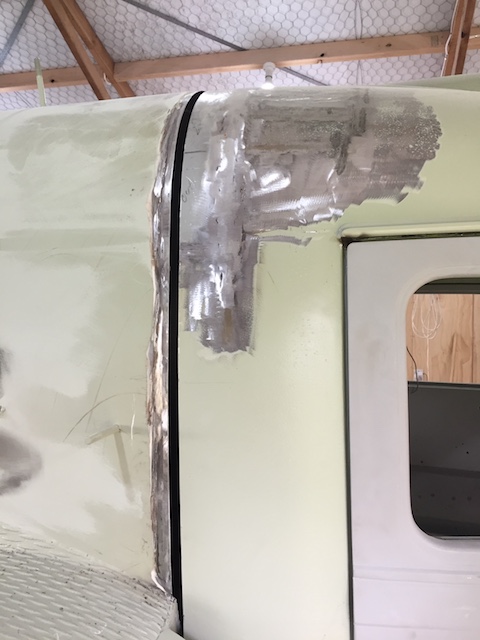 We are very appreciative for Simon and Craig carrying out more rectifications to the cab and tank…..just when they thought they had seen the last of the Texaco tanker project!!

For months now, Rowan Glass and Nick Saunderson have systematically block sanded layer after layer of the tanker body using a finer grit each time.

The most recent sanding was done with a 240 grit paper as Rowan and Nick prepared to apply the final coat of PPG Epotec primer.

Rowan discussed the paint options at length with PPG and recommended to Steve that we use the PPG Delfleet range. This is a complete paint system that has been specially formulated by PPG for the commercial transport sector.

Since the body prep work began, the Technical Manager at Car Colors of North Shore Ltd, Barry Wadham, has helped Steve in any way he can. Once the shade of red was confirmed, Barry had some PPG Delfleet CT coloured primer made up and delivered for Rowan to apply. 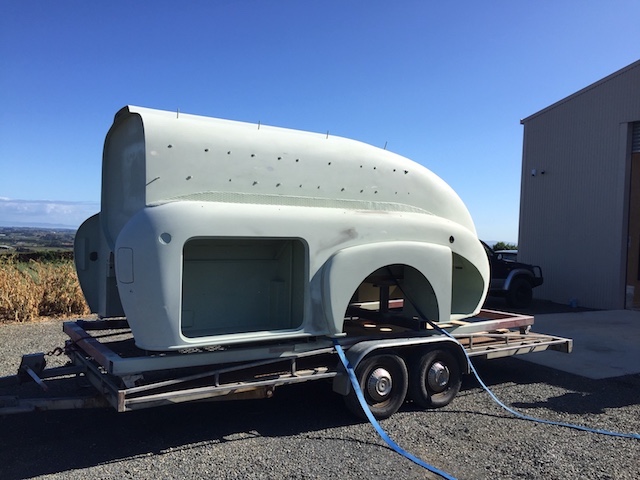 Steve collected the tank finished in PPG Epotec primer from Rowan’s shop and delivered it to Jay at JJ’s Painters Ltd in Pukekohe. 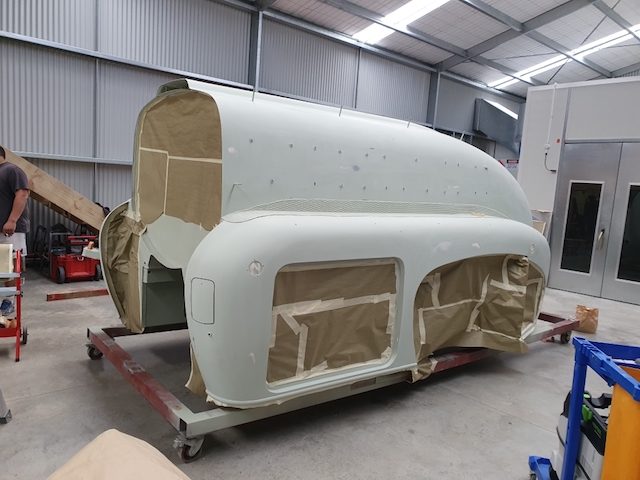 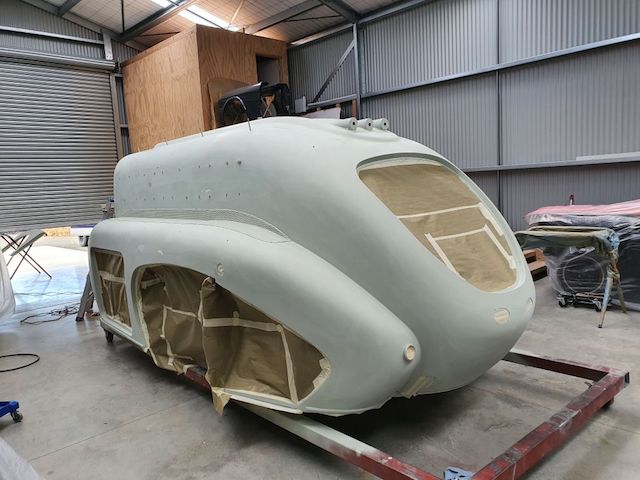 The tank was masked and the booth prepared for the spraying of the PPG Delfleet primer. 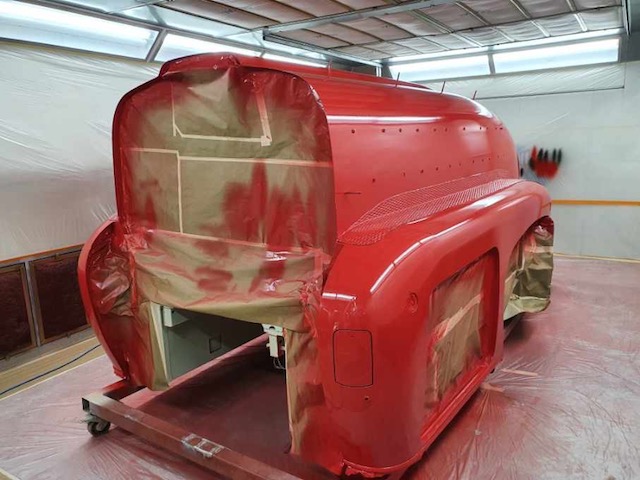 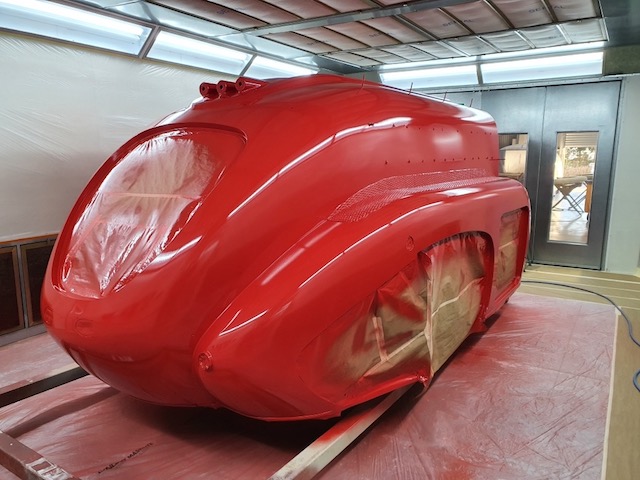 The sheer size of the tank required two painters to work together. Rowan and Jay both got on the end of a gun and began spraying each side with the red tinted PPG Delfleet CT primer.

Throughout this phase of the body work, Rowan has taken advice from the PPG technical rep. The hardener and thinner used with the coloured primer were also from the PPG Delfleet paint system. 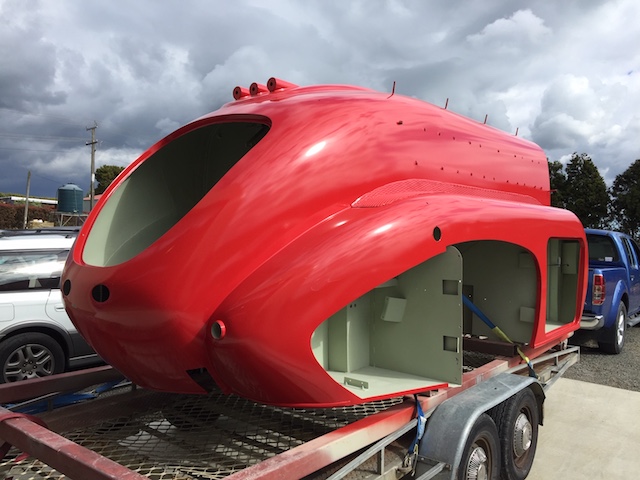 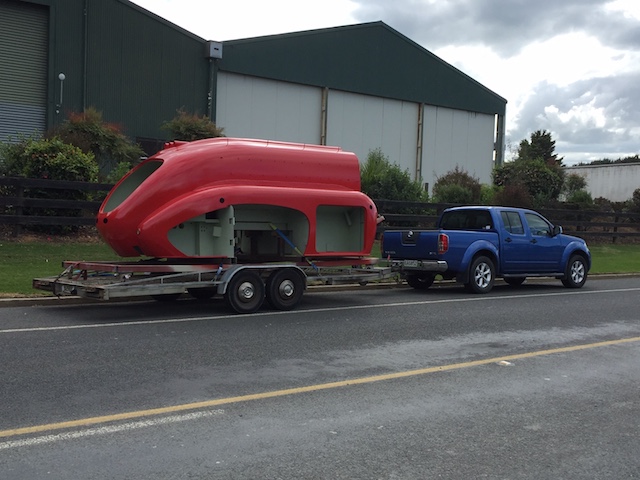 Seeing the red primed tank for the first time was a very exciting moment for us all. It signifies a real milestone of getting the tanker to this stage. 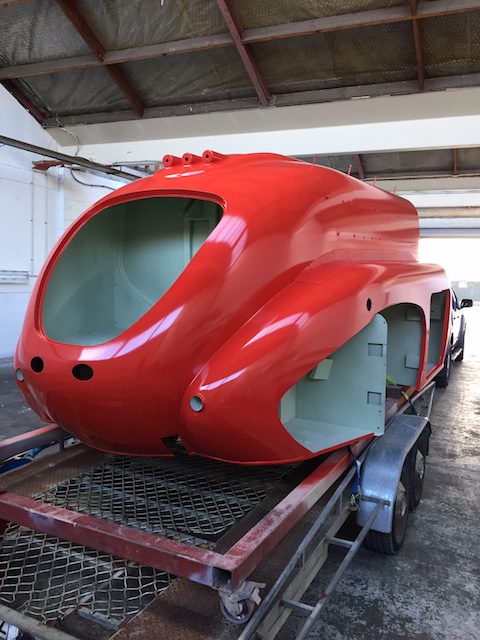 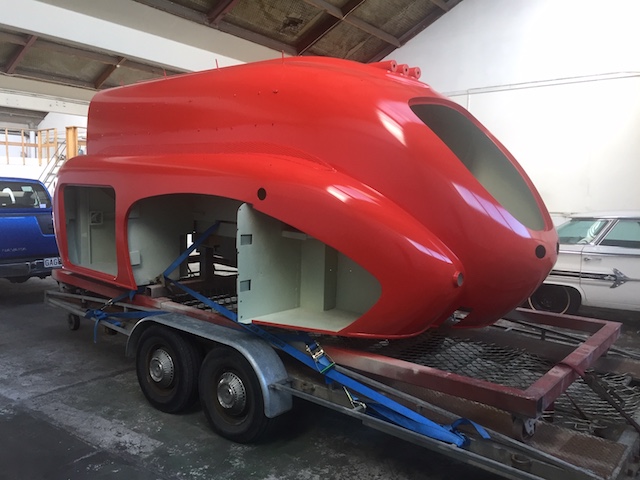 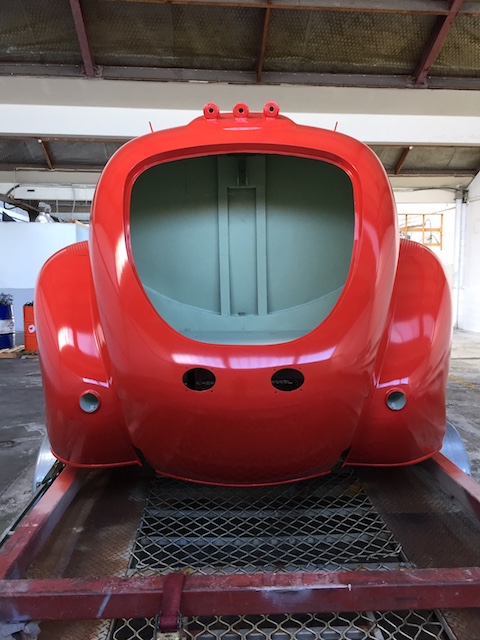 The outstanding preparation work that Rowan and Nick have worked so hard to achieve is beautifully showcased in these photos. And it would be so easy to overlook the fact that this is still only a primer coat. The PPG product, along with Rowan and Nick’s talented workmanship, has the tanker looking absolutely stunning.

Our thanks and appreciation to Rowan and Nick, Barry at Car Colors North Shore Ltd and Jay at JJ’s Painters Ltd for getting us one step closer…..and what an exciting step it is!

A search has been underway since we purchased the Texaco tanker to identify the style of the rail pedestals which were all missing.

Rich Harner produced an invaluable photo last year of a 1938 Diamond T Texaco Tanker that showed the pedestals used by Heil during that year.

Then earlier this year we learnt of the existence of another 1941 Heil tank that we were able to study closely thanks to the owner’s help. 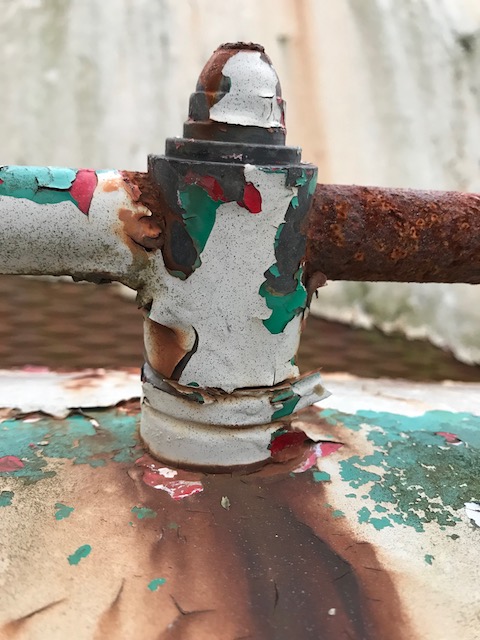 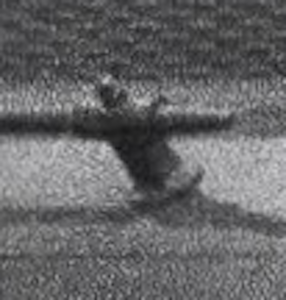 Using the 1938 photo, I came up with a sketch of what I believe Heil used to support the two rails. Due to having the dimensions and close up photos of the 1941 Heil pedestals, we also decided to incorporate the ornate detail that was machined at the base of the later pedestals.

Mark Whiter at Marlin Tooling took my sketch and brought it to life by creating a prototype of the pedestal. 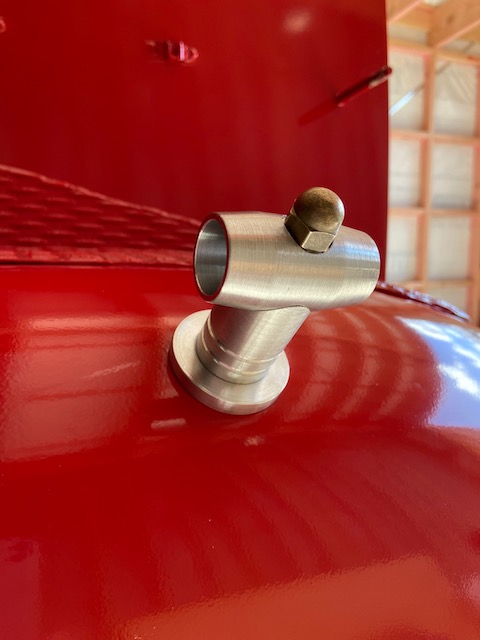 Mark has done a fabulous job of recreating the 1938 pedestals to as close as possible to the grainy black & white photo.

Ten of the circular bases will need to be slightly curved underneath to fit the contour of the tank guards. 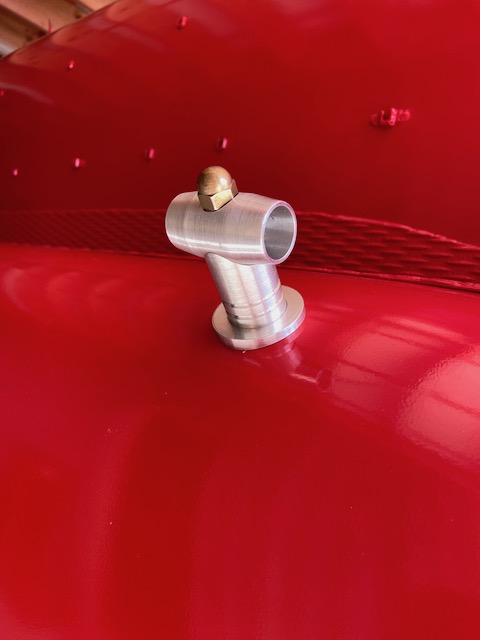 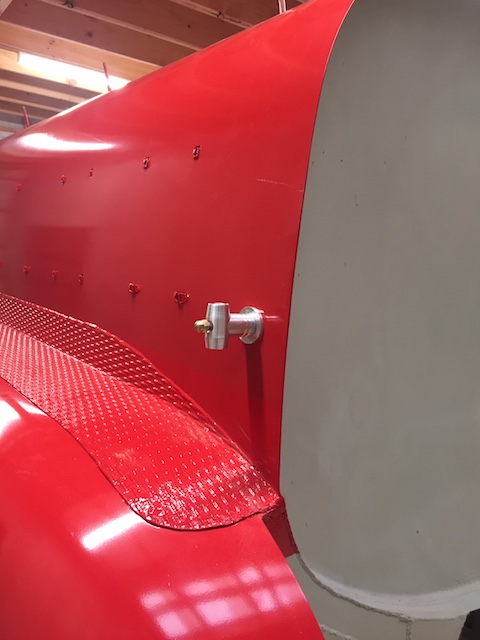 We have asked Mark to produce the entire set of pedestals which Steve will test fit while he has the tank in his care for a few weeks.

Steve’s next challenge is to get some tube bent up for the hand and foot rails. Once he is happy with the formation of the rails, he’ll drill precise holes in the rails where the threaded bolts are positioned.

He has further work to do on the tank lids, and is going to sand and prepare inside the lockers and under the tank itself.

We will always remember October 2020 as being the best month of a very challenging year. Not only did we get our first glimpse of the beautiful, red Texaco tanker, we also got to share the marriage of Mitch and Allanah with close friends and family. It doesn’t get better than that.