There is a long list of parts from the Diamond T truck and Heil tank that need to be either rebuilt or made from scratch. I have selected three for this post – two new creations and one rebuild.

Steve discovered at the start of the project that the windscreen / windshield frames were in an appalling state. 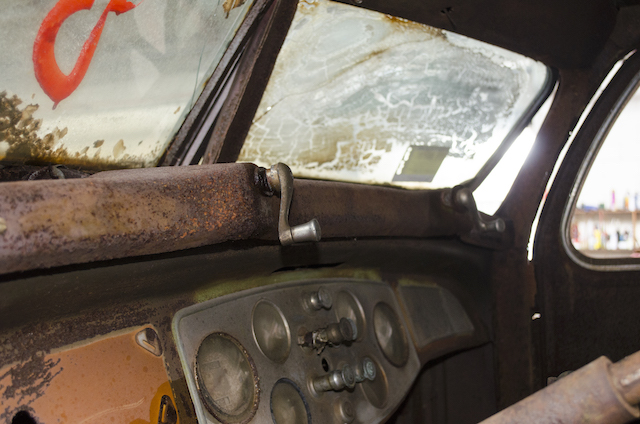 Both pieces of glass in the Diamond T cab windscreen are encased in steel frames. The stainless trim that forms the outside surround of the windscreen was originally sandwiched and pressed into the steel frames. 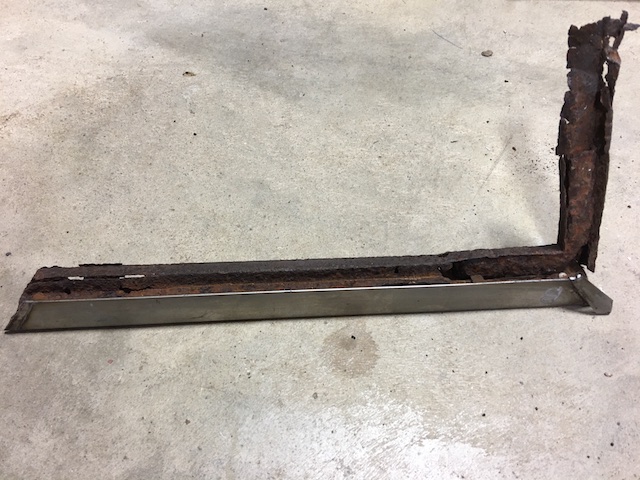 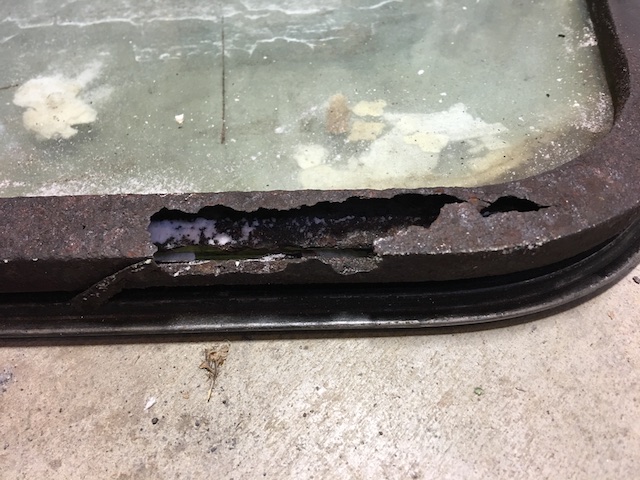 The frame itself had rusted away so much that repairs were not a viable option. Steve considered cutting off and preserving the stainless trim but found that the corroded steel backing had distorted the exterior surface of the stainless.

So the first task was to form some new frames. Steve knew that Bob Ballantyne, here in Auckland, used to make windscreen frames. So he approached Bob and was elated to find that Bob was up for the challenge.

Bob Ballantyne has been a friend of Steve’s family for almost 50 years. Although now retired, Bob still had one length of suitable extrusion left in his garage. We are so happy that this symbolic, last piece has made its way to our project!

The profile of the extrusion was too wide so Bob machined it down to the original Diamond T frame width. 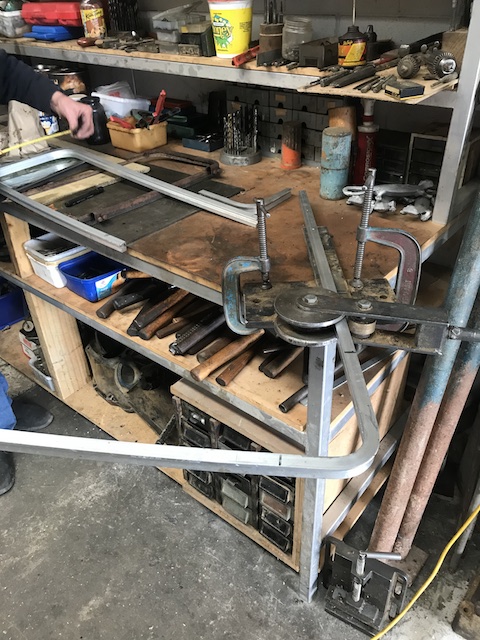 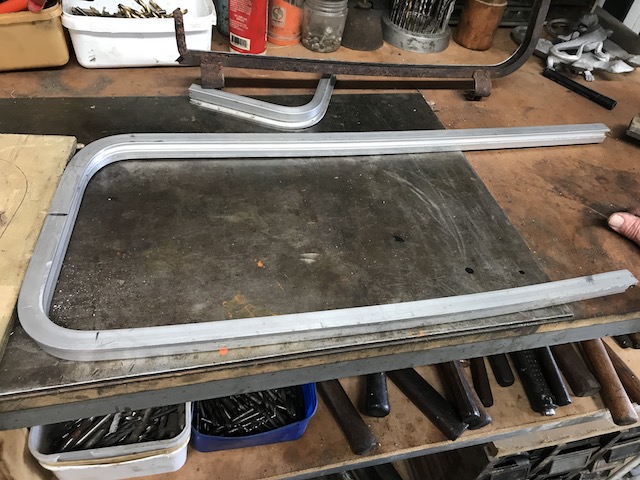 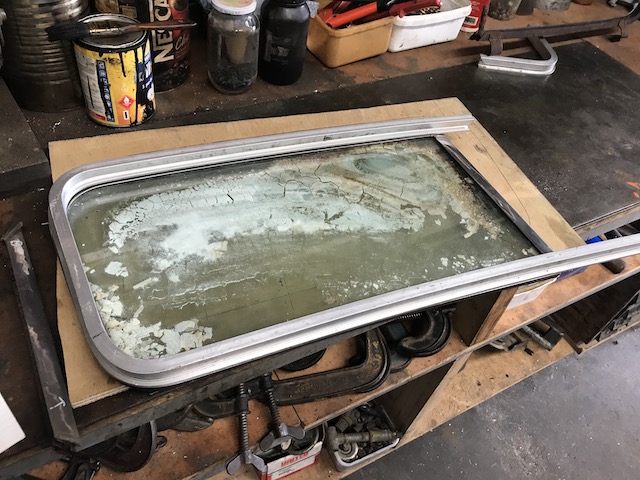 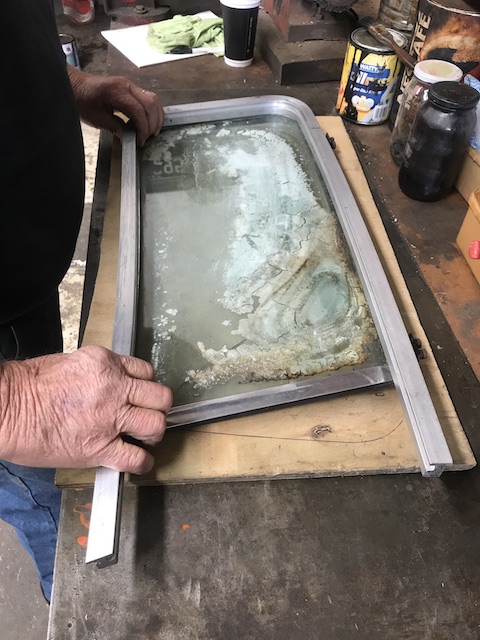 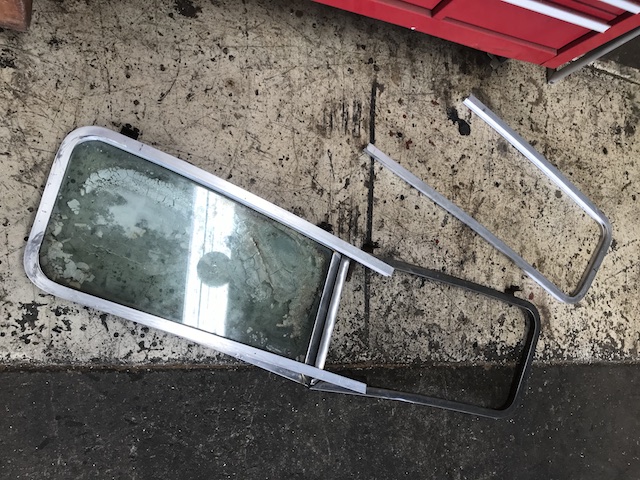 The slight curving along the horizontal length of the frame was hand formed by Bob and was achieved by using an adjustable block method. 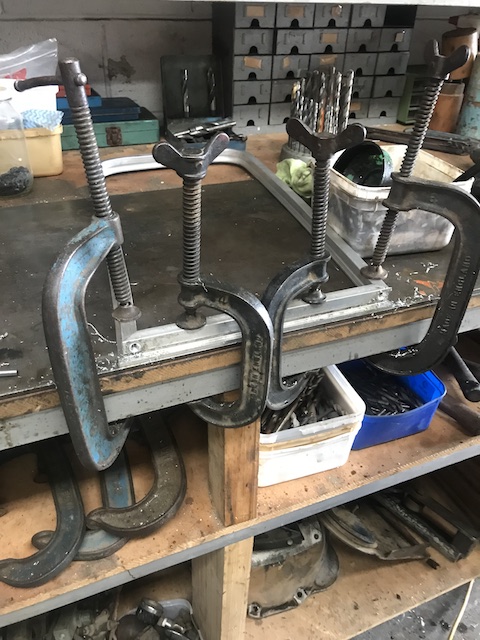 Bob mitred the corners of each frame before fitting the pieces in a jig. He then drilled and tapped each corner using countersunk machine screws.

Steve spent the day with Bob as these frames were made, watching the process and helping where possible. He really enjoyed witnessing Bob hand craft the extrusion and create these much needed frames. 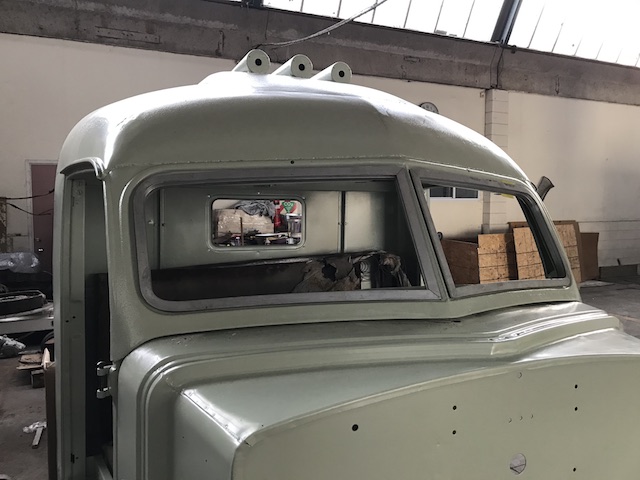 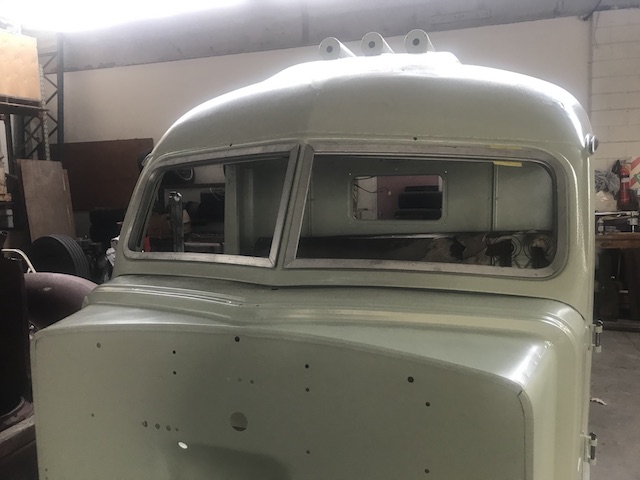 Back at the workshop, Steve test fitted Bob’s creations in the Diamond T cab. Total perfection!

The next part of the process will involve recreating the stainless trims.

We are very grateful and appreciative for Bob’s contribution to the restoration project. As well as being a friend, Bob has also been an avid collector of gas memorabilia over the years. So his personal interest and knowledge of the gas and oil industry, of Texaco, and of these petrol tankers make his help and involvement that little bit more special.

In addition to making the frames, Bob was aware of our interest and ongoing research into Texaco during the thirties. He generously gifted us a large amount of published Texaco material from that era which was specific to the New Zealand market. The history and brand information contained in this material is pure gold.

Thank you very much Bob.

Those who have followed the project since day one will recall the severe damage to the grille and lower valance / apron area of the 614 cab. 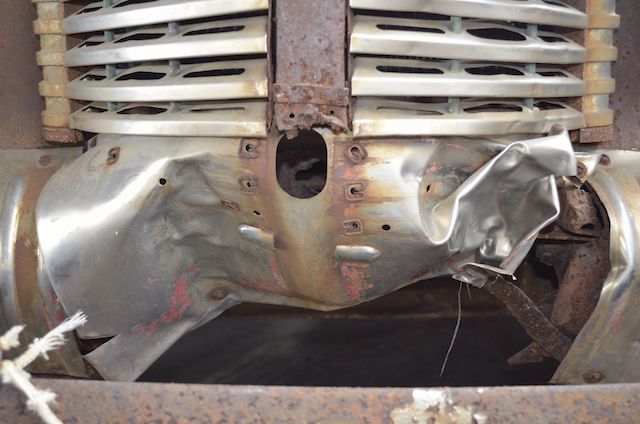 One item that was missing from the Diamond T cab was the crank hole cover. 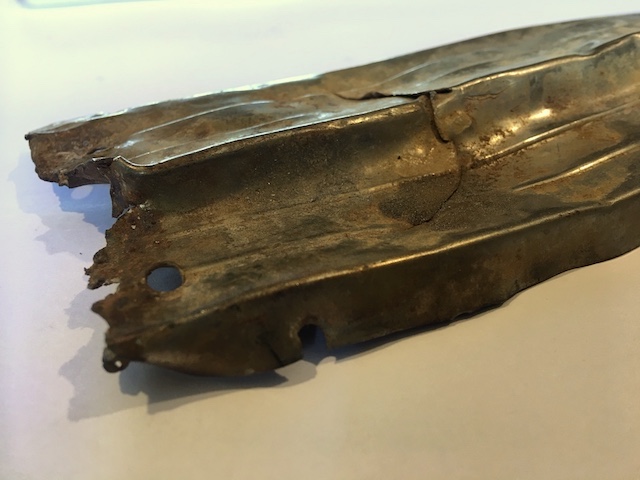 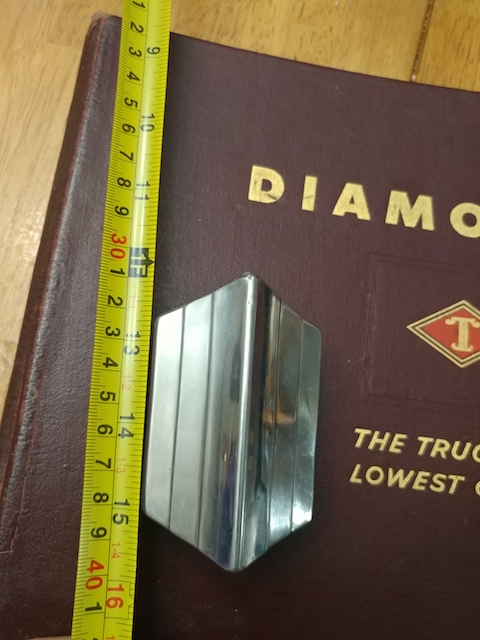 Steve Rutledge had kindly emailed us the correct measurements of the crank hole cover, which enabled Simon to make a wooden pattern of the ribbed profile. 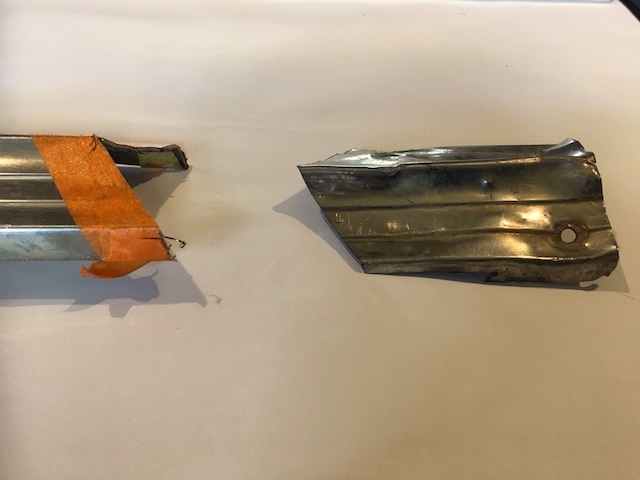 Simon managed to recover an area of the original strip that was not too badly damaged to use for the cover. The remaining pieces each side are shown above. 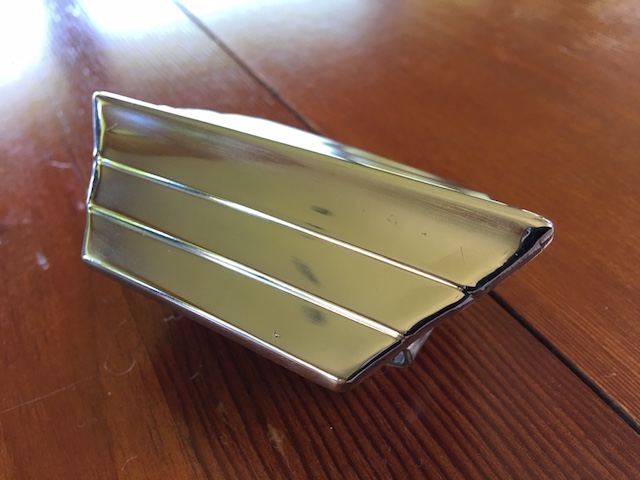 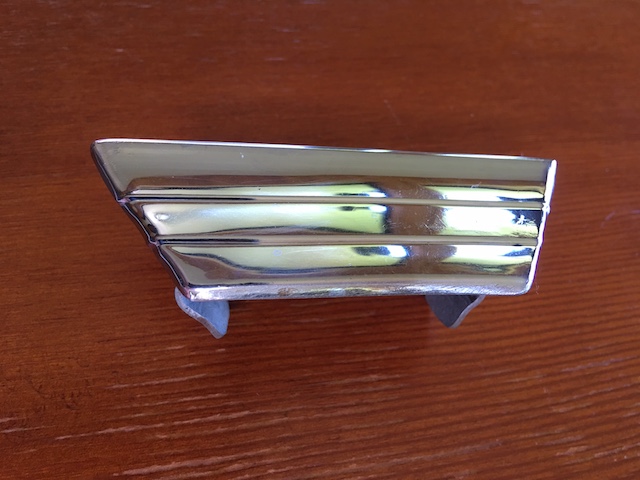 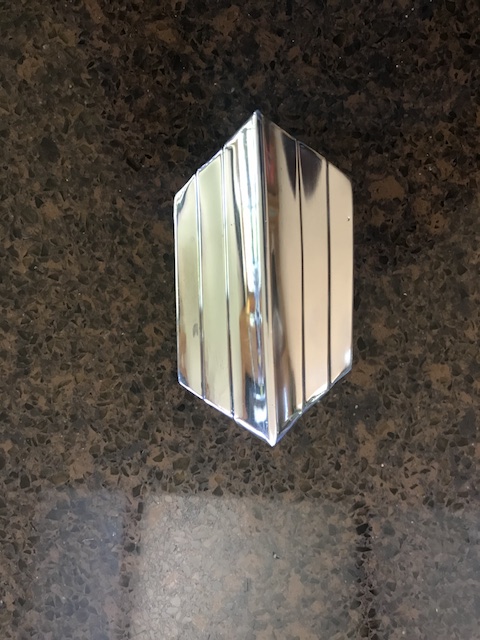 Simon trimmed the strip to the exact dimensions, allowing enough excess around the perimeter. He then cut and tapped the edges over the wooden former and welded where necessary.

Meanwhile, we managed to source a replacement strip that still needed repairing but was in a much better condition. 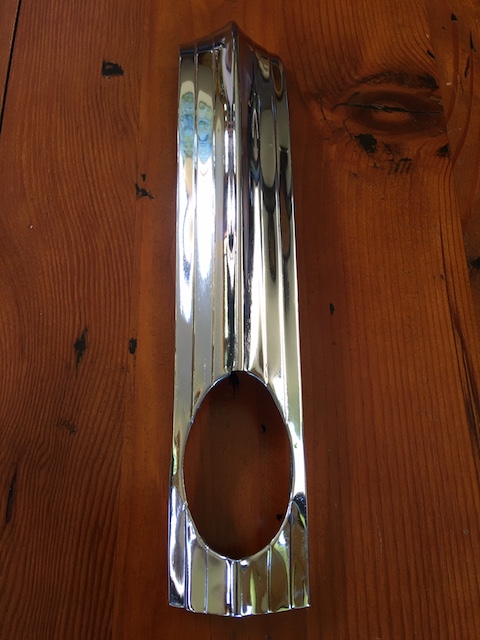 Repairs have now been made to the piece that sits in the centre of the valance / apron, and the stainless strip has been polished. 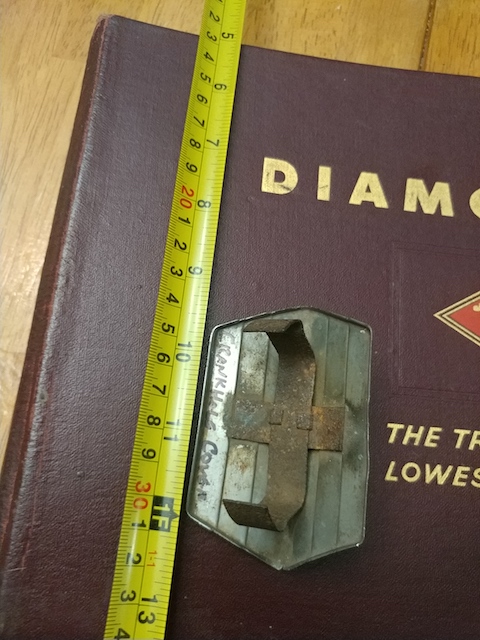 Steve Rutledge also photographed the clip system on the back of the crank hole cover. 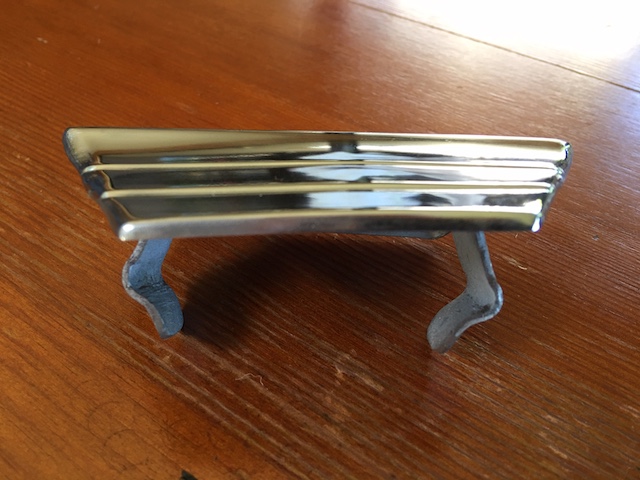 Using these photos, Steve has made up and soldered on the clips. 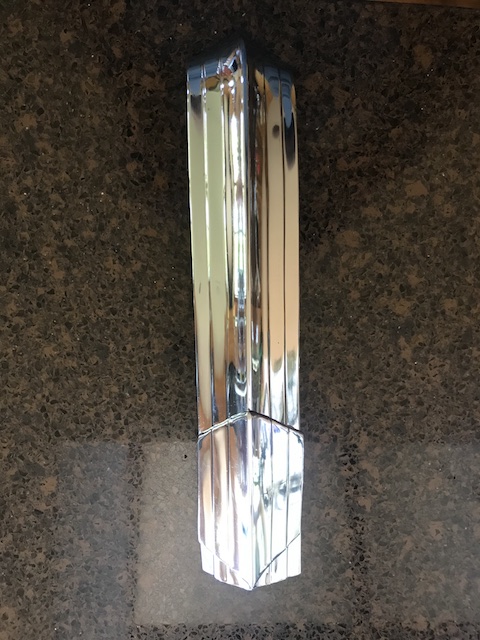 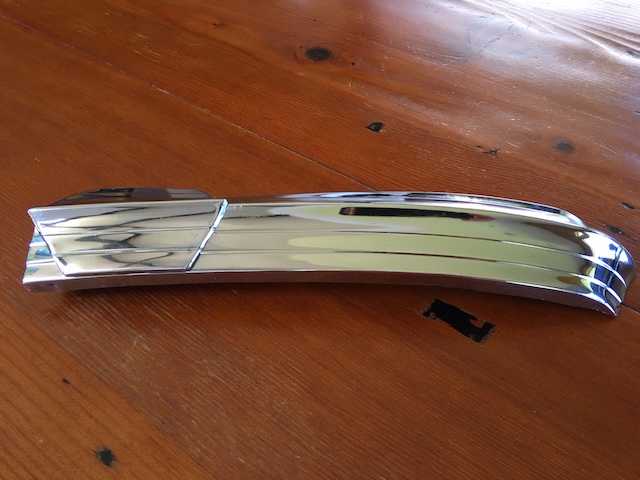 The crank hole cover in position. Another item to tick off the extremely long list!

Our thanks to Simon for making this. His work schedule, as always, is very full so we appreciate him taking time out to create the stainless crank hole cover.

We also very much appreciate Steve Rutledge’s help with the dimensions, etc.

Steve has been asked to deliver the latch mechanisms for the compartment doors and trunk lid so that the doors can be fitted and aligned prior to the final body work and paint preparation being carried out in those areas. 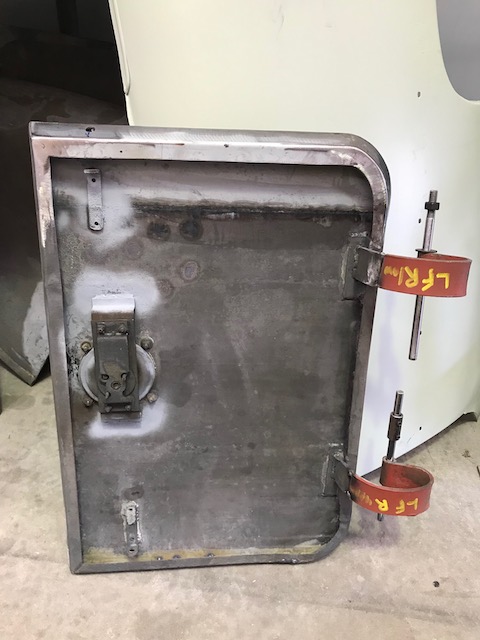 The interior system is a spring-loaded, over centre latching mechanism. All interior pins, springs and rods had rusted so a complete rebuild was necessary. 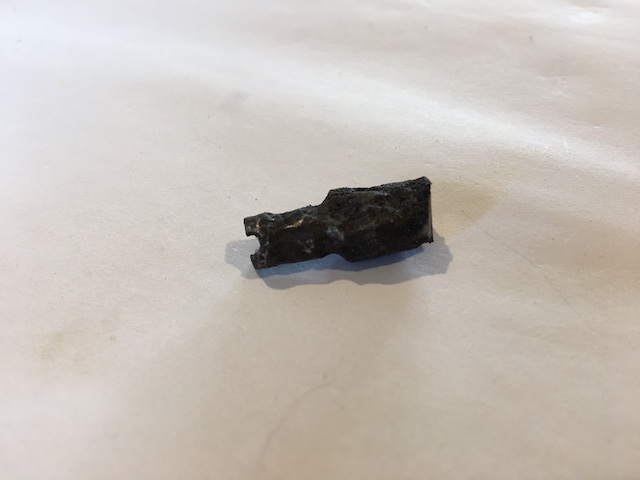 One of the rusted pins. 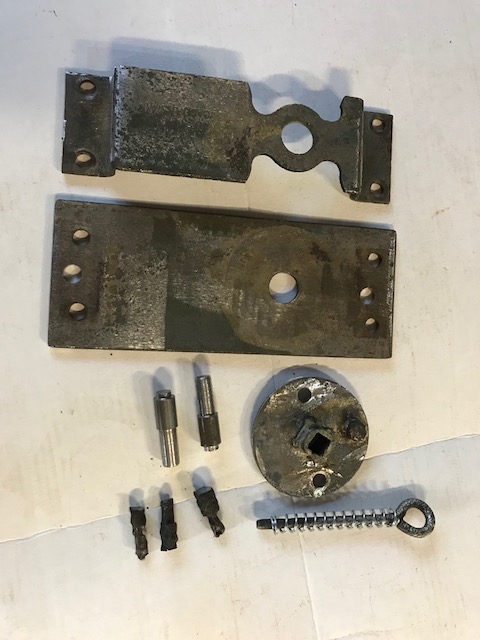 To separate the front and rear plates, Steve drilled out the spot welds. He cut and punched out the old pins and then welded and built up the spring lever pin.

Steve machined up new pins and welded them back into place. He used new compression springs and over stretched them to produce the correct tension.

He acid stripped all the components and applied grease to all the working areas, before reassembling each mechanism and welding them back together.

A front and rear view of two of the latch mechanisms. 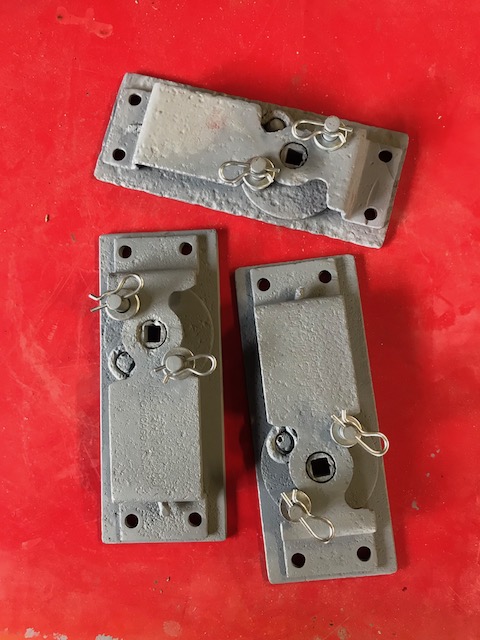 Steve has temporarily used R clips for ease of test assembling the rods that extend above and below the latches. 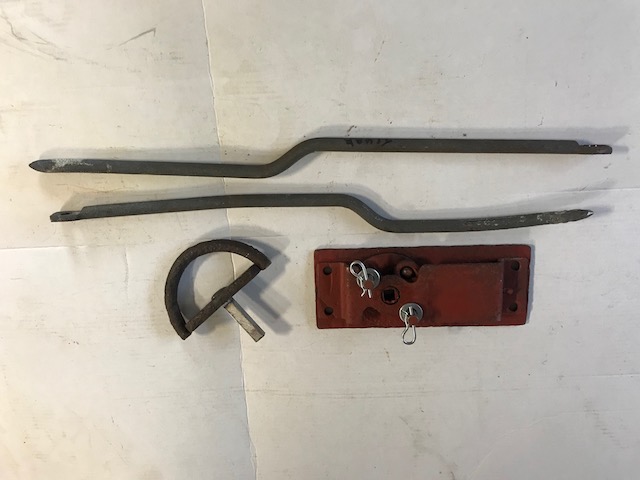 Pictured are the two rods, handle and latch assembly that used together form the complete closing mechanism of the trunk lid. 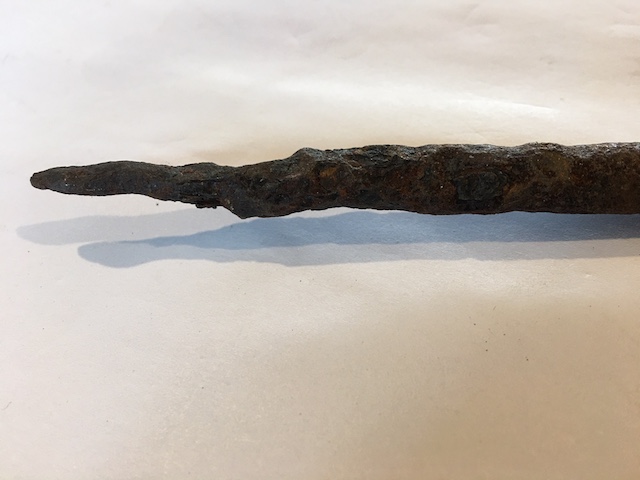 An example of the condition of the long rods that extend above and below the door latches. Steve is currently machining up replacement rods for each compartment door and the trunk lid.

Work has begun on the filling, blocking and sanding of the Heil tank. It is a time-consuming process given the size of the tank, the lead and the repairs that have taken place. I’m looking forward to sharing some photos and details of this in the near future.

Our thanks again to Bob and Simon for their valuable contribution to the project.