Steve has restored and refitted the run off pipes and the tank truck equipment. On top of the tank, he has reconditioned and reattached the lids and roof access doors.

One of the first topics covered on this site was the original tank truck equipment that was still housed in the tanker.

In 2018, I reached out to Emco Wheaton for help with identifying each piece. Keith Taylor came to our rescue and provided the industry terminology that we were seeking.

Keith also explained how each unit worked and made us aware of the 1938 patent of the multiple valve selector.

To Paint Or Not To Paint

Throughout this project, we have considered the best plan of action on those parts of the tanker that probably weren’t painted originally.

One example is some Heil literature from the late thirties promoting “full length chrome plated hand and toe rails” as an option on many of their streamlined tankers. After reading these specifications, we chose to leave the “chrome finish” on the polished stainless pedestals and rails and not paint them.

During the service years of these trucks, it stands to reason that the most cost-effective and time efficient process to tidy up the body work was to simply repaint everything.

Some cables and brass tank equipment pieces showed evidence of paint residue so it is our belief that this was a result of repaints carried out over the years.

We therefore decided to reinstate the brass equipment as best we could to get closer to how these pieces would have looked when first installed. As these castings were never machined or polished, the surface of the brass showed imperfections.

Steve had all the brass pieces vapour blasted to remove the oxidation and recover the natural colour of the brass material. 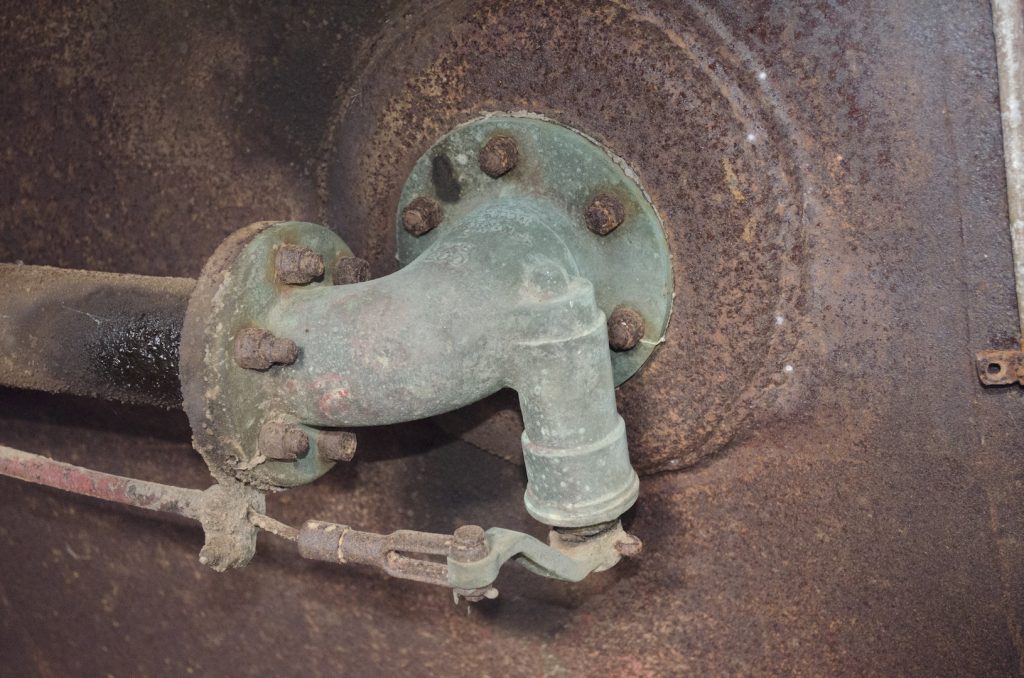 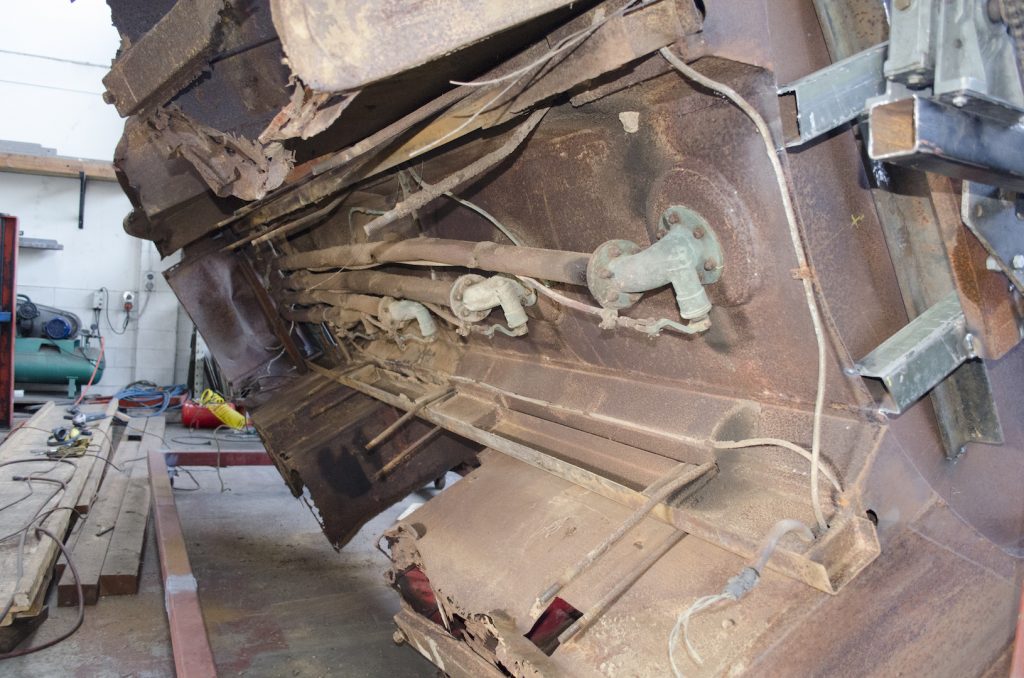 The original brass emergency valves were easily visible under the tank when Steve mounted the body on the rotisserie and turned it on its side. 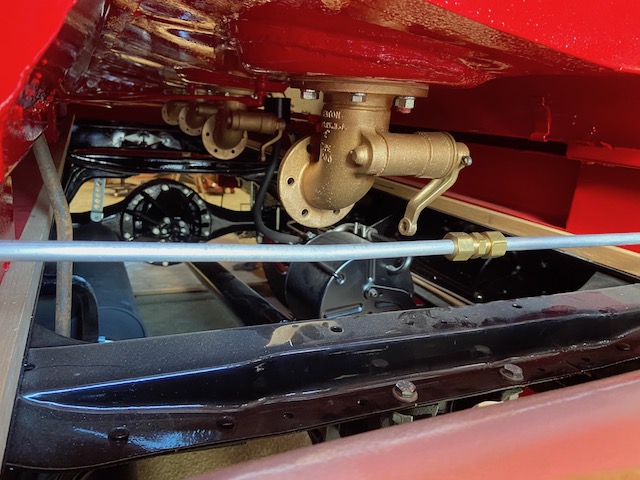 After the valves were vapour blasted, Steve protected them by applying two layers of clear coat. He then bolted the four emergency valves to the tank outlets in readiness for the reattachment of the run off pipes.

The Run Off Pipes 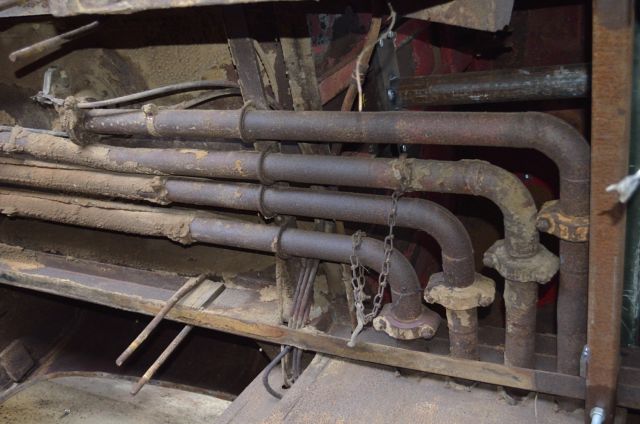 The four run off pipes carry the fuel from each emergency valve under the tanker to the multiple valve selector. Over eight decades, the surface of the pipes had corroded but were still in a repairable and sound condition. 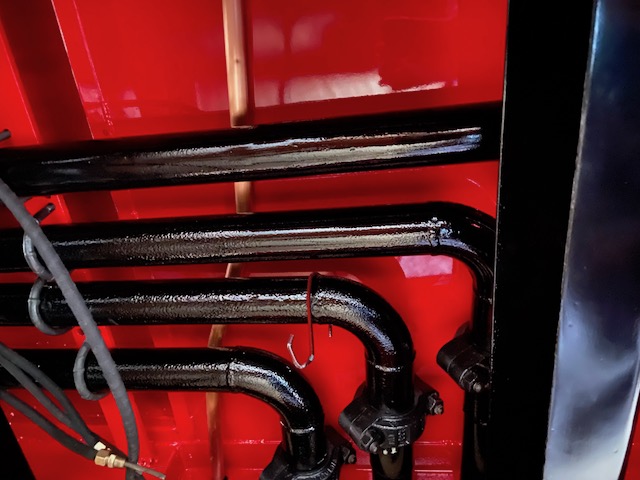 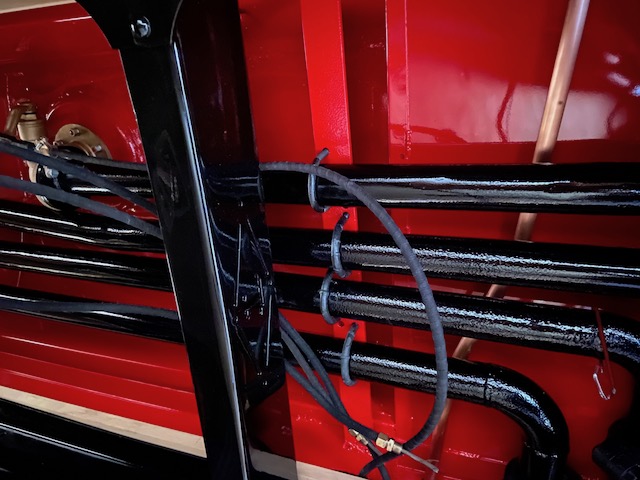 Steve stripped and cleaned up the run off pipes. After carrying out the necessary rust repairs and painting the pipes, he fitted each section to the relevant emergency valve. 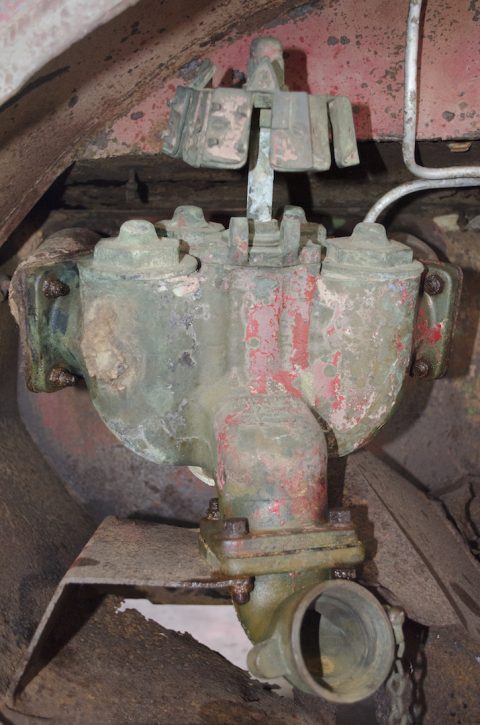 The function of this piece of equipment is to release the bulk fuel into the common discharge chamber via one selected tank / run off pipe. 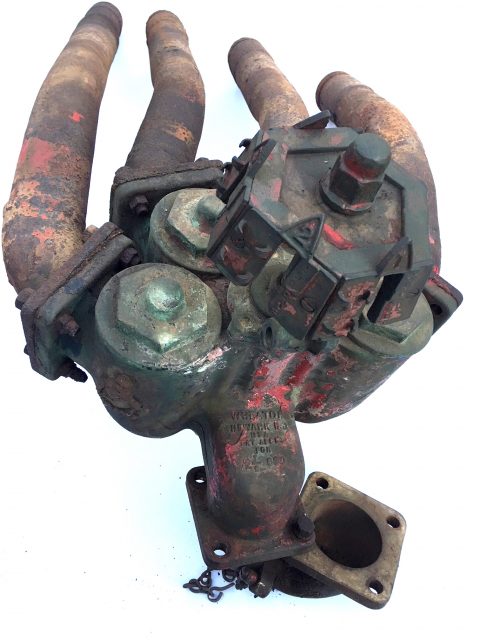 A folded steel plate supports the multiple valve selector so that it sits at the correct height to accommodate the four run off pipes that enter the rear compartment through the back wall. 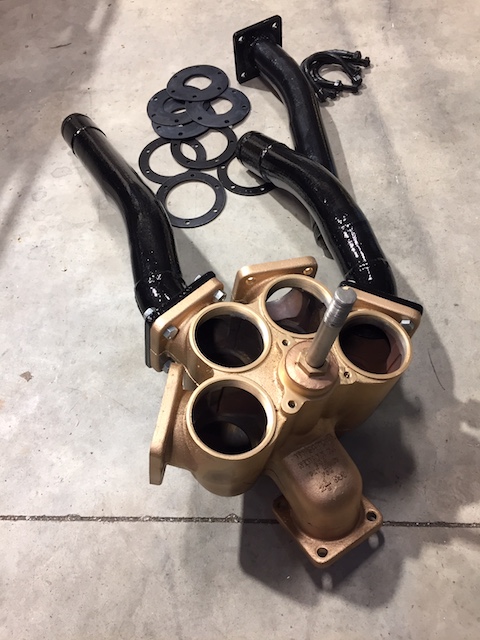 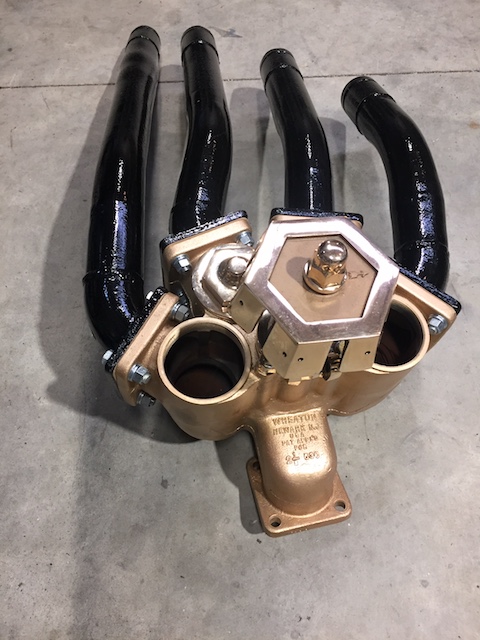 Steve bolted the short lengths of run off pipes to the rear of the restored multiple valve selector. These would be connected to the main pipe lengths once they were manoeuvred through the back wall of the rear compartment. 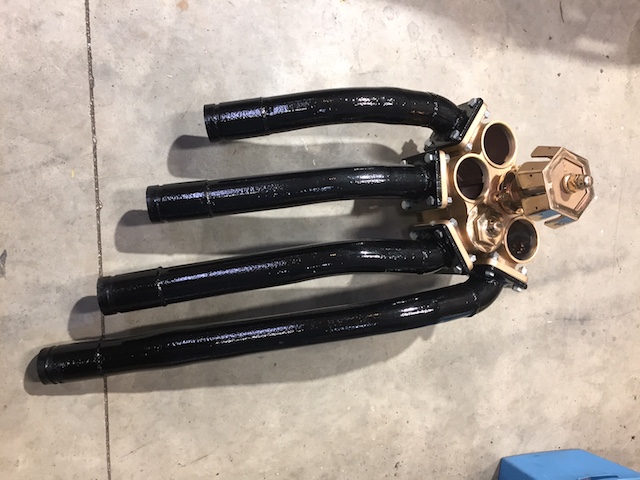 Another view showing the four pipes bolted to the multiple valve selector. 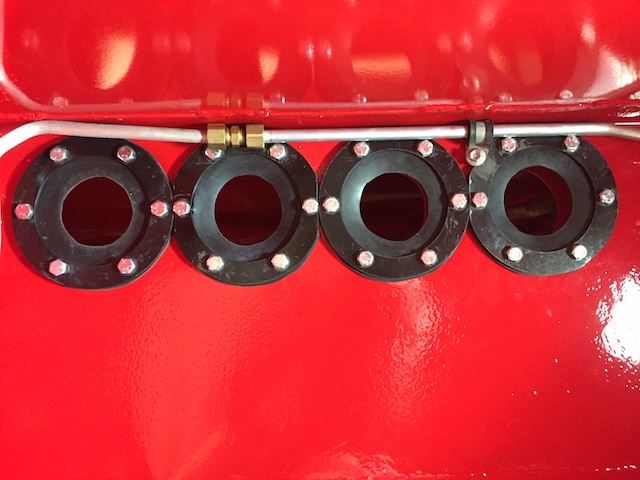 He temporarily sat the valve selector at the necessary height and the two of us eventually managed to get the four rigid pipes through the gaskets simultaneously. 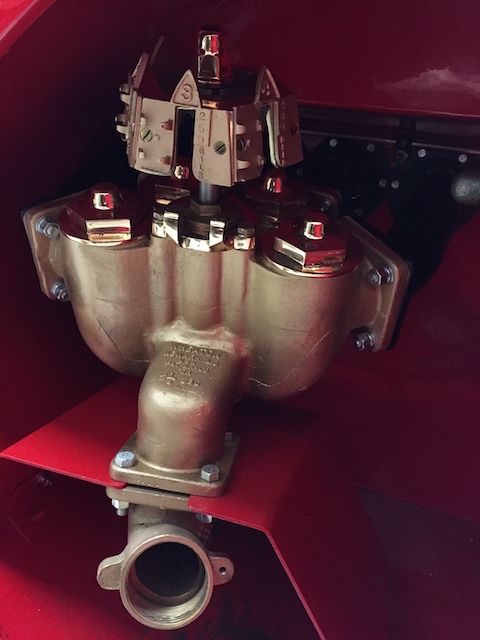 The restored multiple valve selector positioned on the folded steel plate in the rear compartment. 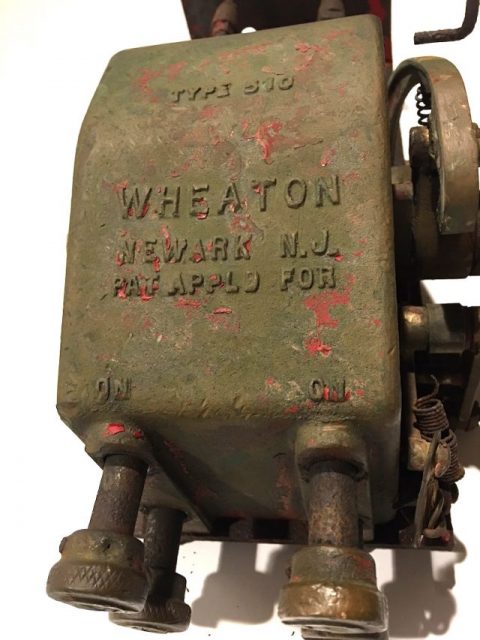 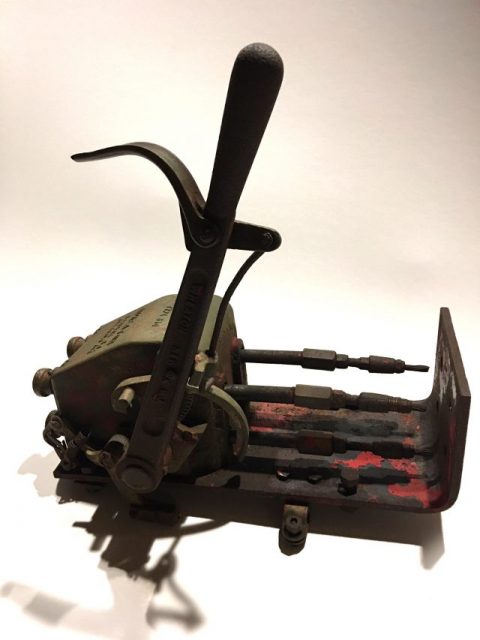 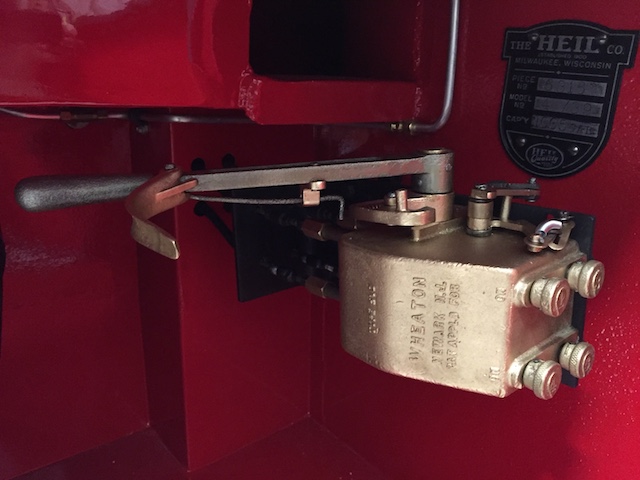 Steve has remounted the restored bottom operator on the right wall of the rear compartment. 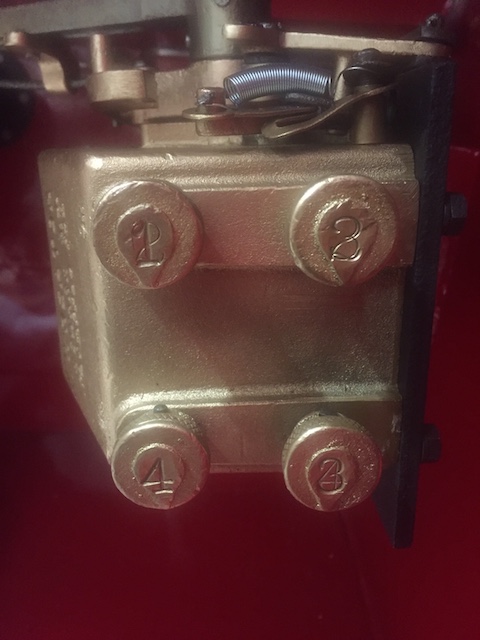 Interestingly, three of the brass knobs on the bottom operator had numbers re-stamped over the original digits. One possibility is that the connection of the cables to each emergency valve didn’t go as planned! 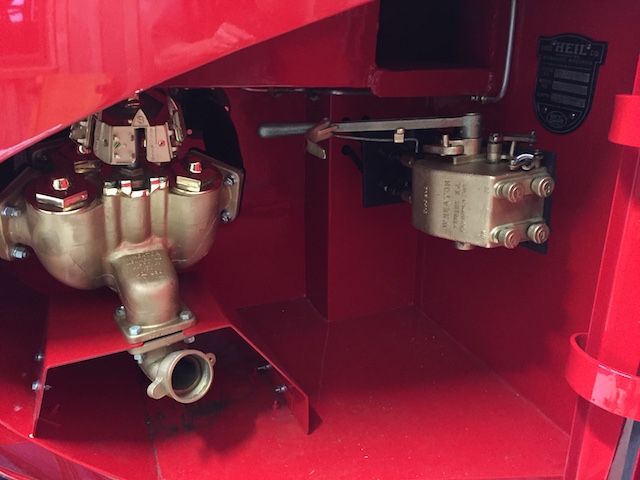 The “computer room” of the Heil tanker, albeit purely mechanical! 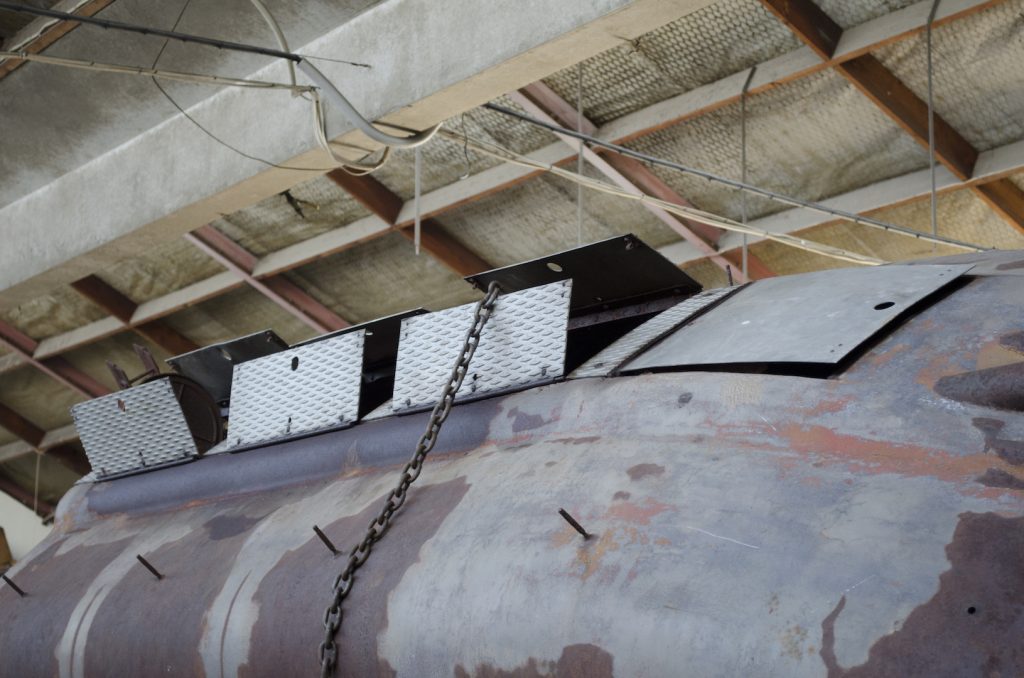 Across the top of the Heil tank are three pairs of access doors made of aluminium checker plate. These sets of doors sit along the flat edge of the tank roof and are held shut with double catches. In the area where the curving of the roof begins at the rear of the tank, a single flat aluminium door blends into the streamlined shape of the tank body. 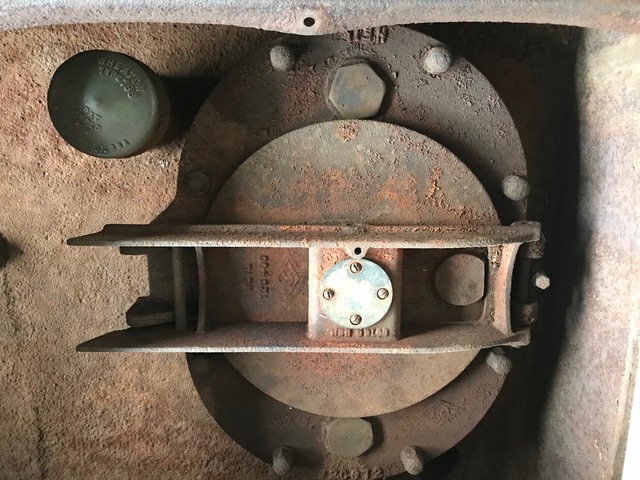 Under each set of access doors is the lid and venting device for each tank compartment. 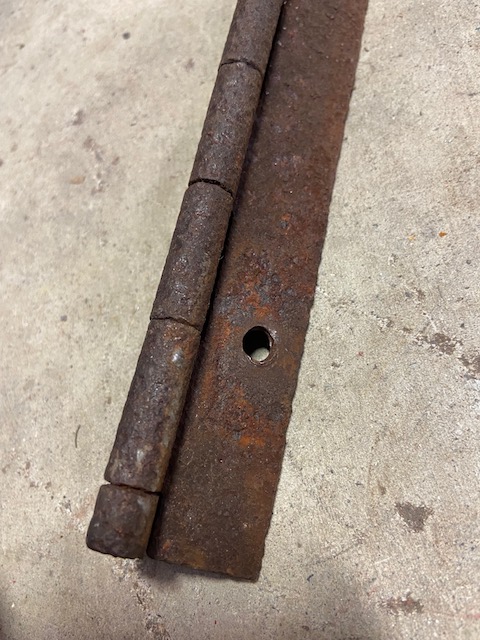 The original roof access hinges had rusted and seized up so Steve asked me to source some replacements. I eventually found hinges with exactly the same dimensions online at Co-Mac (PN) Limited in Palmerston North.

Steve stripped all the access doors and had them blasted. To preserve the restored surfaces, he clear coated all the doors.

Co-Mac supplied the hinges in 900mm lengths so as Steve worked along the roof area, he cut them to the required sizes for each set of doors. He then made up templates for each area to accurately drill holes through the new hinge lengths to align with the tanker bolt holes. 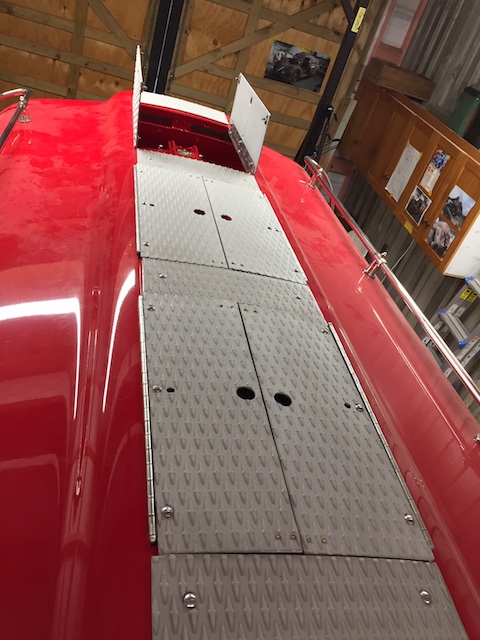 A view across the tank roof of the restored aluminium checker plate access doors and the spacing sections. 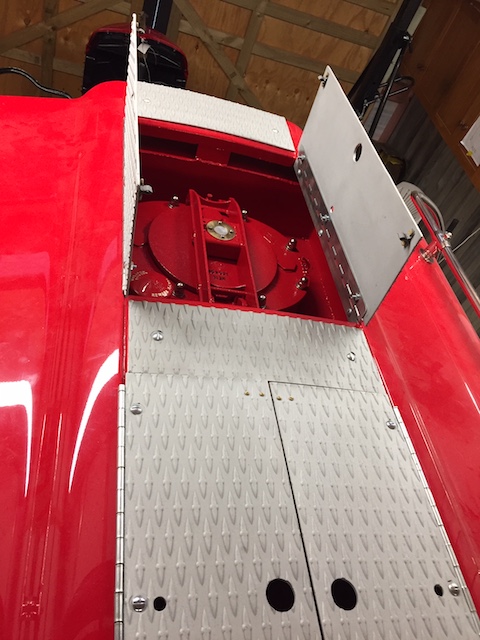 The restored tank lid is visible through the open access doors situated at the front of the tank.

It has been very satisfying for Steve to tick off the tank truck equipment from the list of remaining jobs.

Our thanks to Tom Andrews from the Classics Museum in Hamilton for helping with the vapour blasting of the brass components.

‘Lockdown progress’ in the shed continues…….

The conduit and tank wiring – Update # 37