Work is under way to recreate the Texaco tanker’s rear bumper. At the opposite end of the truck, the front bumper has been delivered to Otahuhu Chromeplaters Ltd to be rechromed.

The restoration of the radiator is now complete and we have received several small pieces back that have been rechromed.

Part of the visual appeal at the back of these streamlined tankers is the ornate rear bumper. It wraps around the curved tank area, and the deco styling is finished with three half round, chrome strips.

This image was taken by Steve a year ago this month when he visited the National Automotive and Truck Museum (NATMUS) in Auburn, Indiana. Never in his wildest dreams, did Steve think at the time that he would ever own a similar piece of automotive history.

In fact, if Steve had foreseen where 2018 would take us, he would have taken more photos! The tanker at NATMUS is similar to the ’38 but constructed with a Dodge Airflow truck. At the left of the image, part of another unrestored Dodge Airflow tank truck is visible. 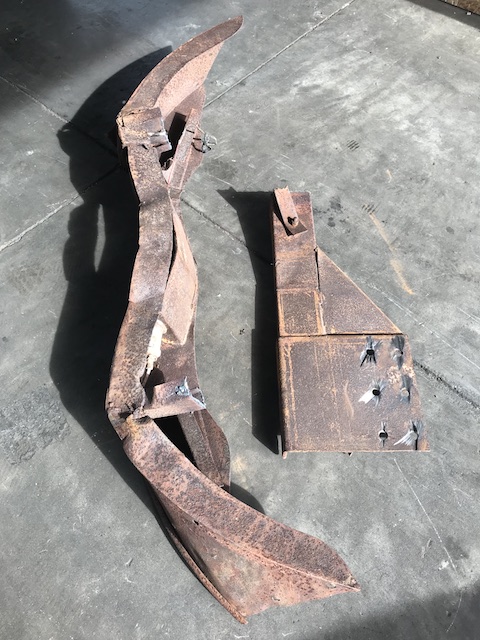 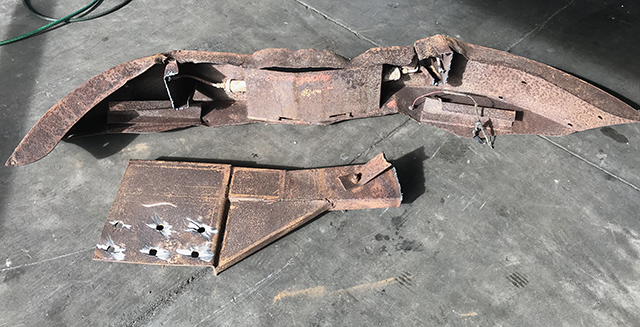 Coming back to the 1938 Diamond T tanker, the dismal condition of the rear bumper caused us to think long and hard about the best way forward.

After considering the severe damage and rust, we came to the decision that it was not a viable repair. (The same decision has since been made on the cab firewall / cowl, and this will be detailed further in the next post on the cab repairs.) 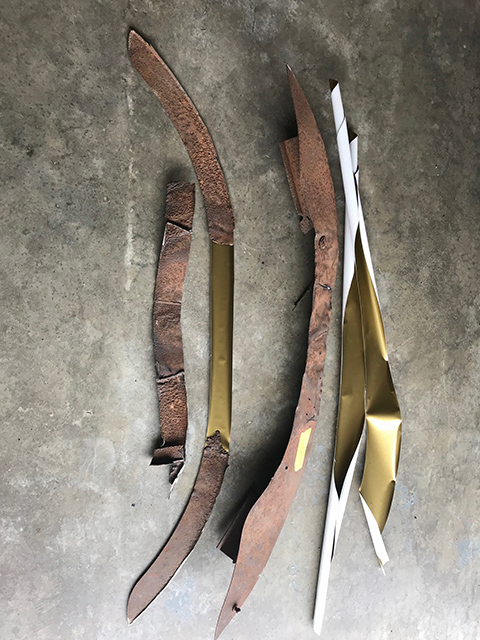 To use the original rear bumper to make patterns, Steve had to dismantle it first and straighten out the top and bottom plates. He then gave the templates to Mitch at Electric Creative Ltd to create a CAD file. 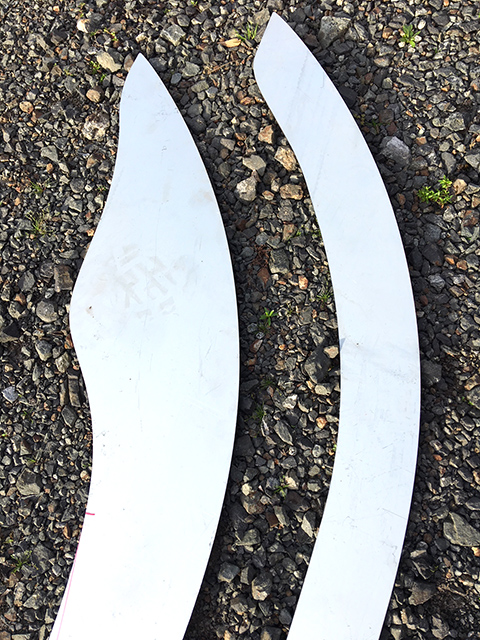 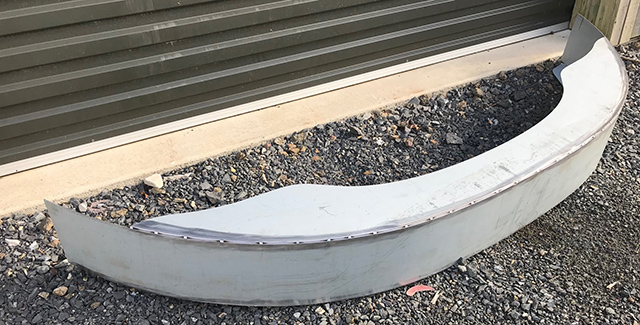 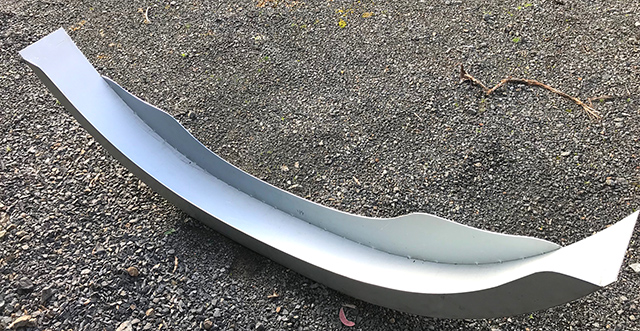 Manukau Sheetmetals Ltd in South Auckland initially tack welded the pieces together for a trial fit against the rear of the tank.

The bumper was returned to the Manukau Sheetmetals shop in Papatoetoe and work began on forming the recessed area that houses the license plate. 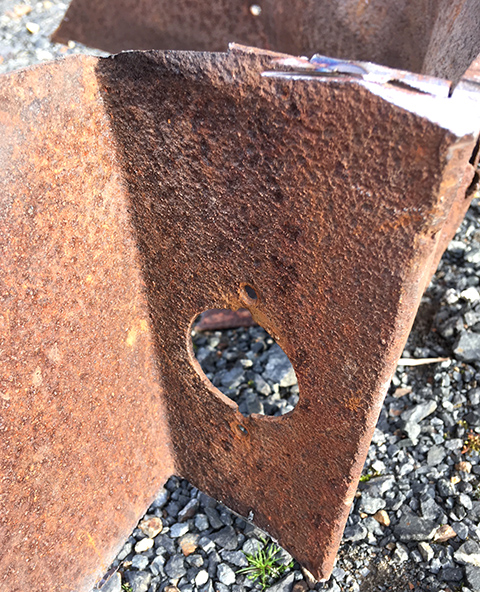 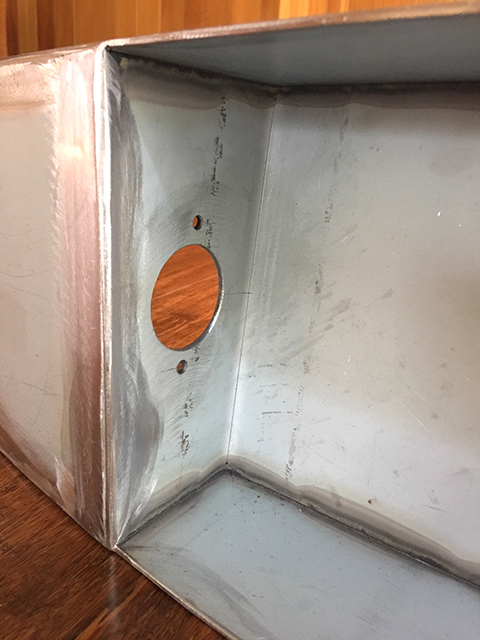 In recreating the original bumper to the exact specifications, the rear wall of the recessed area has been tilted back slightly as it was when first constructed. 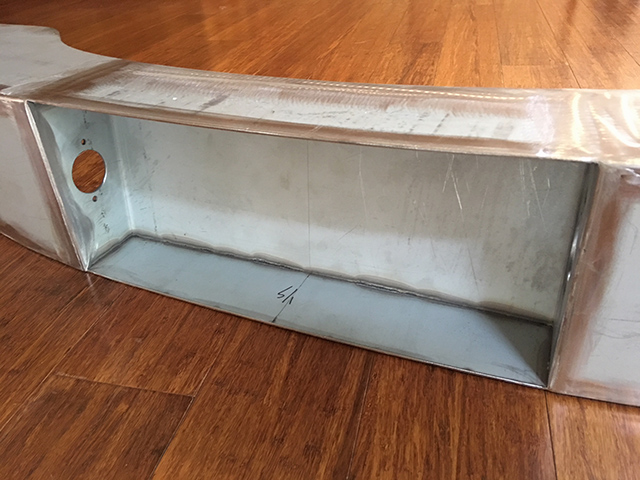 The holes on both sides of the central recessed area hold bulbs that illuminate the license plate. 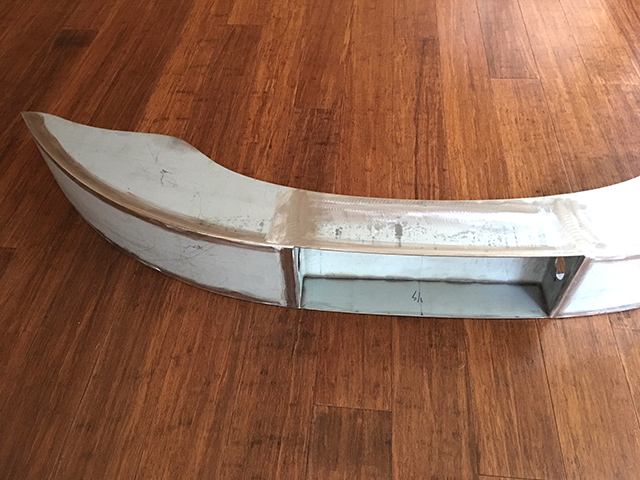 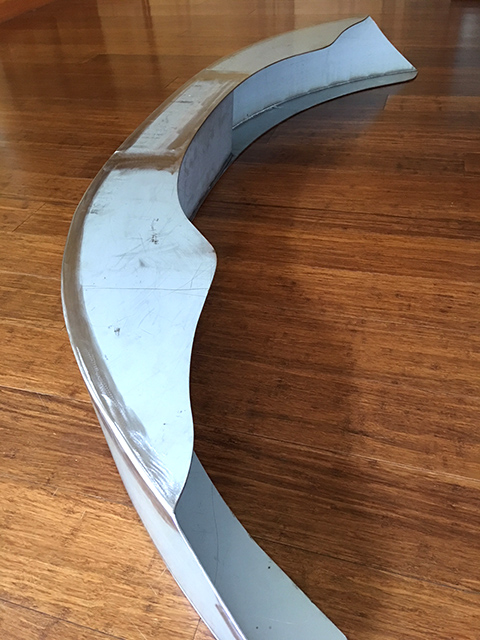 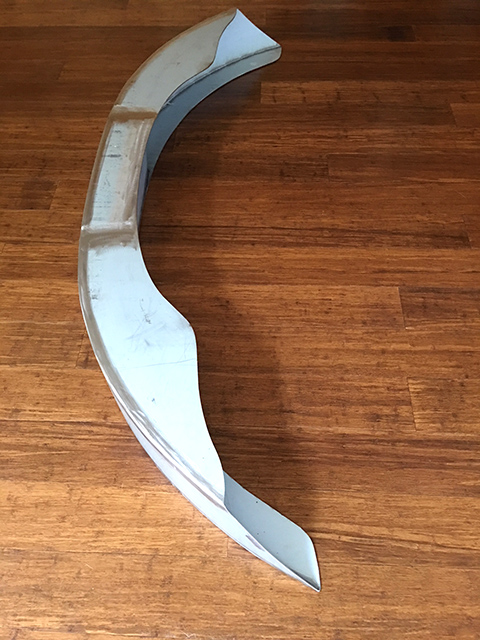 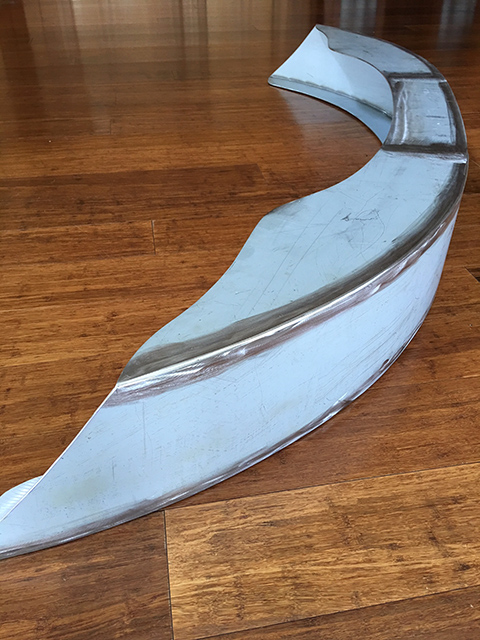 We are looking forward to the arrival of the half round steel bars so that they can be formed and then chromed.

Our thanks to Alan at Manukau Sheetmetals for the precision in his workmanship when replicating the art deco, eye-catching rear bumper.

Unlike the rear, the Diamond T front bumper is plain and relatively small for a commercial truck. 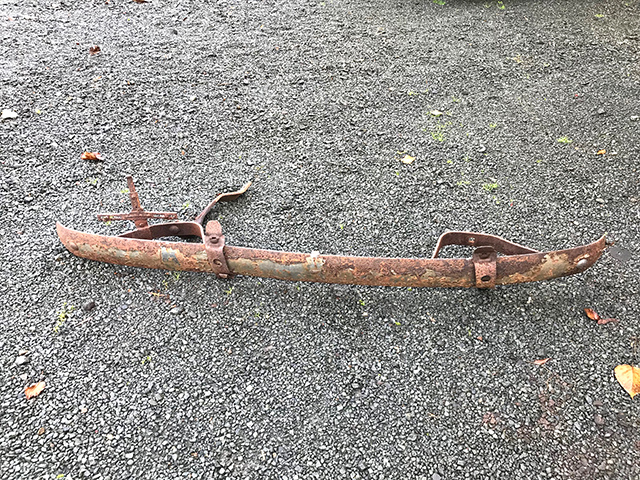 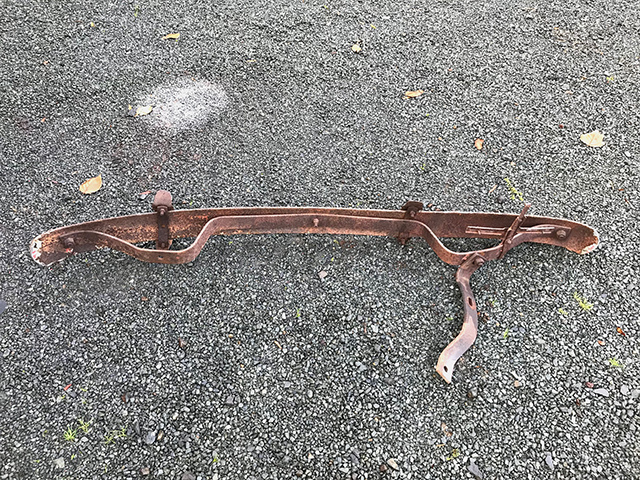 The Diamond T front bumper has been delivered to Otahuhu Chromeplaters Ltd for them to work their magic and transform it back to its original glory.

The initial work done on the radiator was first mentioned in Update # 10. Scott at South Auckland Radiators had dismantled it and ordered a core. Steve had started repairing the top tank and the other components of the shell had been repaired and primed.

The custom-made, finned core was manufactured within days and returned to Scott. 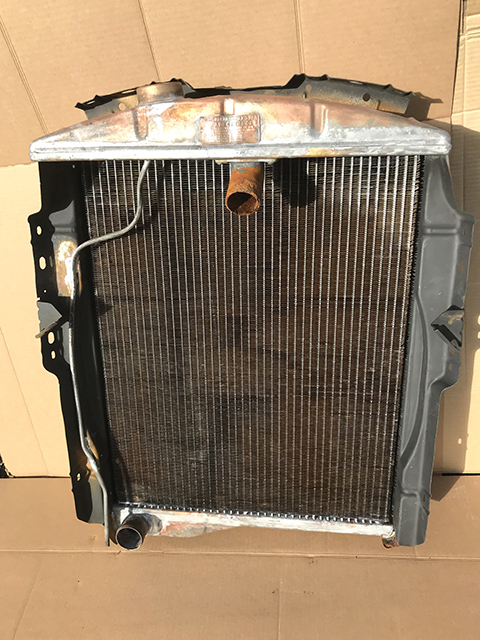 Scott then soldered the shell back together and reassembled the radiator.

One interesting point with regard to the radiator is that it operates under a zero pressure system. So Scott had to take care and only do a low pressure test when carrying out the post assembly checks. 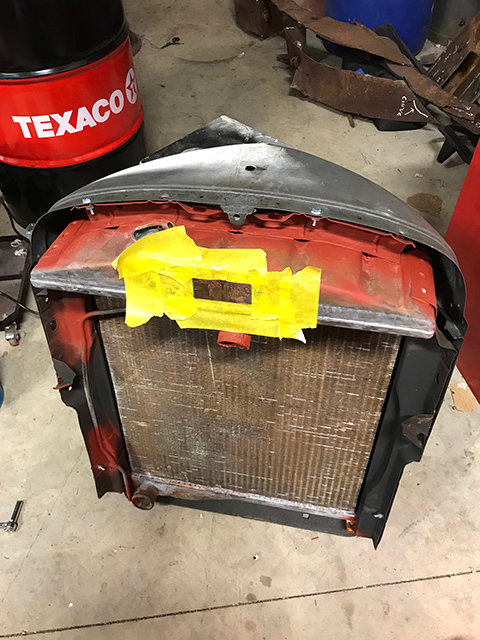 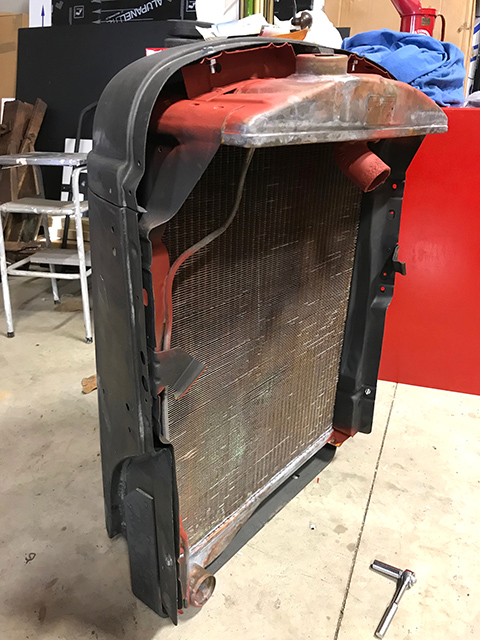 Steve test fitted the shell in the radiator support mounts and then completed the restoration by painting the entire radiator. 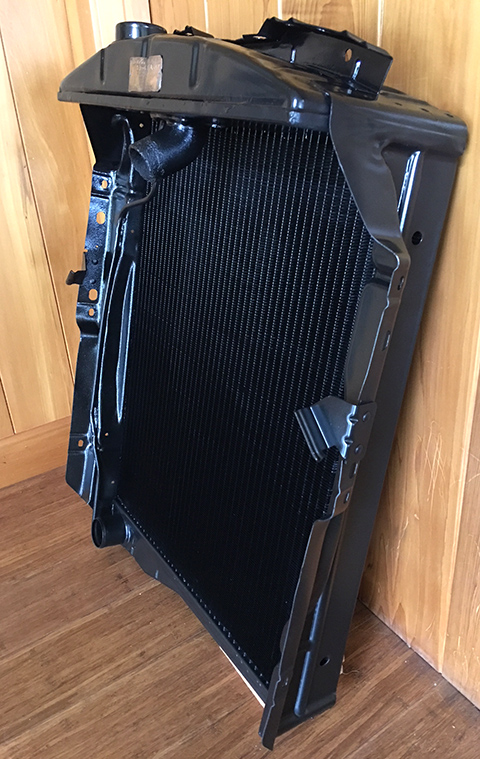 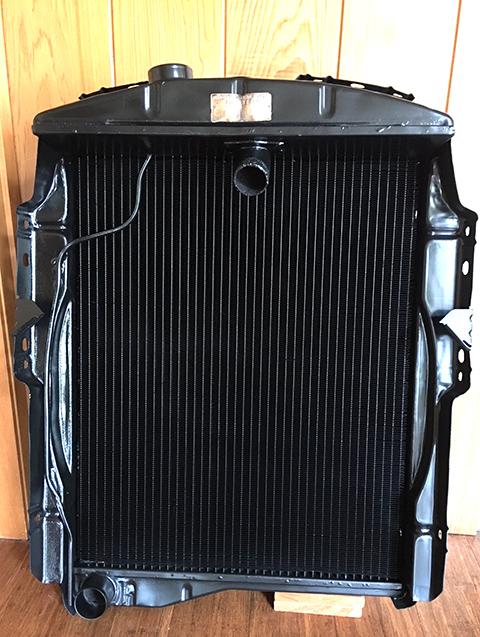 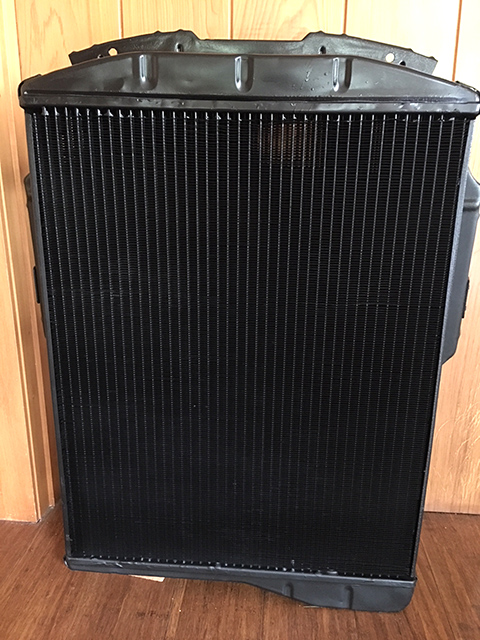 We really appreciate the speed in which Scott got the job done and are thrilled with the results.

One of the first pieces to be added to the “completed list”!

Two sets of handles have been rechromed – the windscreen winder handles and the hood / bonnet side handles.

The windscreen winder handles before being rechromed… 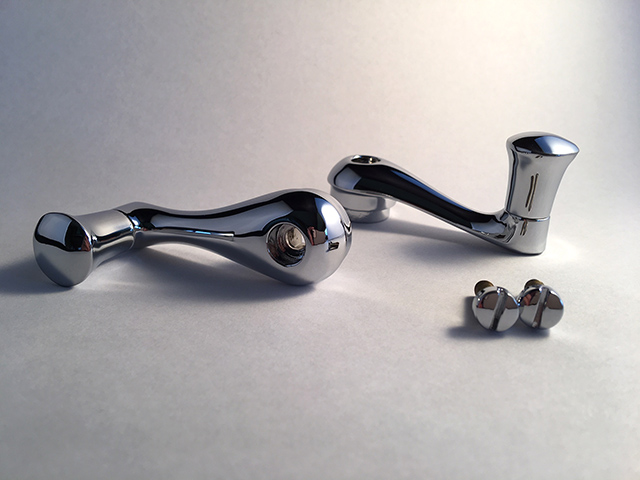 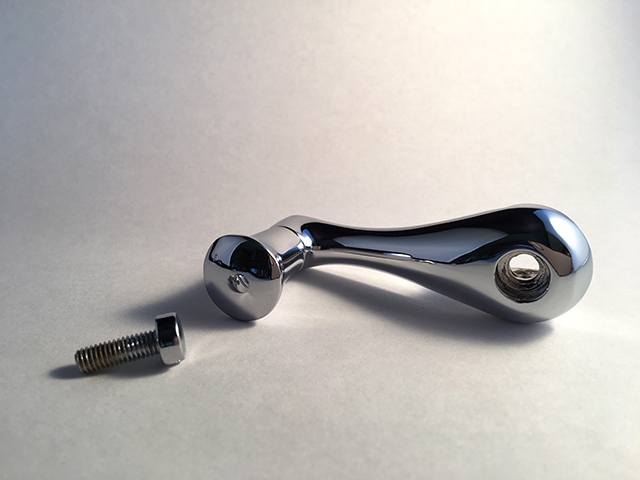 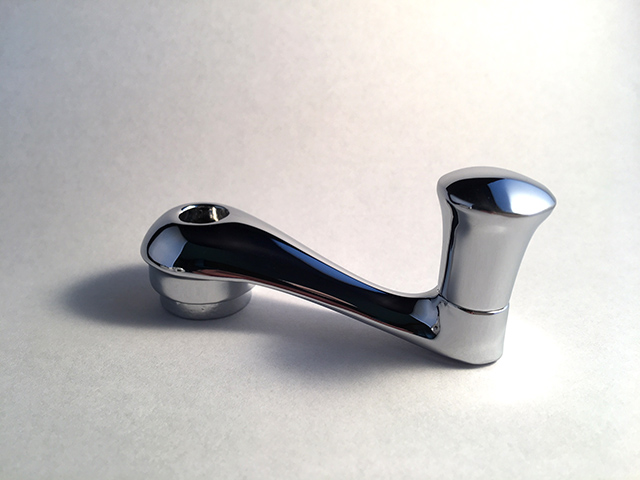 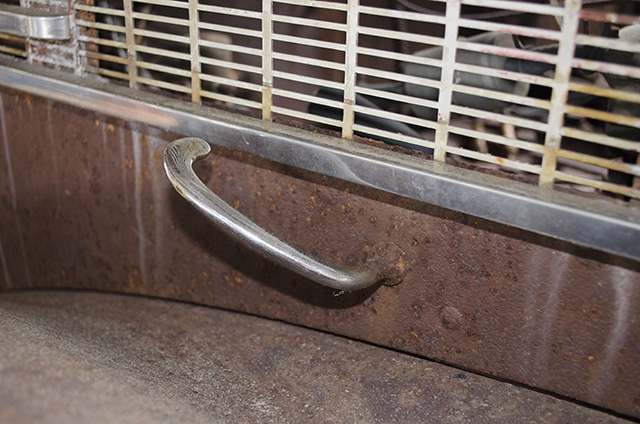 The hood / bonnet side handle prior to restoration… 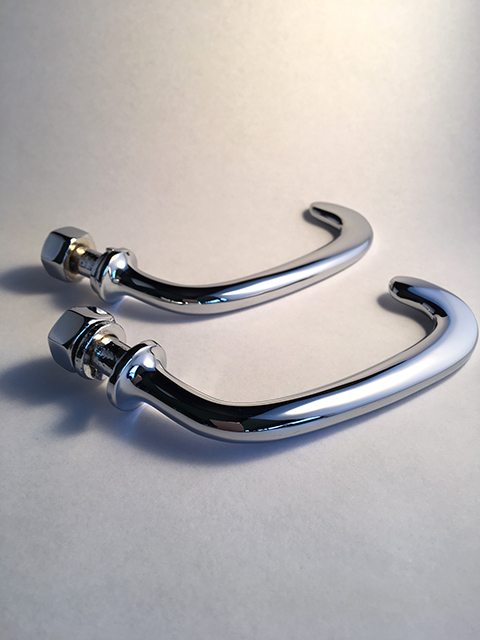 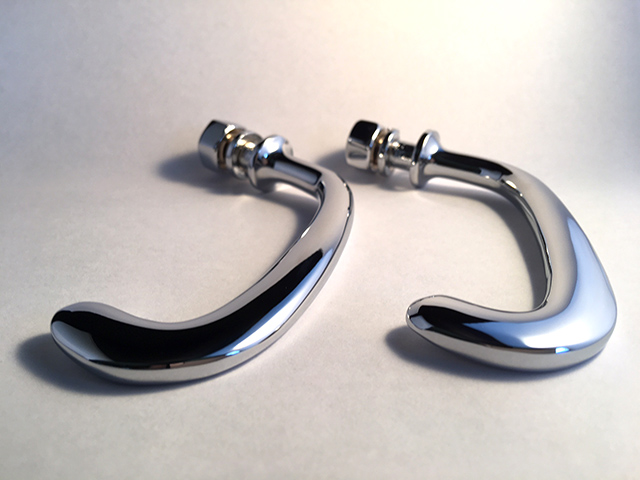 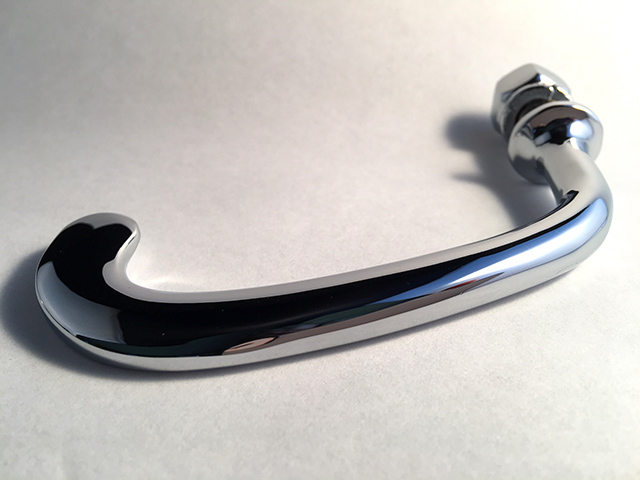 Both sets of handles have been beautifully finished and can now be put aside until the cab is painted.

Some more pieces to add to the very short “completed list”.

There is a lot going on with the restoration at the moment, and currently outsourced work is being carried out in several cities across the country.

With every component requiring repairs and/or restoration, we are living by Steve’s motto “if it needs doing, let’s do it now”.