Steve has started working on the Diamond T radiator and grille, and further progress has been made this week with the roof / back of the cab.

The radiator was manufactured by the Modine Manufacturing Company in Racine, Wisconsin. A large number of U.S. Patents was filed by Arthur B Modine / Modine Mfg Co over the years, and twelve of these patents are referenced on the ID plate. 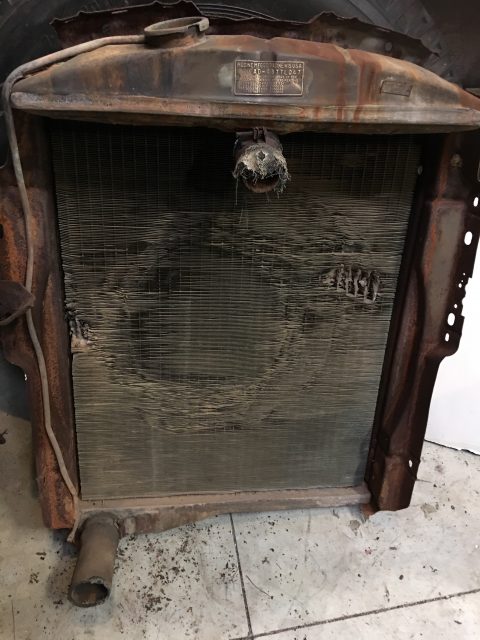 Steve delivered the radiator to Scott at South Auckland Radiators in Manukau to discuss and plan the repairs. With the visible and obvious damage to the core, there was certainly no need for a pressure test!

With the original core beyond repair, and to keep the radiator in its original style, South Auckland Radiators are getting a custom made, finned core manufactured. 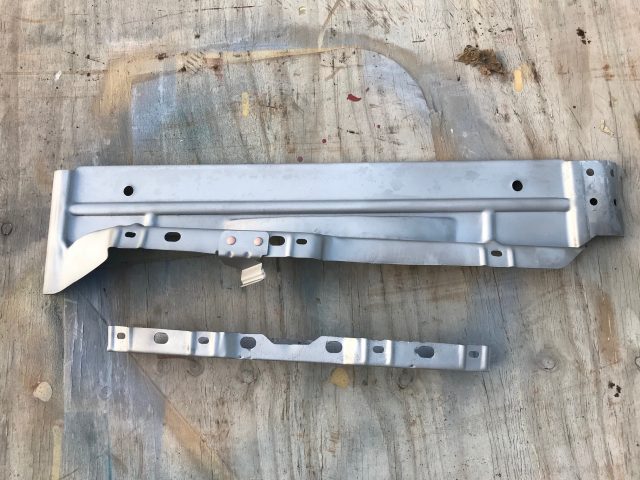 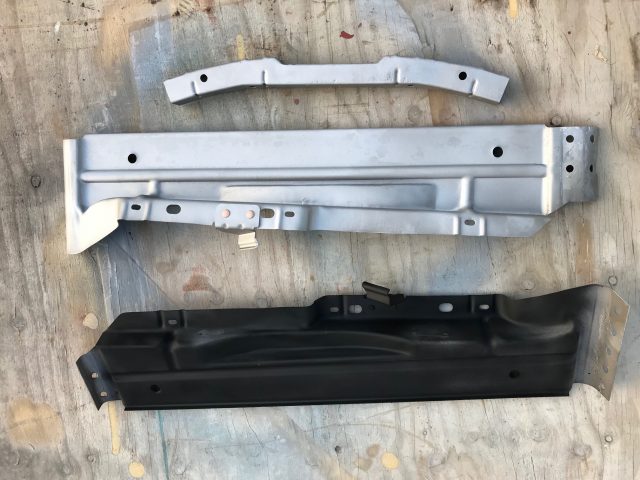 In the meantime, Steve has had the remaining components of the shell repaired and blasted in readiness to paint prior to the re-assembly of the radiator.

Etch primer has been applied, leaving any areas bare that are to be soldered. 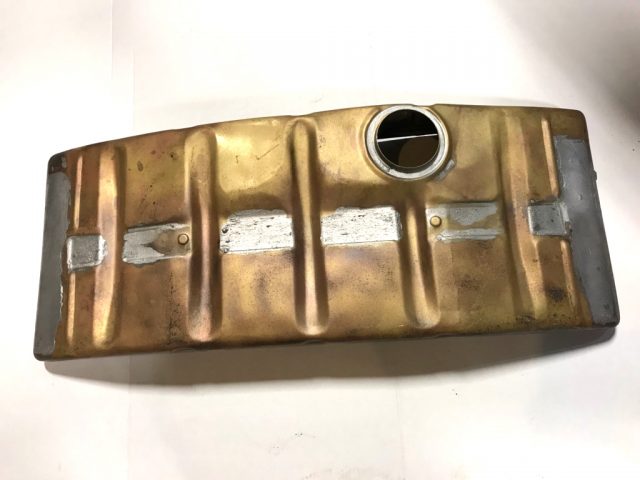 Initial repairs have been made to the top tank of the radiator. 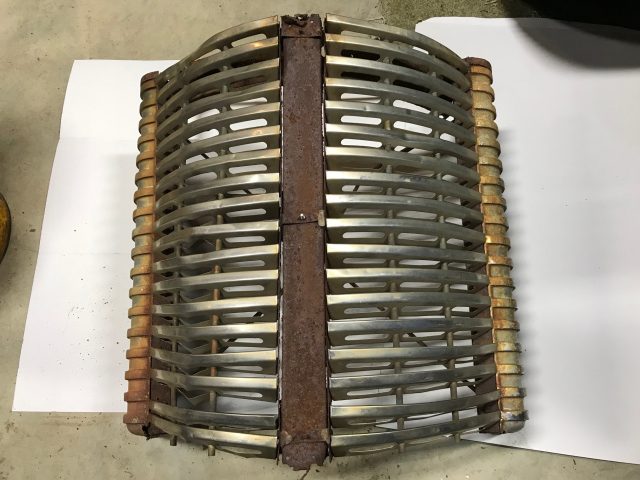 Steve brought the grille back to his workshop at home to work on it during the evenings. At a glance the grille didn’t look too bad but after careful inspection, Steve found that all 36 stainless grille bars are damaged to varying degrees. A few only contain dents while the majority are bent out of shape. 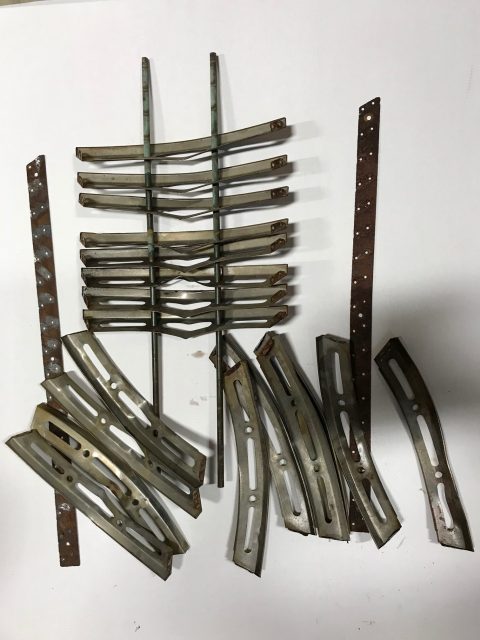 The bars slip over two central posts and are secured each side by rivets on a side rail. 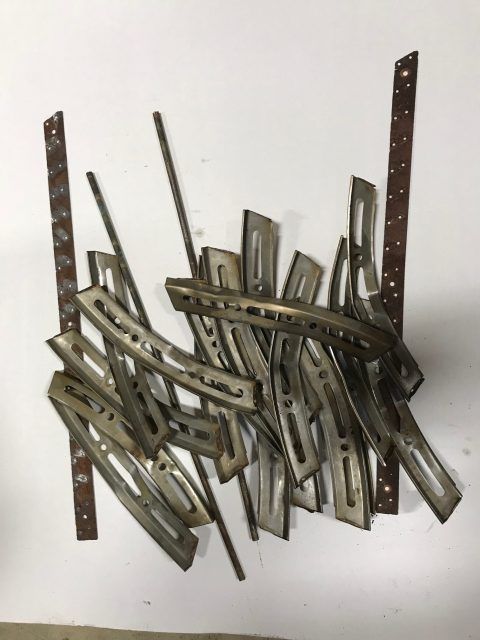 Steve has repaired and polished a couple of bars so far. He has found it to be quite a time consuming process and with so many other areas of the tanker to work on, he will repair a few bars at a time each week. 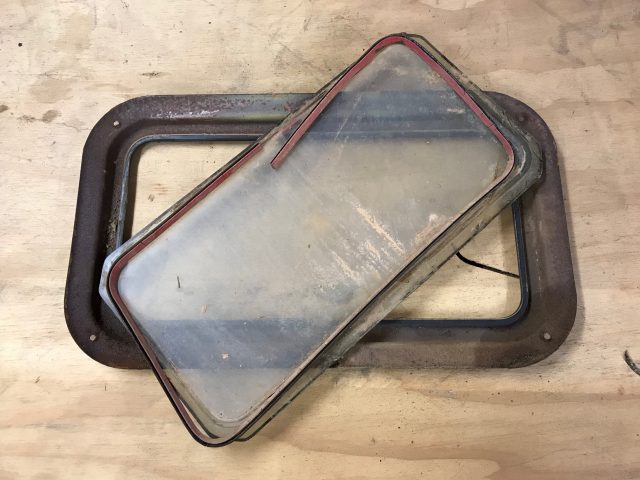 Steve removed the last of the components left in the cab. The rear window came out relatively easily, and removing the steel surround revealed square cut corners in the glass. 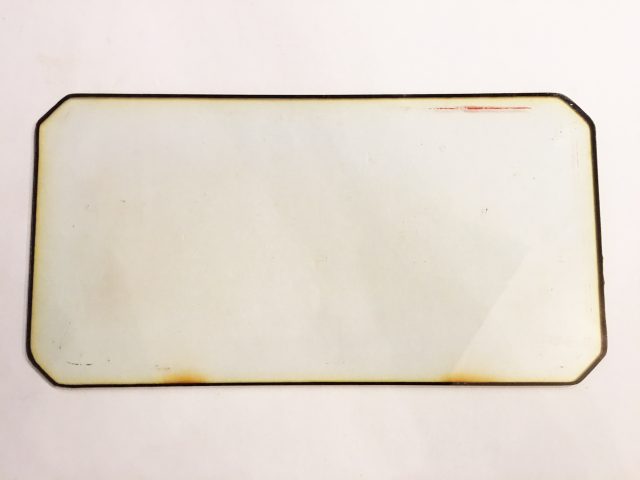 The rear window is in good condition and will clean up well. It will be reinstalled to keep the originality of the stock cab. 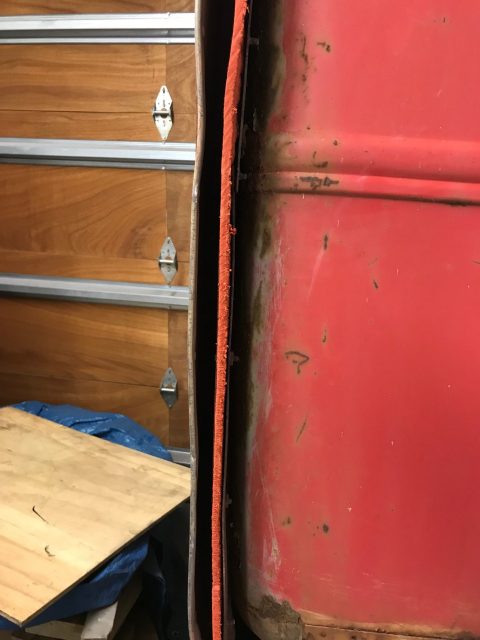 Something that proved to be very difficult and time consuming was removing the length of rubber that was attached at the back of the cab. A system had been developed whereby the rubber was sandwiched between steel and then bolted. 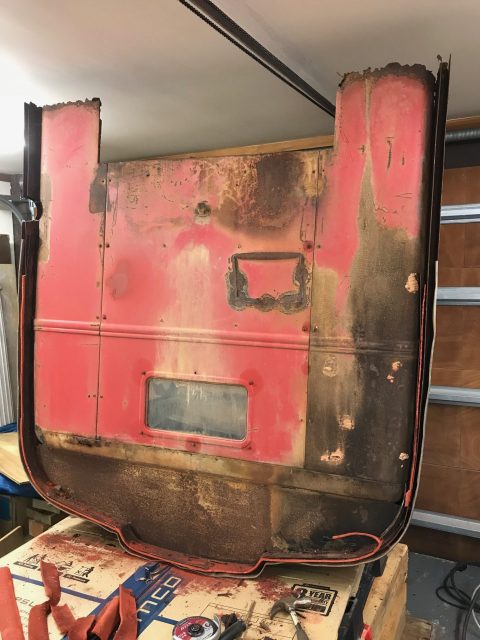 The rubber runs from one side, across the top and down the other. This rubber sits over the space between the cab and the tank body. 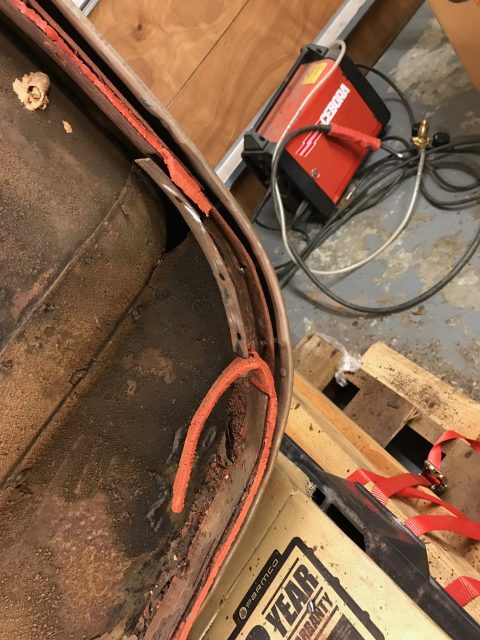 The rubber had totally perished and had become very brittle. Steve struggled to remove one complete piece that could be used for the rubber profile. 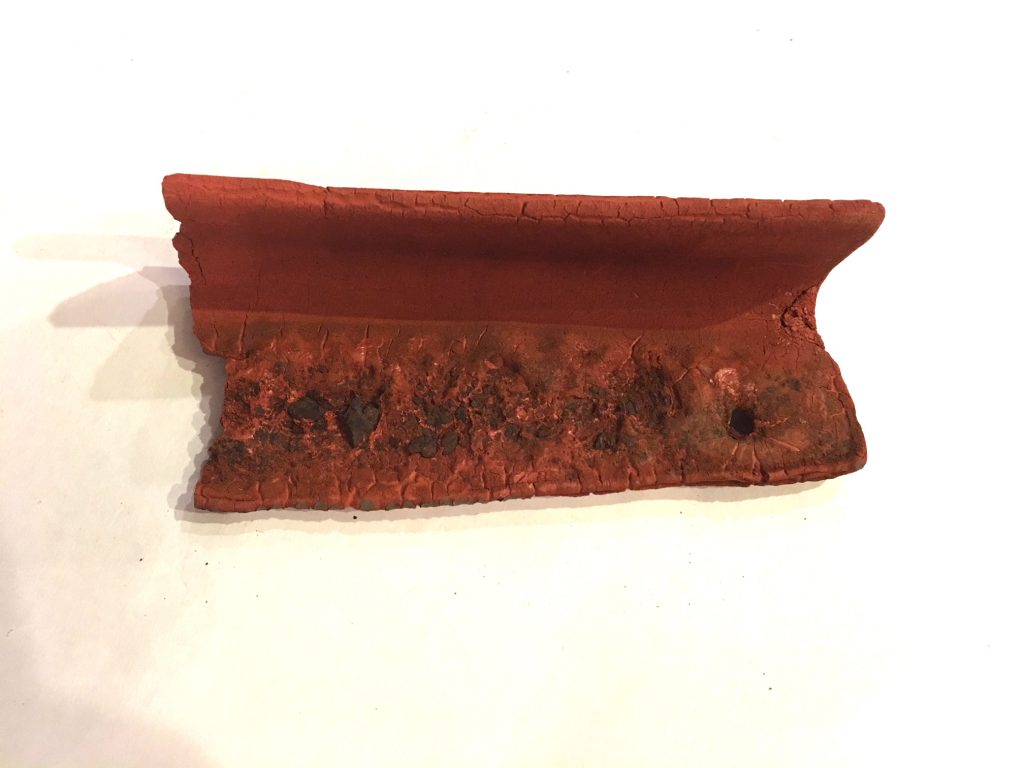 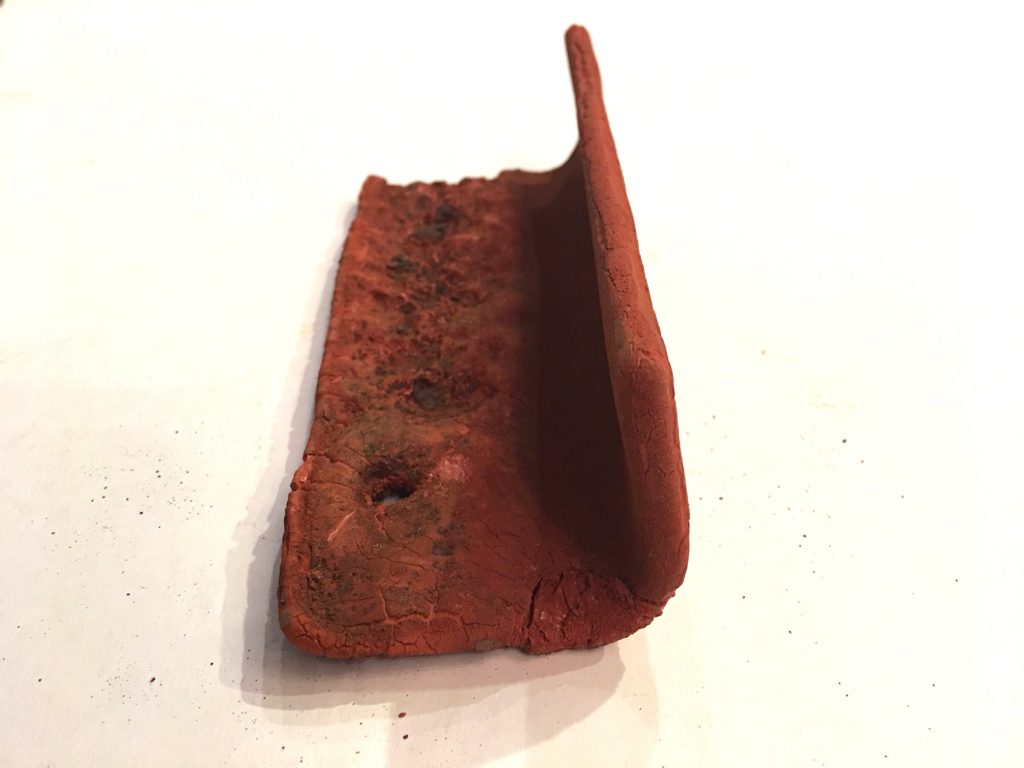 This short length was the only piece still intact that Steve could recover, and is all we have to use for a template. 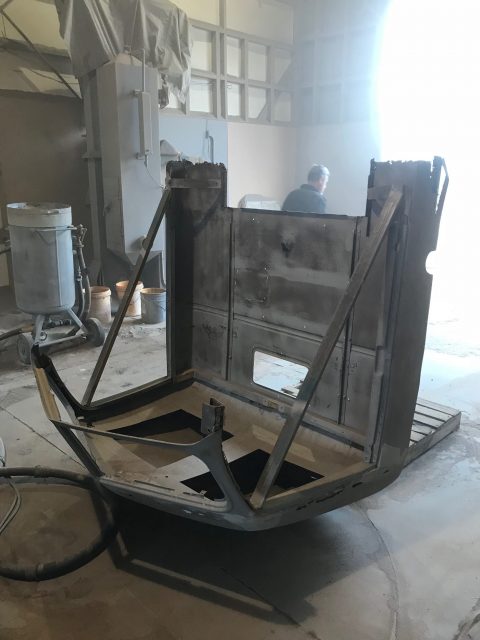 With the cab finally fully stripped out, Steve delivered it to River Road Blast & Paint in Horotiu, the same shop where the tank body was sand blasted. 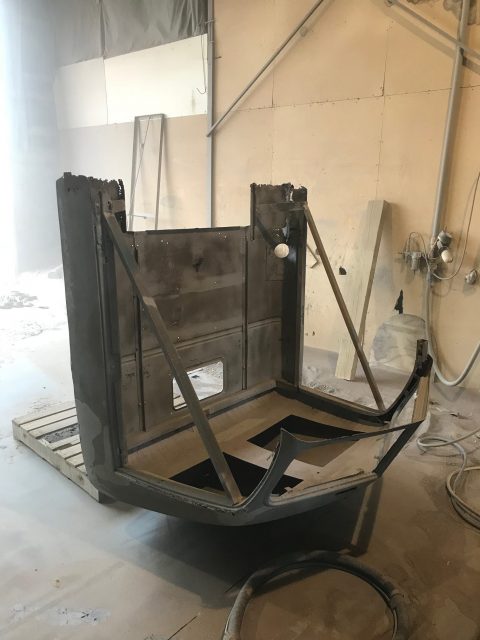 Steve and Tom Andrews were able to wait while the blasting was done. The inside of the roof extension was easily accessed and brought back to bare metal. 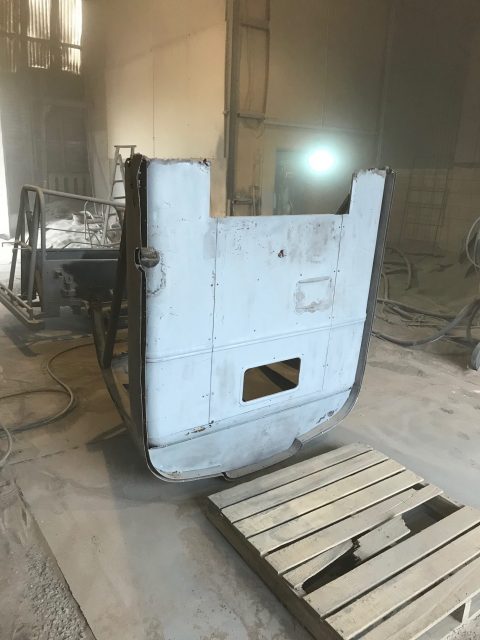 The roof and back of the cab came through the blasting reasonably well with no big surprises. 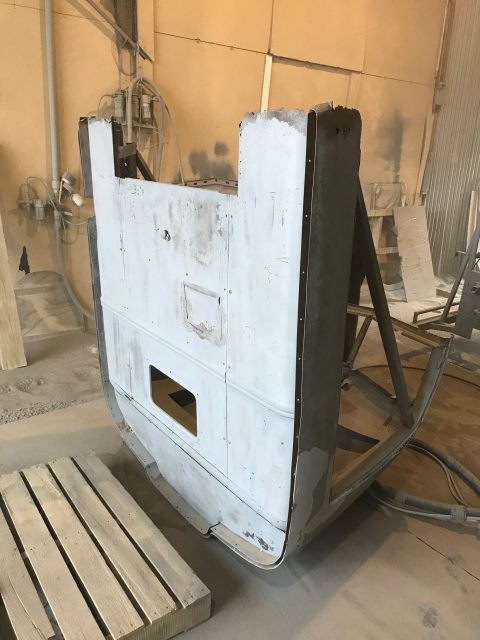 The holes through which the rubber is bolted are more visible now that the back has been cleaned up. 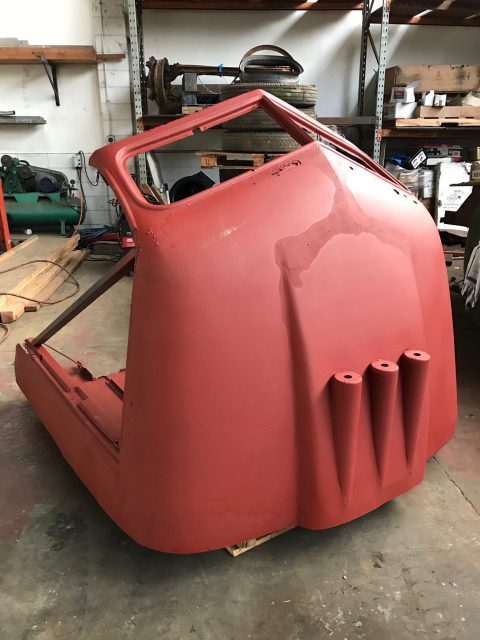 Once finished, Steve and Tom took the rear piece of the cab straight back to the Classics Museum workshop and painted it with etch primer. Steve was then able to bring it back up to Auckland on the same day. 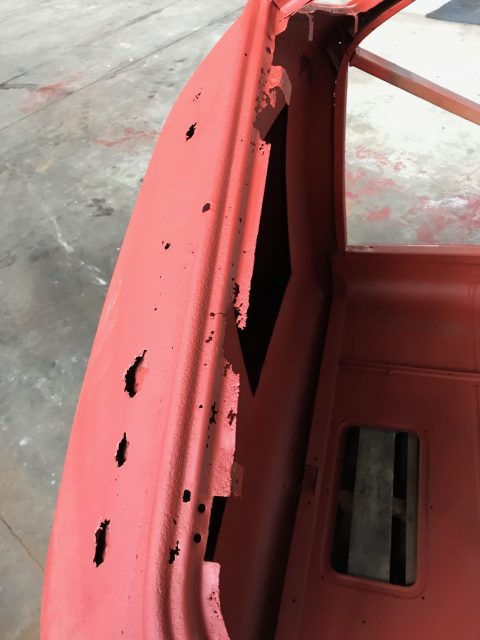 As expected, the area above the windscreen revealed multiple air vents!

Our thanks to Tom Andrews once again for his time and help on the day, and to the team at River Road Blast & Paint for accommodating Steve with the “while you wait” service.