With the Diamond T cab now off the chassis, Steve decided to transport it back home so that he could start dismantling it during the evenings. 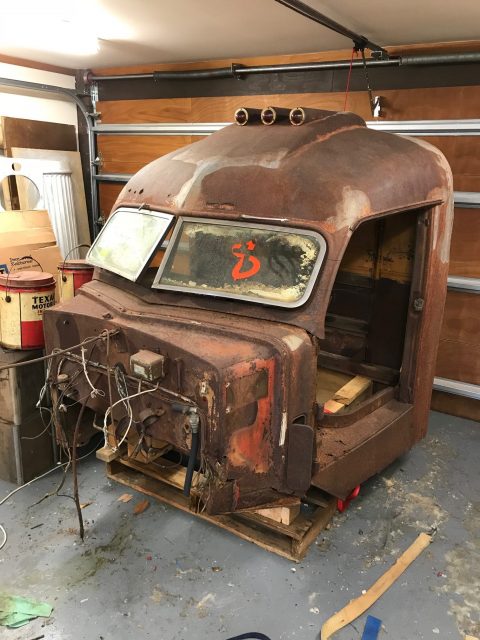 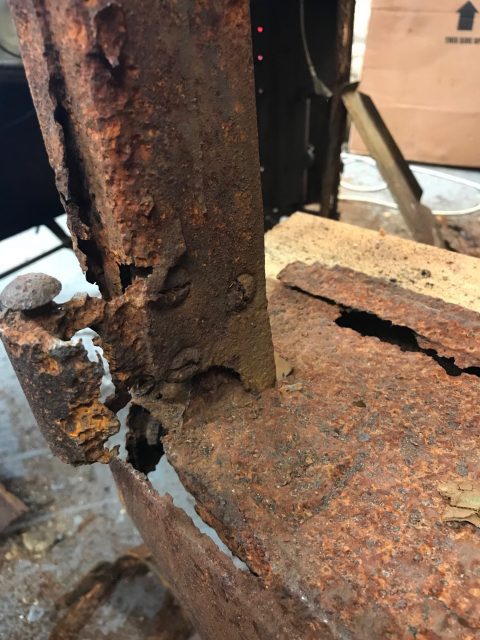 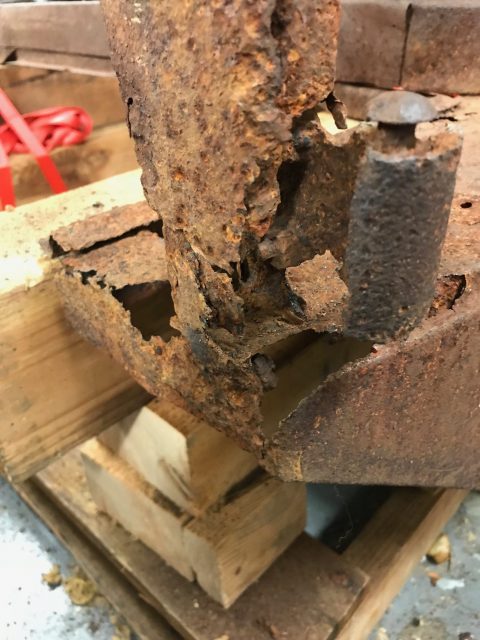 The first task for Steve was to separate the cowl from the pillars. Prior to detaching it, the left A pillar was only just hanging on by a few scales of rust. 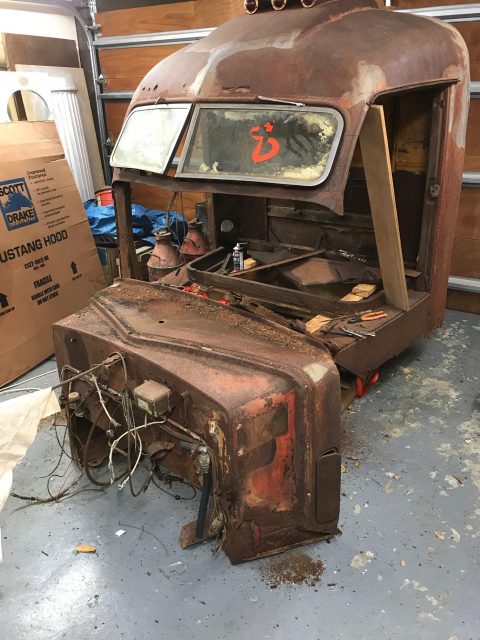 As soon as the cowl / firewall was separated from the cab, the left A pillar from below the windscreen dropped away. A temporary prop was put in place to support the roof until the cab could be laid on its back. 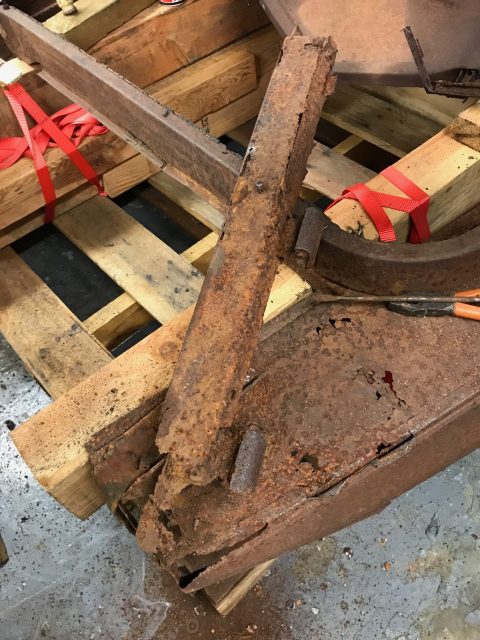 The remains of the left A pillar. 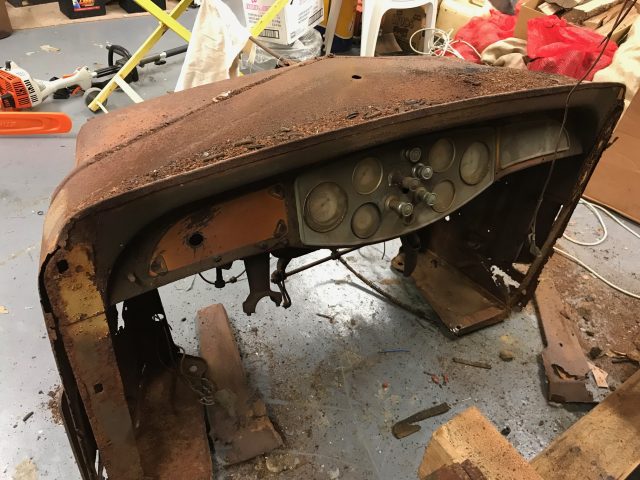 With the exception of some metal fatigue cracks, the upper section of the firewall appears to be reasonably good. The cowl has a few rust holes in it but does seem to be quite solid. And the structure is self supporting so that has to be a positive! All will be revealed once the panels are sand blasted. 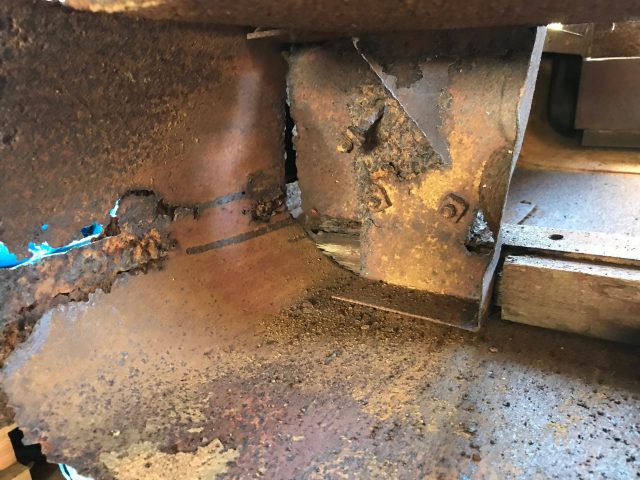 This image is looking at the right hand B pillar at the bottom. The timber that is visible runs across to the left hand side. The rear of the cab is mounted on the chassis through this wooden beam. 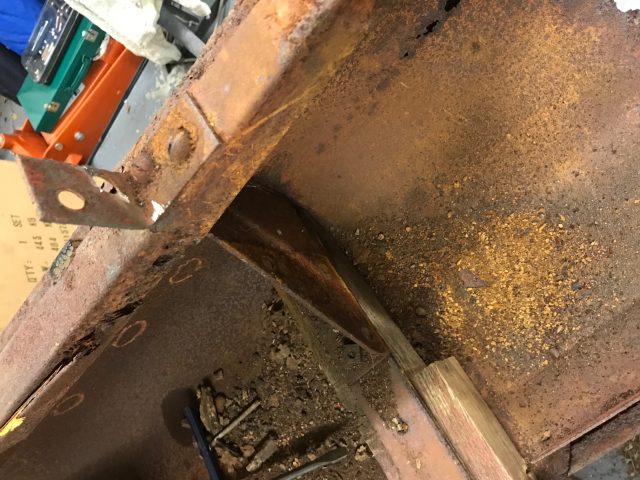 Another view of the lower right B pillar. 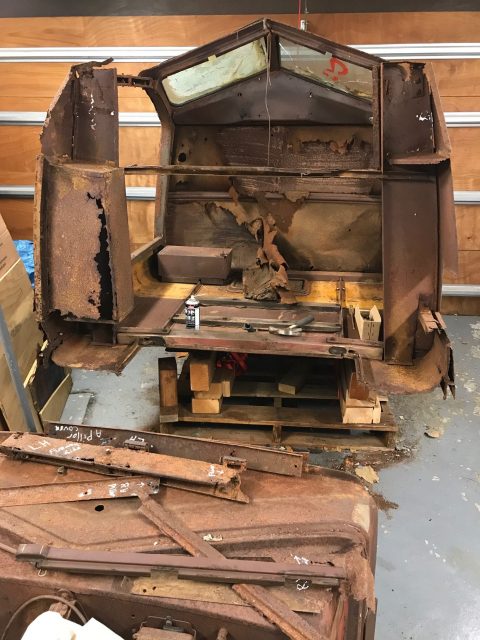 Steve carefully laid the cab on its back with the remaining components still intact. 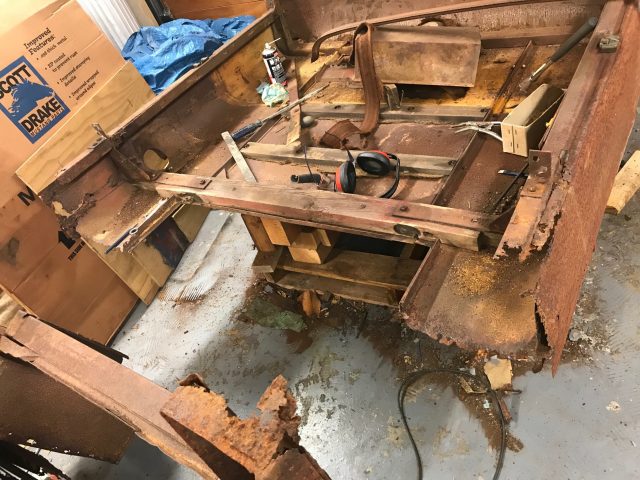 He then removed the seat riser and both sill panels. 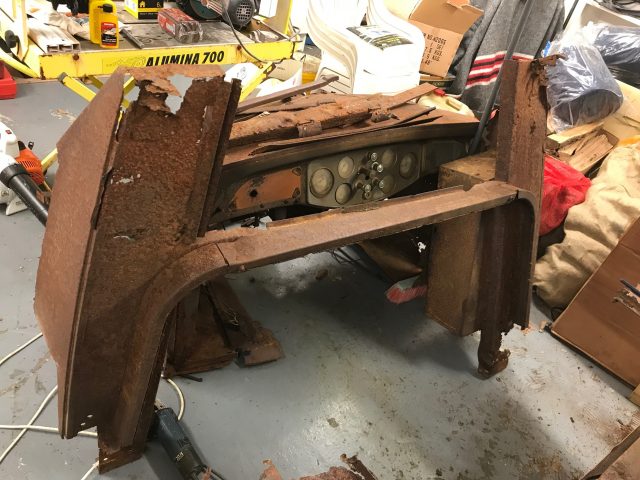 The seat riser and left and right sill panels after removal. 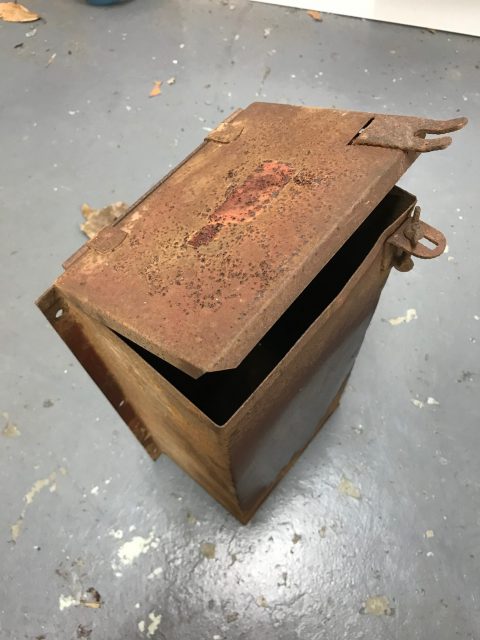 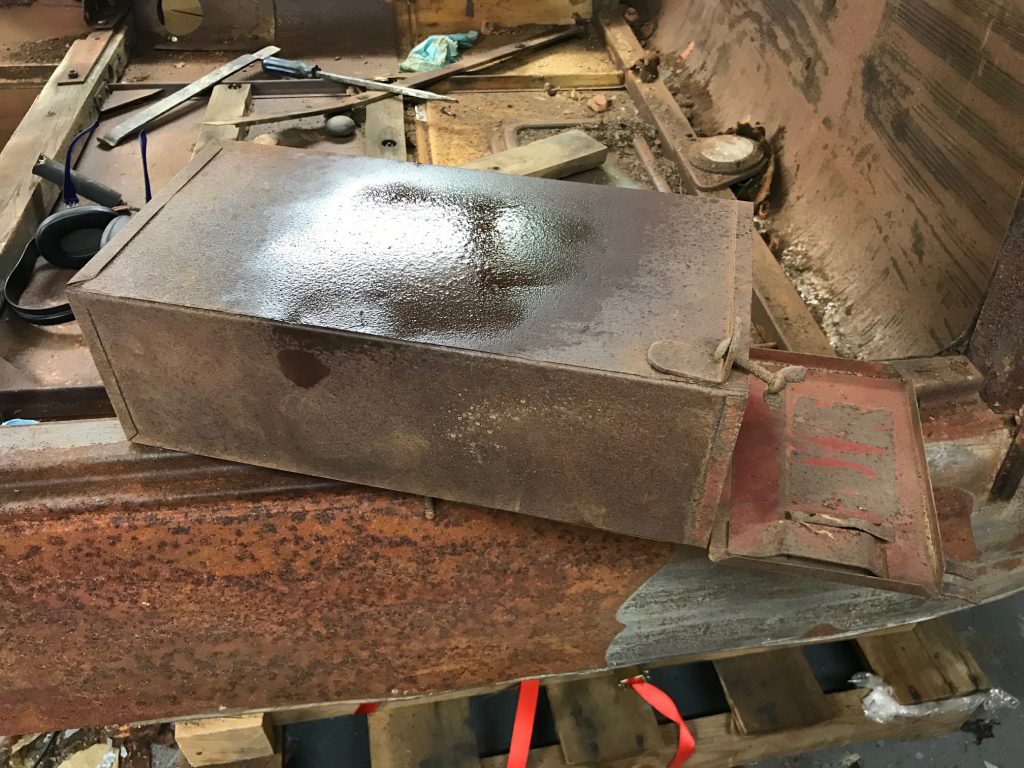 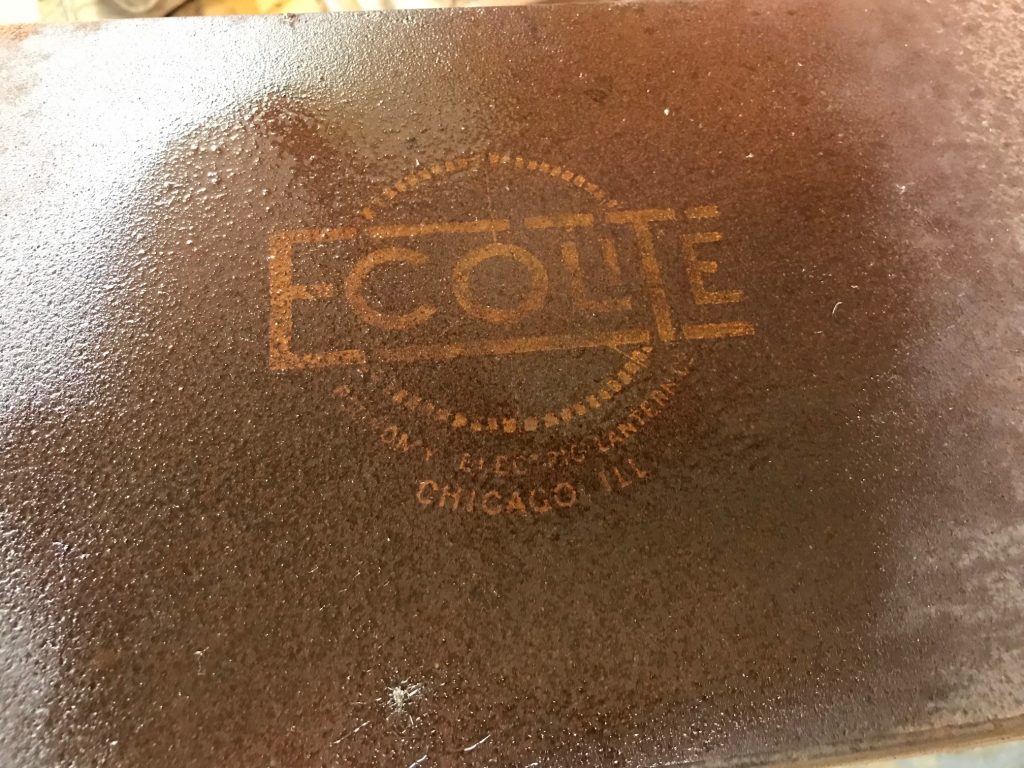 This metal box was mounted inside at the back of the cab above the passenger seat. After researching the name, we found that Ecolite manufactured lanterns back in the thirties. Positioned up high at the back of the cab, the lantern would have been easily accessible by the driver and was probably a much used piece of equipment. Despite being empty, the box is yet another little snippet of the tanker’s history. 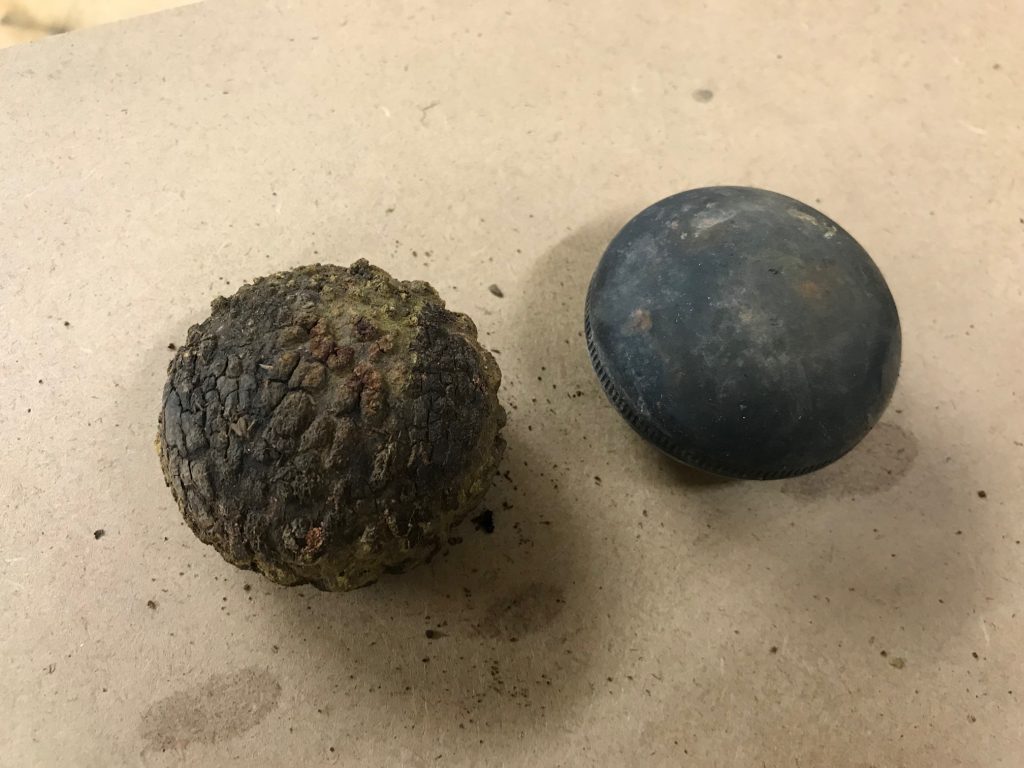 When the head lining was removed, Steve discovered these two gear shifter knobs which were jammed between the head lining and the cant rail. It is hard to tell because of the condition of these if they were spares or if they had been used and discarded. Always a thrill to find hidden little treasures no matter what they are. 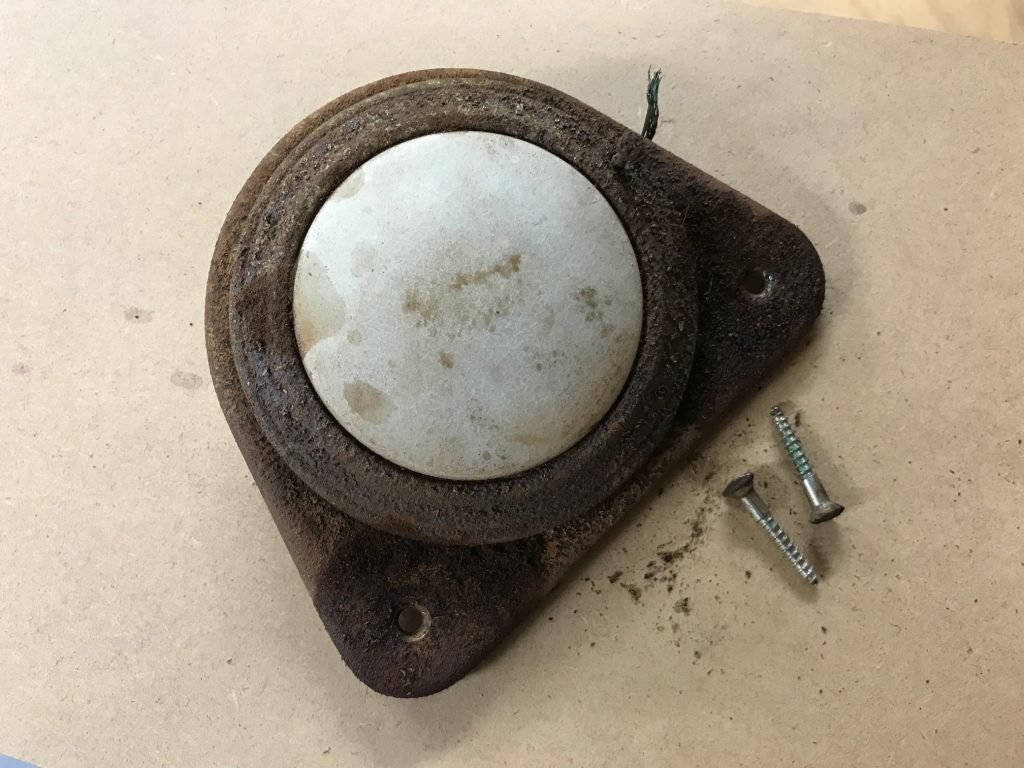 The internal light which was mounted above the rear window of the cab. 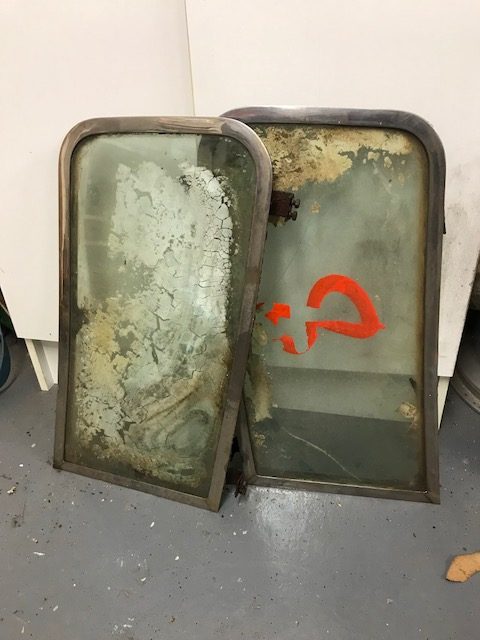 The windscreen in the Diamond T cab was made up from two separate screens. These could be wound open with winders for ventilation as there was no top cowl vent.  The outside windscreen trims look to be in relatively good condition. 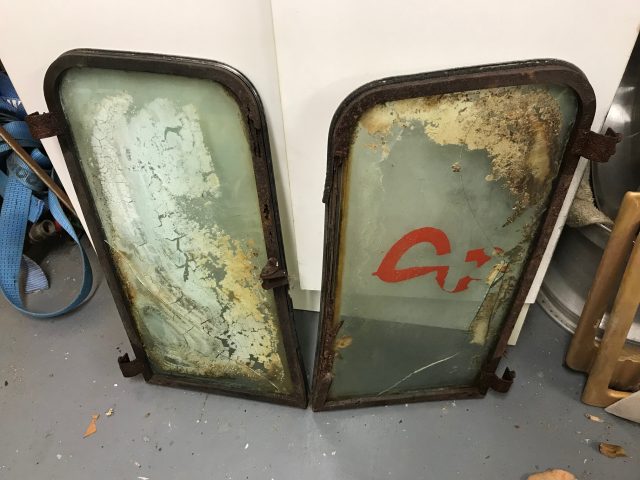 Looking at the windscreens from the other side shows the deterioration of the inside frames. 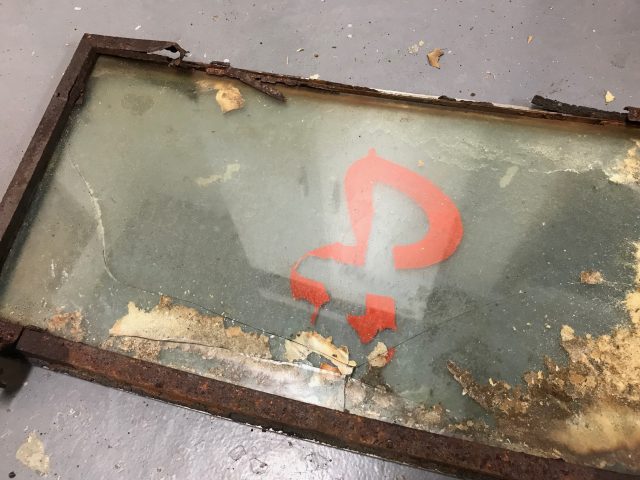 A closer view shows part of the inside frame completely missing. 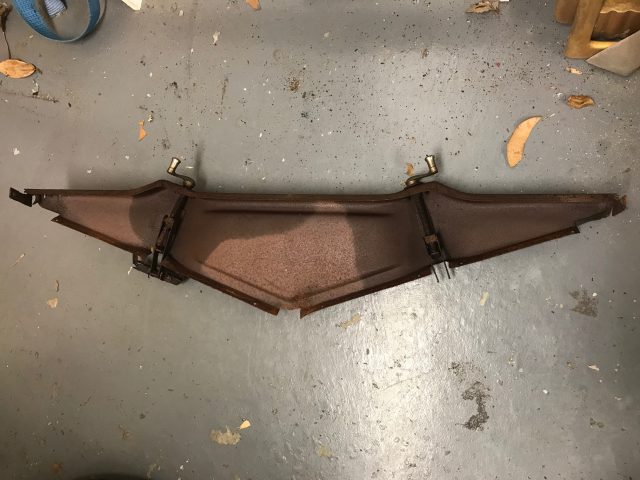 This panel sits on top of the dash area and houses the two windscreen winders. 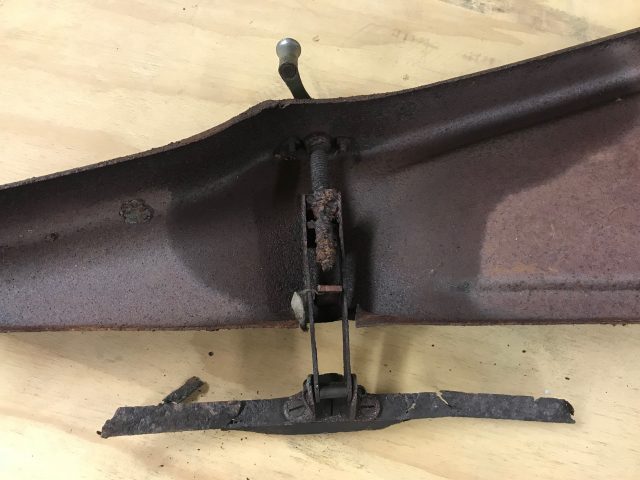 The winder mechanisms are beyond repair so we would very much appreciate hearing from anyone who might be able to help with these. 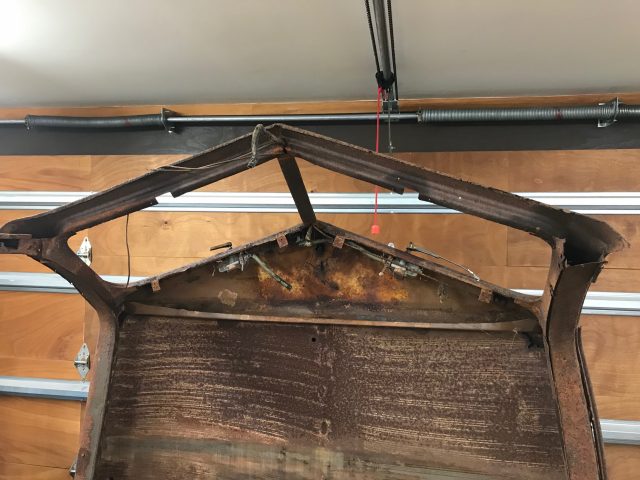 This image shows the front framework of the cab. With the hood lining and bow removed, the original factory roof is now visible. 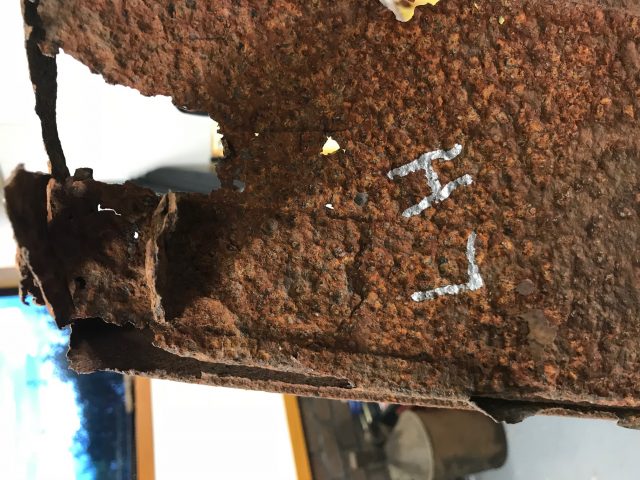 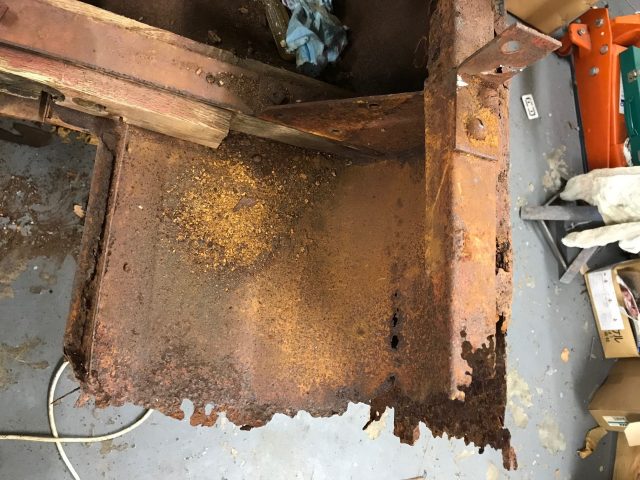 The bottom of the B pillar and the rear corner of the cab. 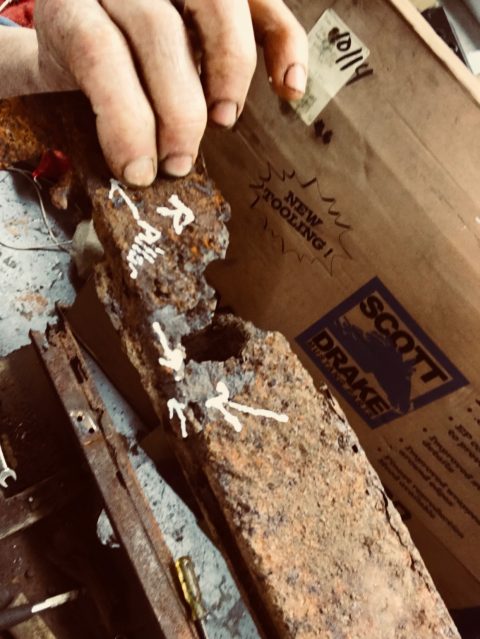 The bottom of the right hand A pillar. 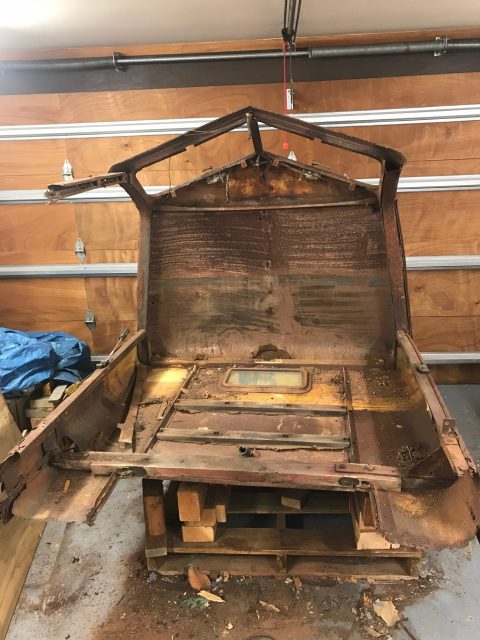 The remaining components still to be removed are the wipers, door catchers, header panel bow and the wood in the back of the cab.

The rear window of the cab was left intact when the Heil tank body was fitted to the Diamond T truck. 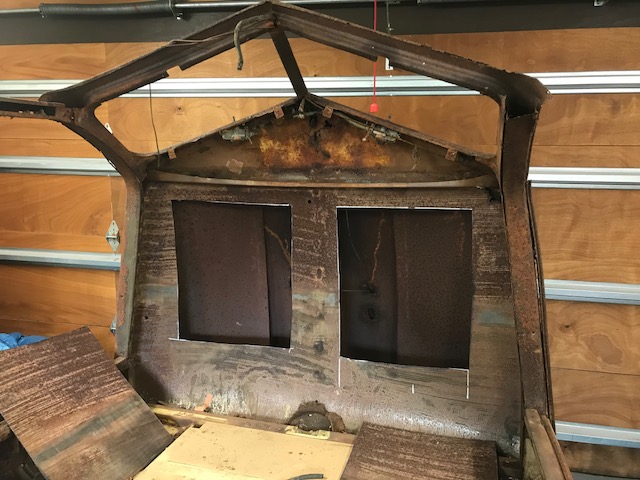 During construction, the Heil Co had hand crafted the stylish roof extension to blend the truck into the streamline tank body.

But the original factory roof was left intact and sat above the head liner inside the cab. This created a cavity area between the two layers and water had leaked in through the three roof bullet lights. The water would have been trapped in the cavity, and over time caused both roof areas to rust.

Steve has now cut two holes in the original factory roof in order to access the cavity. This will enable the interior of the roof extension to be sand blasted and the necessary repairs made to the rusted areas. 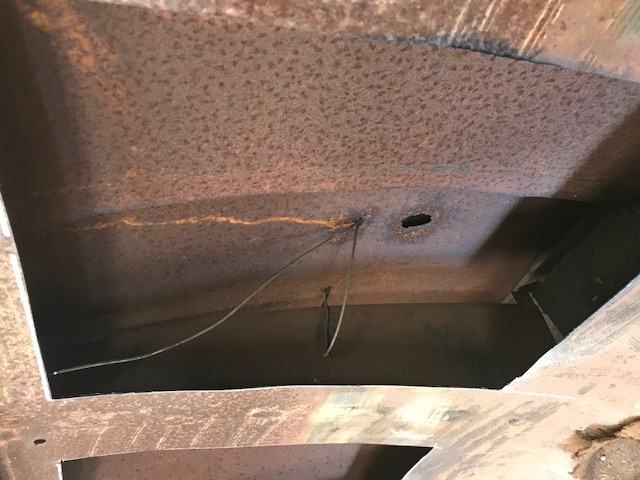 The wiring from the three bullet roof lights protruding through the roof extension.

Steve has already started making templates of the sections that will need to be totally replaced.  Once all this is done, he will construct the mobile work platform / jig in readiness for when the Diamond T cab is ready to be reassembled.