The repairs to the Heil streamline tank have begun at Creative Metal Works Ltd in Pukekohe. Working on the Texaco tanker is Simon Tippins and Craig Garland. 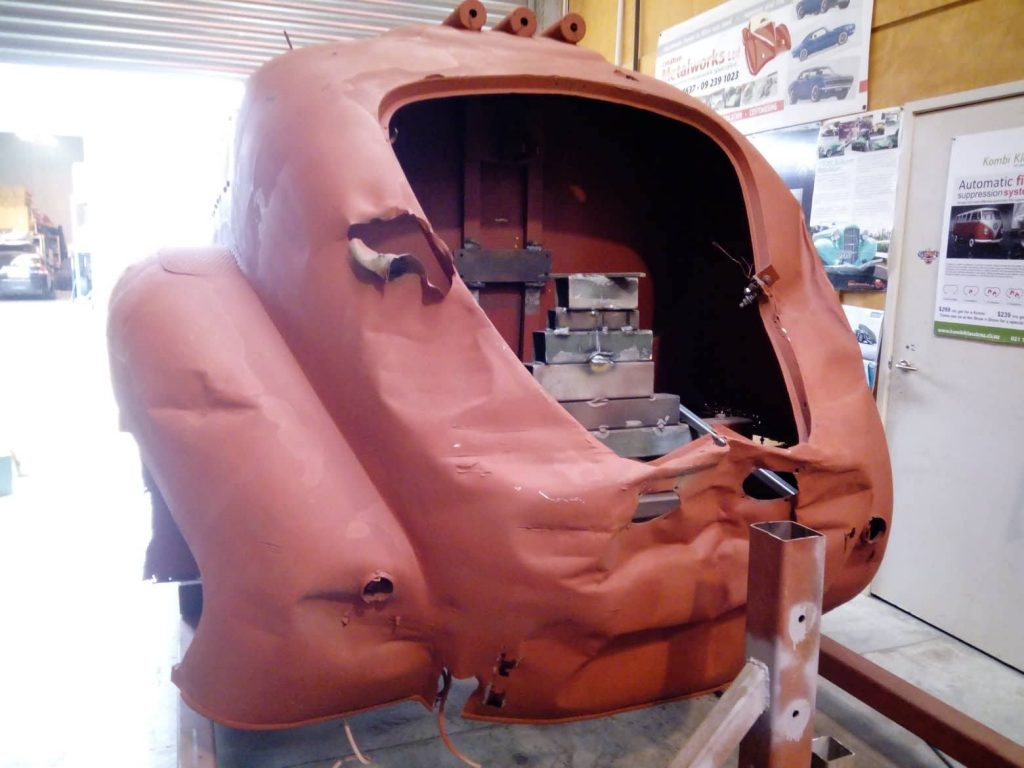 There will be challenges for Simon and Craig when repairing this tank body due to the sheer thickness and strength of the heavy gauge steel and lead. The only option to regain shape in the worst areas will be to use heat and a porta power. 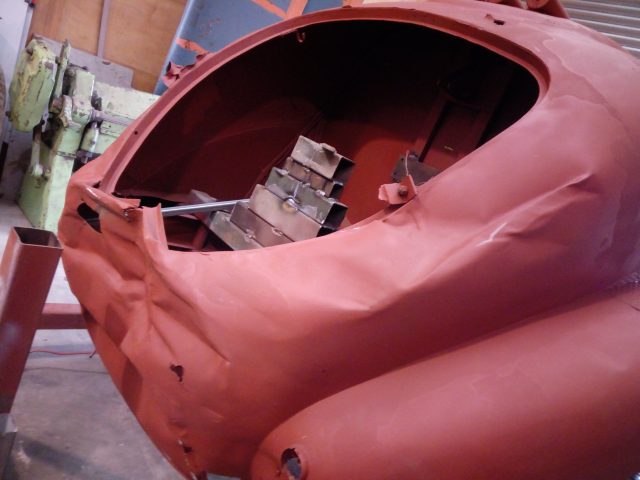 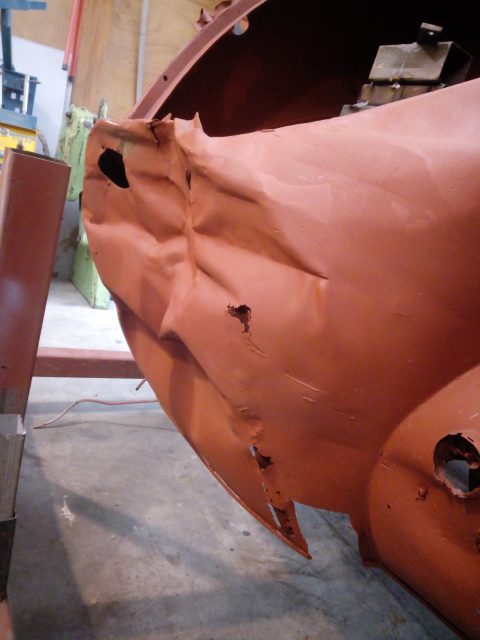 Simon began by focusing his attention on the badly damaged areas at the rear of the tank body. 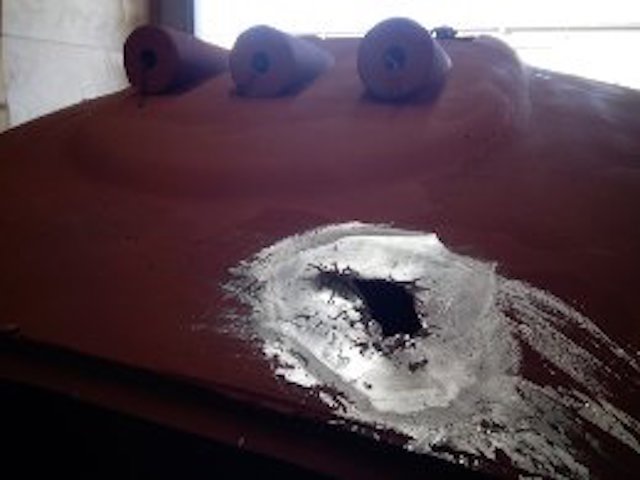 The first task for Simon was to repair and patch the hole that was above the trunk. 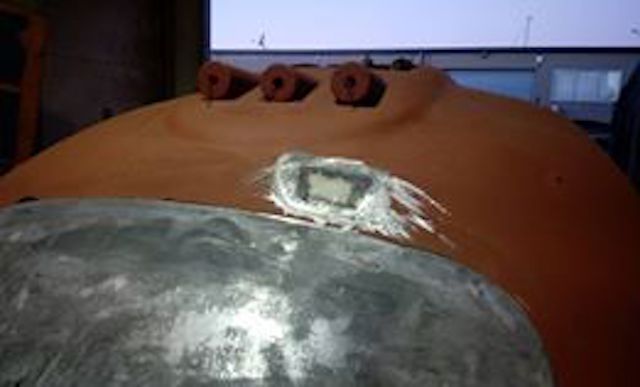 When Steve first started the restoration, there was only one end of the trunk lid hinge bracket attached to the tank body. To keep it safe, Steve had removed it prior to the body being sand blasted.

So Simon reattached the hinge bracket to enable him to hang the trunk lid. This would give him the lines and shape to work with when pushing out the back of the Heil streamline tank. 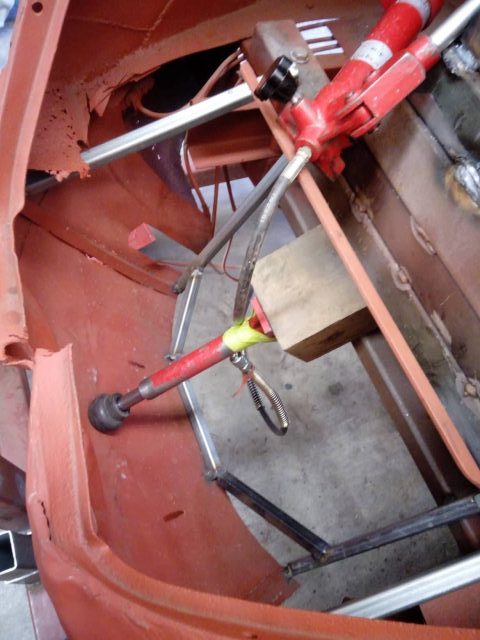 Simon cut off the support structure of the rotisserie framework to allow him better access to the back area of the body. He then welded some temporary braces in the lower area below the floor level of the trunk to prevent it rolling under when pushing out the steel above. Simon placed a porta power inside the trunk and pushed out the majority of the damage at the back of the tank body. 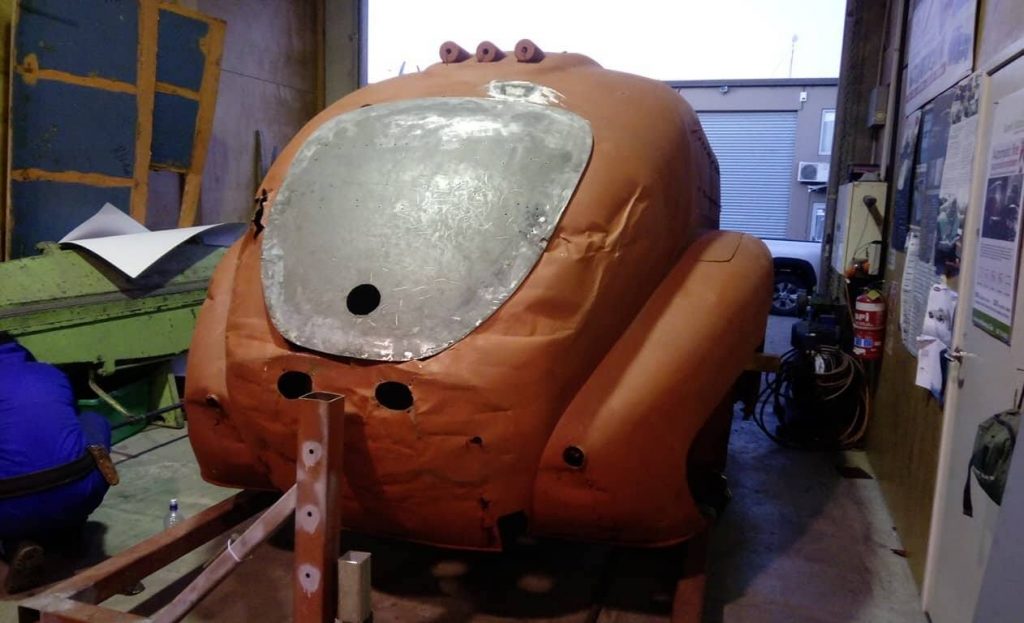 The art deco look of the streamline tank started to re-emerge as more of the original shape was recovered. 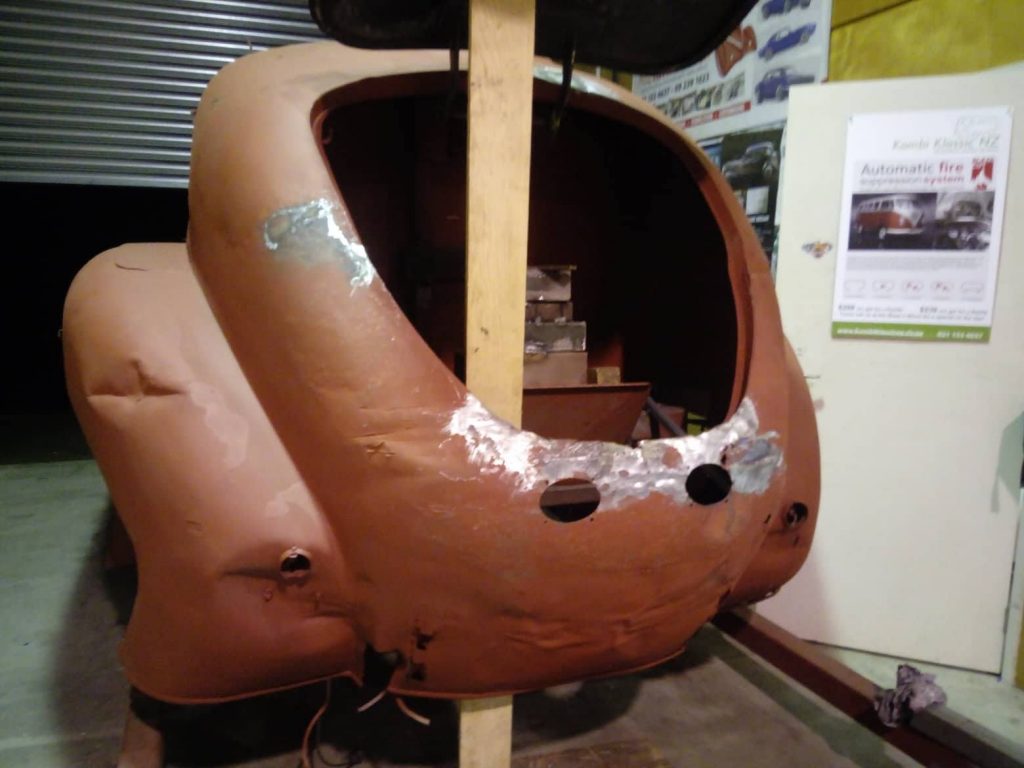 The jagged hole to the left of the trunk was heated in order to straighten it out and was then welded back together. Simon has discovered rust under the lead above the turn signal lights and will therefore have to cut some of that area out and replace it. 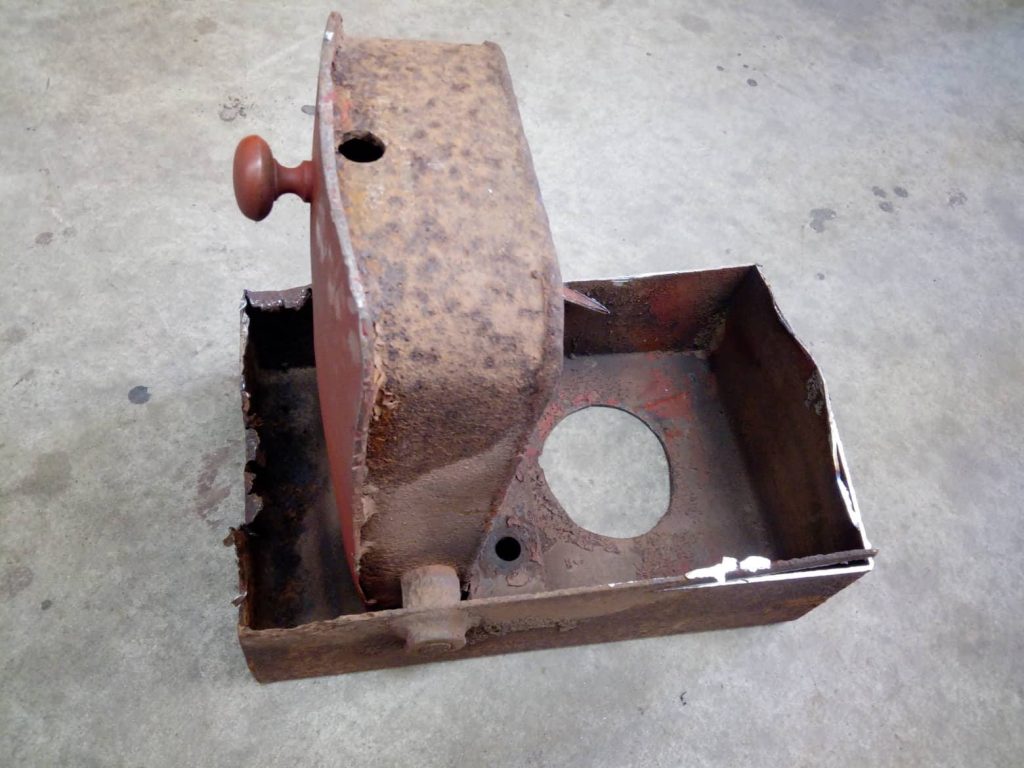 Situated in the two front guards of the tank body are fold out steps. These steps enabled the tanker driver to gain access to the walking area along each side of the tank.

The step mechanism pivoted on a shaft that was mounted inside a steel box casing. The box was then welded to the tank body behind the front guards.

After 80 years, both steps in the tanker had fully seized up – the driver’s side was seized open and the passenger side was jammed closed.

Craig set about to resurrect the boxed casings that house these steps. Steve had already cut the shaft on the driver’s side to remove the protruding step. So Craig cut out the remaining box casing on that side. On the opposite guard, Craig accessed the box casing from behind and removed it with the step still contained inside.

Keeping in mind that everything was hand fabricated back in the thirties, Craig commented that there was a noticeable difference in the workmanship from one side to the other. 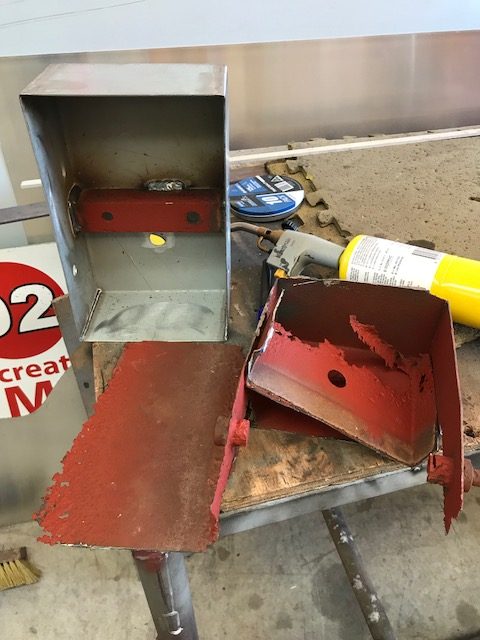 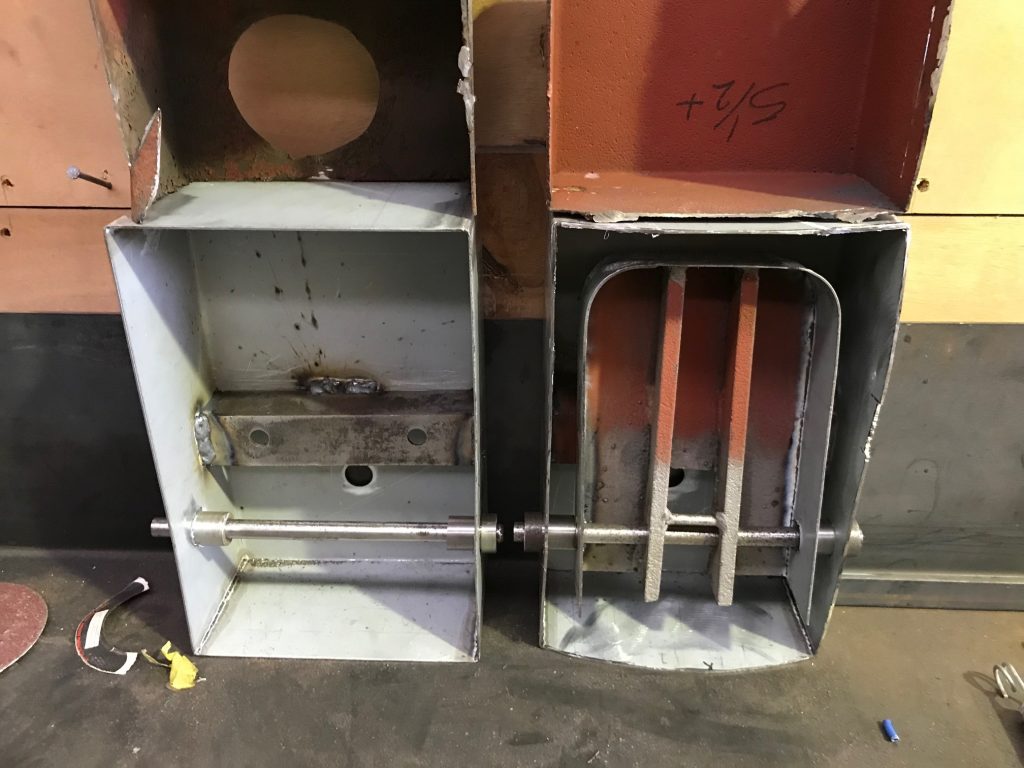 Steve machined new bushes and the shafts were repurposed from the original locker door hinge pins. This was a deliberate little touch on his part to keep as much original material in the tanker as possible. 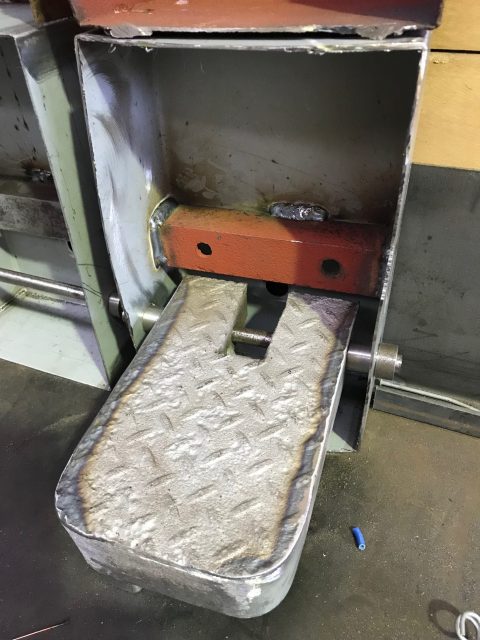 The step itself was pulled apart to be sand blasted and to remove the seized shaft. Craig has now welded it back together and reassembled the step.

Just to note that the design of these steps was very impractical as they were not serviceable once the casing was welded into the body. In order to keep the tank truck original, we will leave the design as is. Prior to refitting the box casings, Craig will apply a long-lasting lubricant to the shafts to ensure a smooth operation of the steps for at least another 80 years! 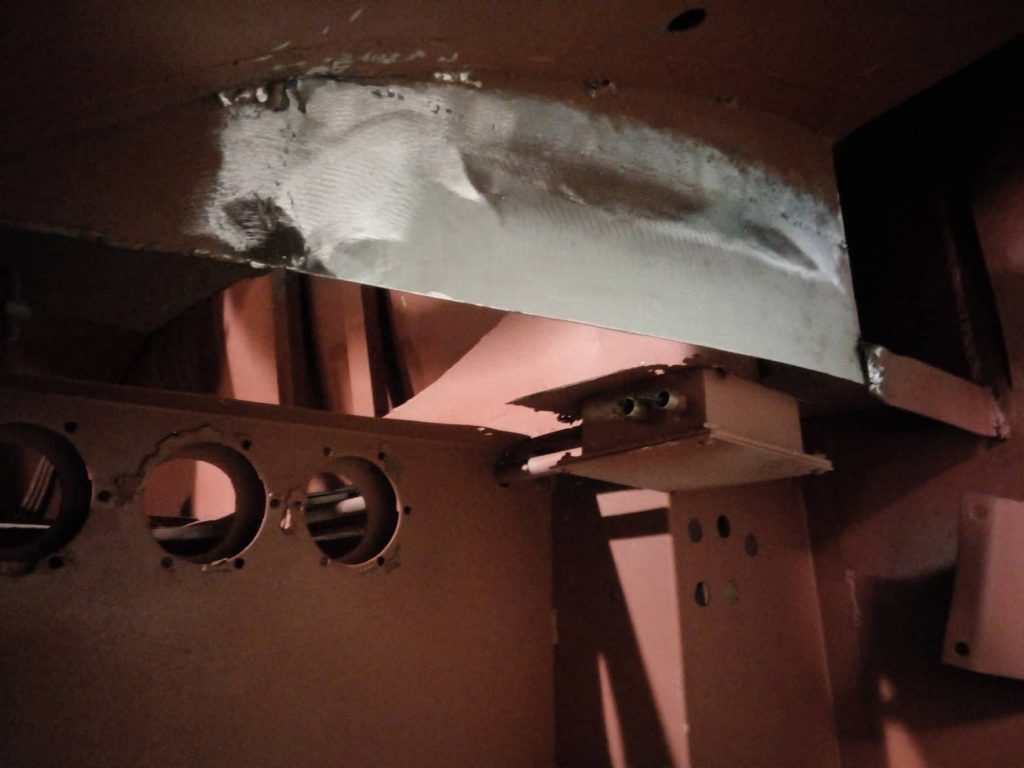 Craig then turned his attention to the locker compartments on each side of the Heil streamline tank. He has started replacing rusted areas as he works his way through the lockers. The image above shows where the pipework enters the right rear compartment before connecting to the multiple valve selector. 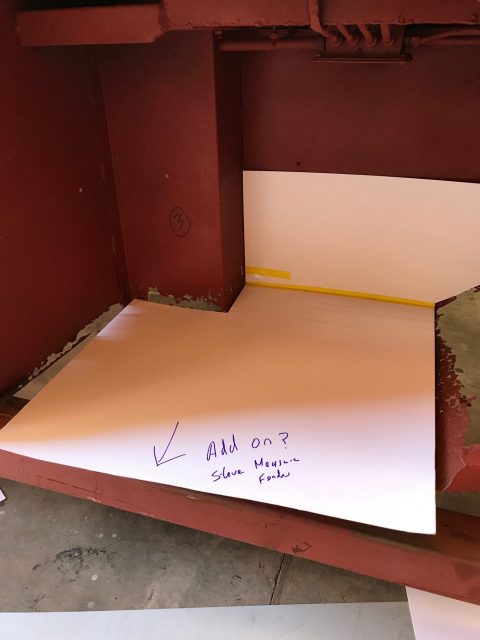 Steve made up cardboard templates for new panels to be cut. Shown is the left rear locker. 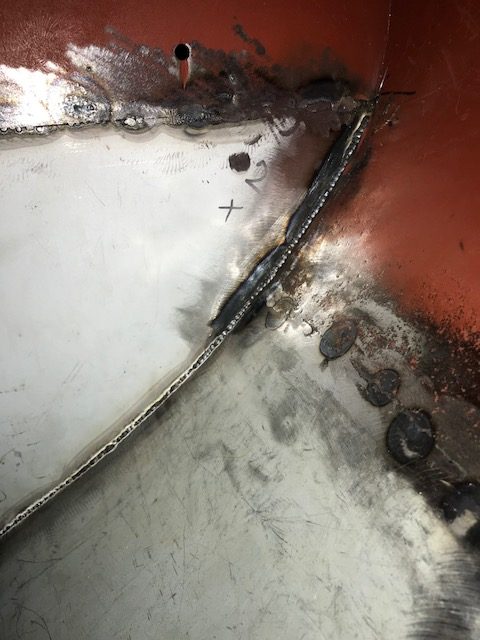 The weld line inside the left rear locker as it curves up at the rear. 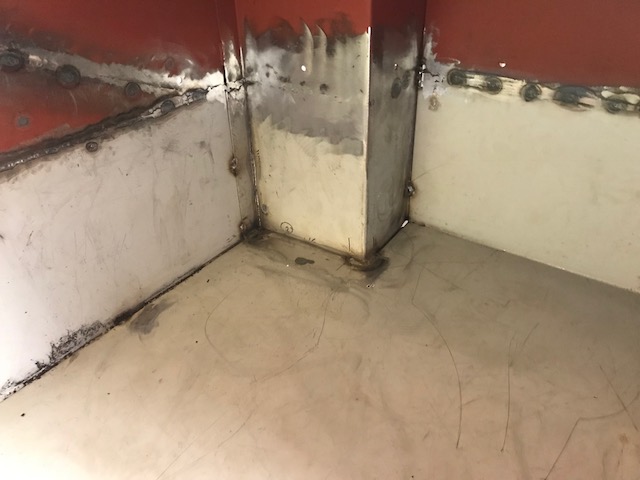 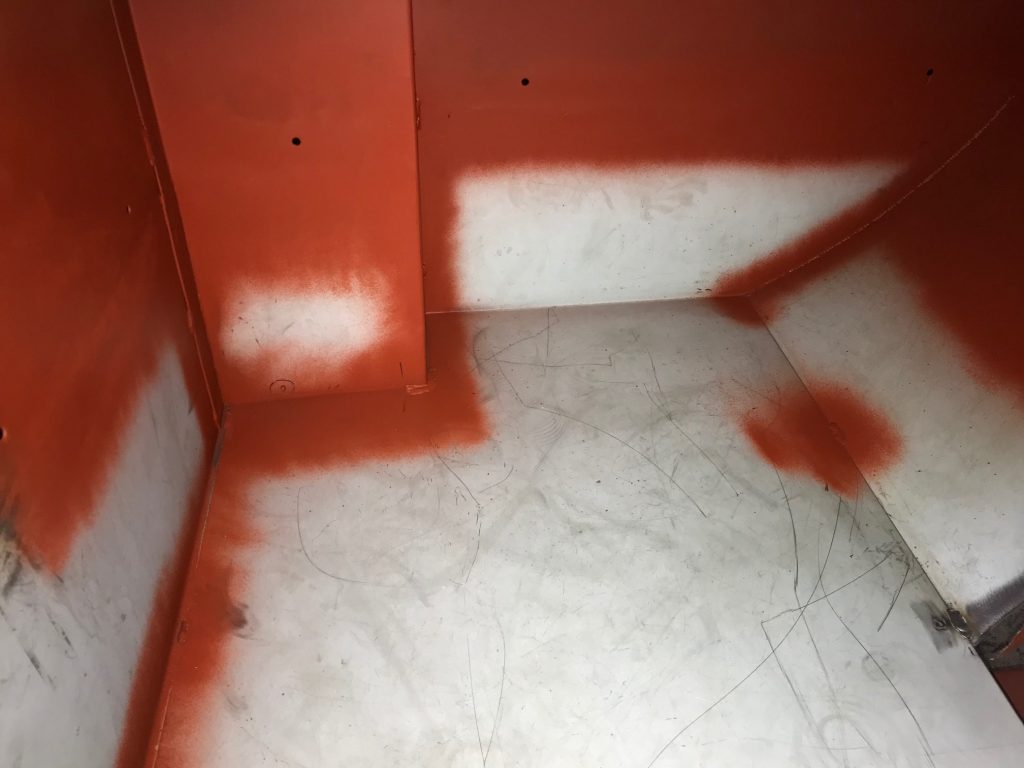 Further images of the repairs made to the left rear locker. 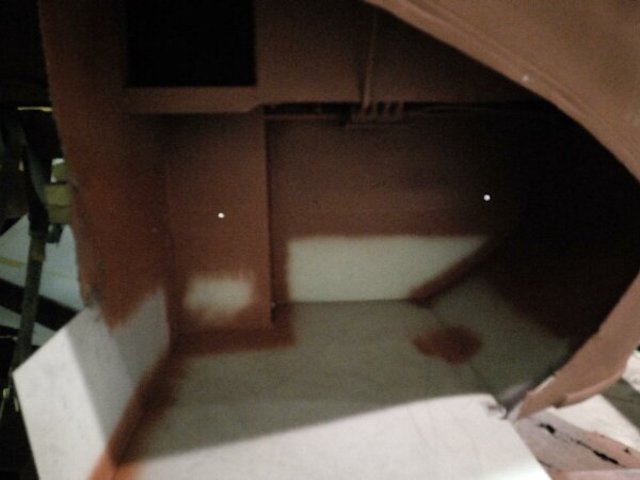 The two holes that can be seen in the back panel mark where wooden protective strips were mounted horizontally around each compartment. At a guess, this may have been to prevent sparking from metal containers rubbing against the sides of the compartments when being transported. 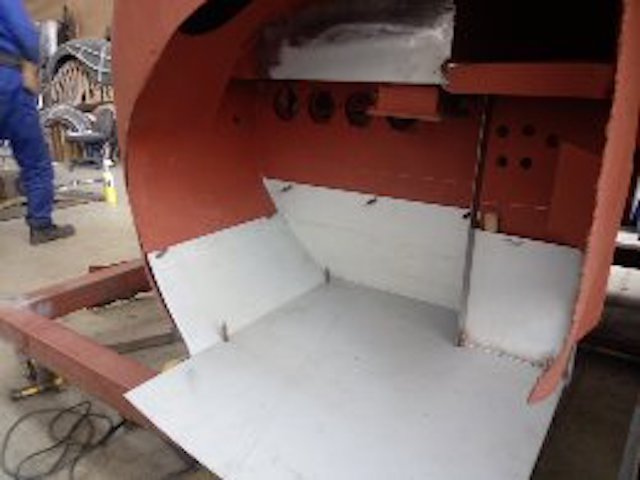 The right rear compartment which houses all the petroleum equipment. 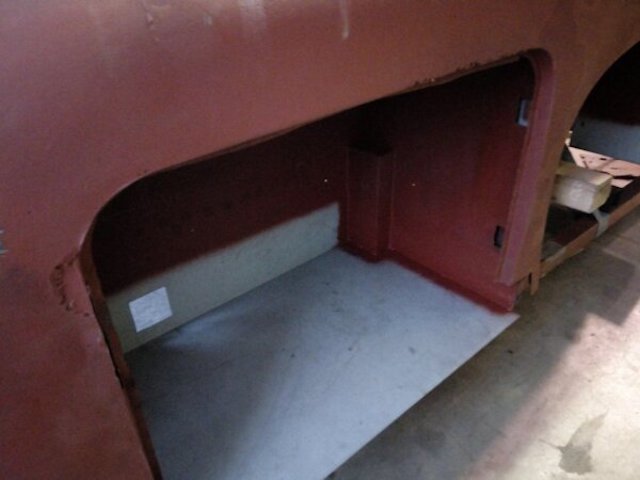 The new floor in the left hand forward locker.

We very much appreciate the work in progress photos that Simon has sent us so that we can share them on this blog. Our sincerest thanks to Simon and Craig for the great job so far and their interest and enthusiasm in the Texaco tanker project.