In our first post “Diamond in the rough – the lucky survivor”, we added a series of photos detailing the condition of the Diamond T truck and the Heil tank body. When referring to the image of the rear hatch / trunk, we asked if anyone could help with information on the lining of the trunk floor. 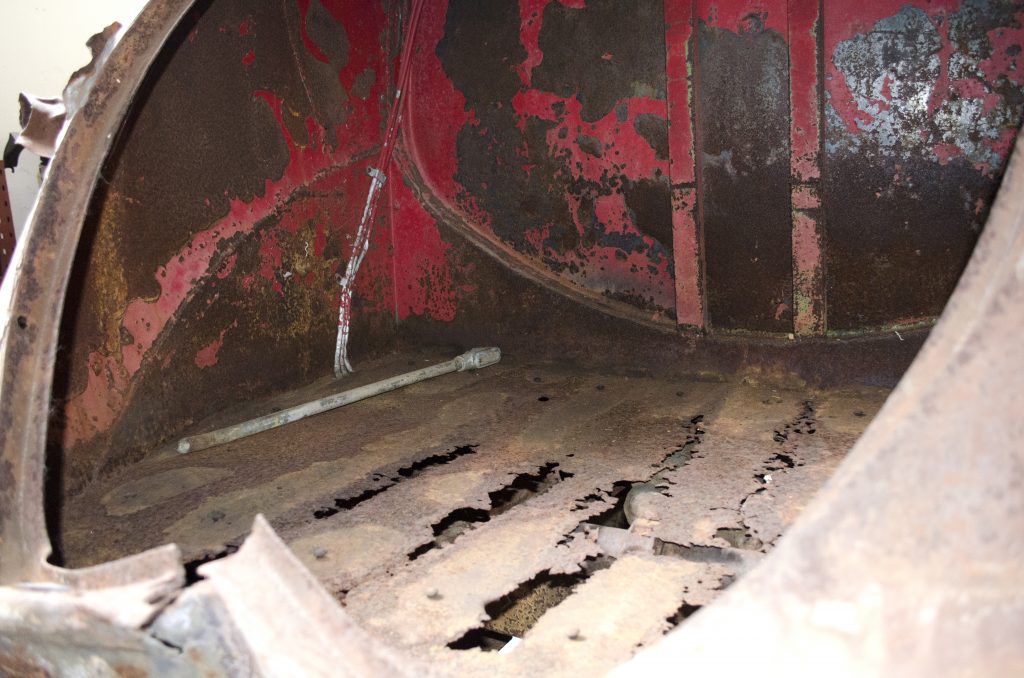 A view of the rear hatch / trunk. Positioned across the badly rusted floor are upright extended bolts which we suspect may have secured wooden slats on top of the steel floor. There are remnants of wood in other locker compartments as well. Can anyone shed any light on this please? Are there any family members of drivers, or people who saw these in the forties or fifties, who recall if timber lined the floors of these trunks and lockers?

Amazingly, not only has our question been answered, but we have also been provided with a photo of inside the trunk of this actual tanker while it was still located in South Carolina. 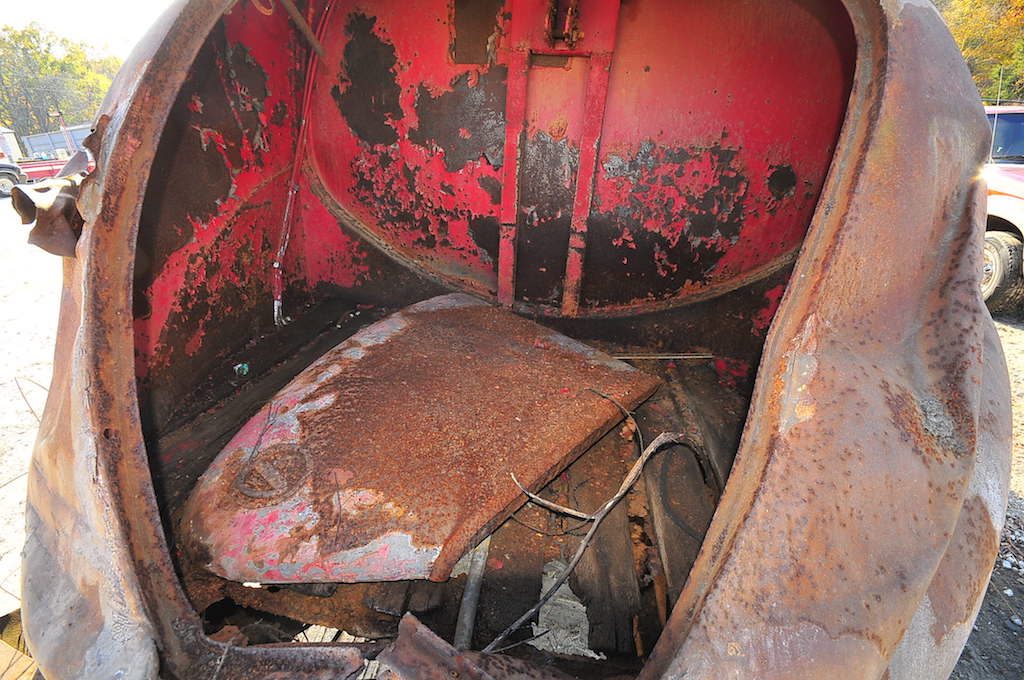 The image details the wooden slats that remained inside the trunk and were still in the tanker when it left the East Coast. Somewhere along the way, the slats have been stripped out.

We are wondering if the use of timber in the trunk and the other lockers was possibly to minimise the risk of sparks from metal containers carried in these compartments.

One of Steve’s hidden talents is that he is a cabinetmaker by trade, so he is well placed to fit the replacement slats. Steve is going to source and use an American timber to keep the restoration as authentic as possible.

A wealth of information about the Texaco tank truck is being put together at the moment. The details, and the source of the image and tanker history, will be published shortly. Watch this space!

When Steve has turned the tank body on his own, he has used a chain and D shackle to steady the body while the pin is out of the right angle gearbox on the rotisserie. He had a small incident the other day when the D shackle came apart while rotating the body with the pin removed.

We have a theme park here in Auckland with a pirate ship ride that basically swings back and forward and gradually gets higher and higher. That was all I could visualise as Steve relayed the story of the swinging tank body. He is a great storyteller so the tale was told with the usual animation and humour.

When the angle drive started freewheeling, all Steve could do is stand back and let the body swing like a giant pendulum. While he, the tank body and the rotisserie came out of the incident unscathed, the angle gearbox had a bit of a rough time during the “ride”.  Steve has had to strip and rebuild the gearbox –  it has since been fitted back on the rotisserie and everything is working perfectly.

After hearing of Steve’s experience, Tom Andrews came up to Auckland and he and Steve cut the tank body from the rotisserie and re-positioned it slightly. The aim of doing this was to improve the ease in which the body can be turned on the rotisserie. Steve and Tom had calculated the centre of gravity when they constructed it but the new adjustment, as small as it was, has made all the difference and the rotation of the tank body is now a lot easier.

Just to note that when the tank body is being worked on, there are three safety measures in play. The first is the angle gearbox itself that locks the rotisserie bar in place (except when Steve is operating it!). Then there are strops attached to each side of the rotisserie frame that provide a safety backup to keep the body in position when it is not upright. And thirdly are supporting beams that lie across the frame underneath the body as an extra protection as well.

Our thanks to Tom for helping with the adjustments to the rotisserie.

At every opportunity, Steve is restoring the small Texaco tank truck parts that adorn our house at the moment. 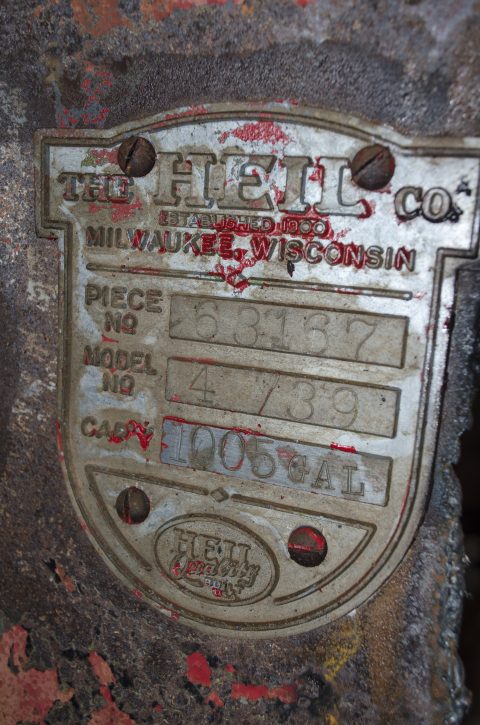 Relevant to the tank body is the Heil ID plate that is mounted in the right rear locker. 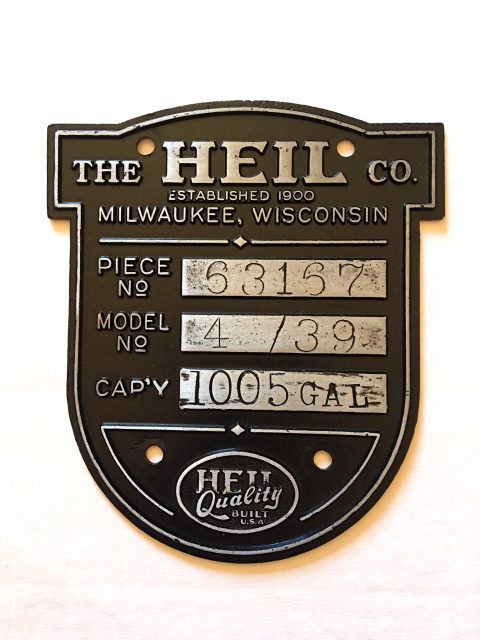 Steve has restored it in black to keep it consistent with the other ID plates on the tank truck.

There are four amber “arrow” turn signal lights on the Texaco tank truck – two on the front fenders and two at the back of the tank body. These were also used on some 1940s trucks and buses.

The intact lens in the image is from the front fender but the opposite lens is broken. Both of the rear lenses are missing. These are proving difficult to find so if anyone can help, please get in touch. 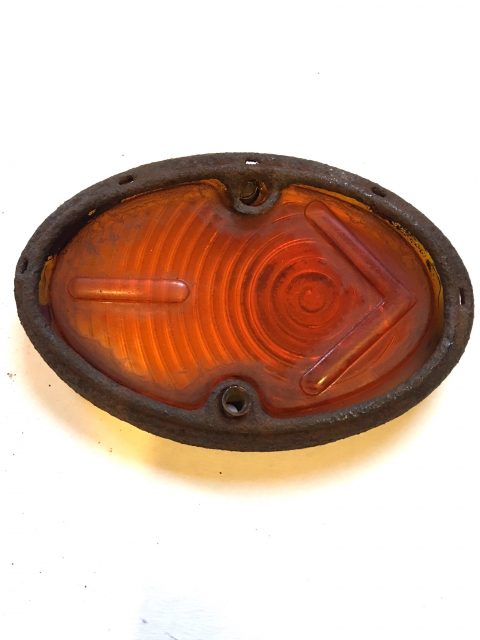 Our son, Mitch, at Electric Creative Ltd is going to draw up the missing letters on the Heil tank body. Mitch has initially used some vinyl to create a template of the existing letters to scale. 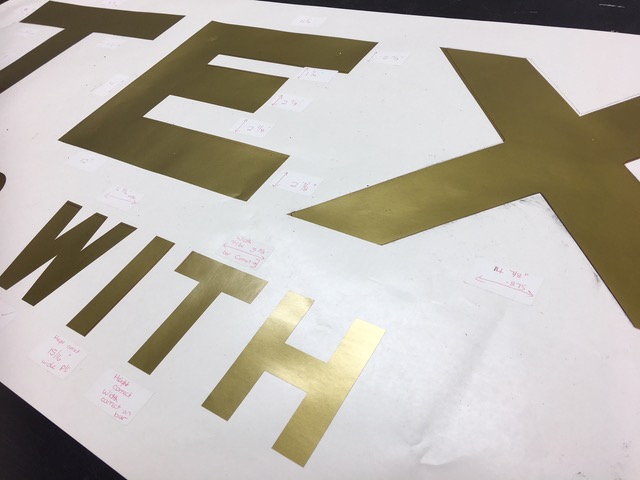 The main update on the tank body is that Steve has delivered it this week to the clever and talented Simon Tippins at Creative Metalworks. I can’t wait to share the amazing work in progress photos that will follow once work begins on repairing the Heil tank body.