Since starting this blog on the Diamond T Texaco tanker restoration, we have been put in touch with some really interesting and helpful people throughout the world. One of these folks is Jerry Turner who lives in Veradale, Washington, USA.

Jerry has an online store with thousands of items, and also sells on Ebay with the user name ‘hiperlightflyguy’. If you are undertaking a project or restoration and would like to contact Jerry about ordering an existing item, or having a custom piece made, you can email him at jerry@nostalgicreflections.com. His website is well worth having a look at. 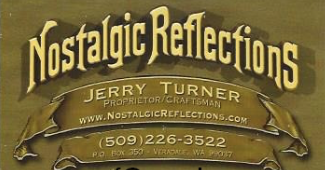 So far, Jerry is the only person we have come across who has actually seen one of these tankers in service. We really appreciate him taking the time to share the following memories from his childhood.

Image of a Texaco tanker taken from a Diamond T advertising brochure c. 1940

“I was just 5 years old when I saw my first and only Diamond T Texaco tanker. We had just moved to Denver, Colorado, from Napa, Idaho. My dad, Paul Turner, was an electrician for Union Pacific Rail Road in Idaho. His brother, Glen Turner, had settled in Denver a few years earlier, and started his own electrical business, Turner Electric. Uncle Glen invited my dad to join him in Denver as the electrical business was growing rapidly and my uncle needed the help.

I was just a little guy but remember my mom, JoEtta Turner, discussing the pre move with my dad. Her argument was that Union Pacific was a good company to work for with lots of benefits, but working for my uncle would be a risk. I remember my dad saying that he was still young enough to get back on with Union Pacific in Denver, if the electrical business didn’t work out.

It was in the spring of 1950, and even I could recognize that Denver had a lot to offer. The hustle and bustle was exciting to me, coming from a small town in Idaho where everyone knew each other, and life seemed slow and uneventful. My dad had to prove to my mom that he had made the right decision, so he worked hard to make ends meet.

My dad worked with my uncle for 2 years but he could see that there was plenty of electrical business to go around. My dad realized he could make more money by having his own business so he started City Electric. He bought a new 1951 Chevrolet All Aluminium Step-In-Van and I was with him when he bought it. To make a long story short, after more than 400,000 miles and 3 engines later, I STILL own the truck.

My brother, Don, and I went to work with our dad every day during the summer, and on weekends during the school years. It was late 1951 or early 1952 when I saw the most unique truck in my life, even up to this day in all of my 73 years so far. It was a TEXACO Diamond T tanker. I remember seeing it at a new Texaco station that was built on the corner of Broadway and Oxford Avenue in Englewood, Colorado. The gas station was at 4100 South Broadway, just 2 blocks from our house that my dad had built for our family at 4200 South Bannock.

I yelled out to my dad, “LOOK at that neat old truck”. I was quite shocked that my dad’s response was, “That is one of the ugliest trucks ever made”. Granted, it had to have been approaching 15 years old at the time, and it was older than I was, but I just couldn’t take my eyes off it. I saw it there several times, and it was still in service. Within a year or two, it was gone. I don’t know what ever happened to it, but I will never forget it!! I would still love to have one today. I am not sure how many were built, but in all my travels throughout my life, I have never seen another one.

That started my love affair with Diamond T trucks. I have always wanted one but never seemed to be in the right place at the right time, or have the money to buy one. They have always been the “Rolls-Royce” of trucks, and are highly sought after.

Well, at 73 years of age, I finally got my very own Diamond T truck. It is a 1948 big truck, and I have a 1948 “Round Nose” Fruehauf Furniture Van to go with it. I am in the process of restoring it for my business.”