The truck wiring is complete, Rowan has painted the Diamond T front guards and Kelly has done a beautiful job with the upholstery. The end is in sight….

The Instrument Panel and Wiring

It goes without saying that the focal point of the 1938 Diamond T cab interior is the deluxe instrument panel and gauges. Steve tackled the restoration of this area in two stages.

The first was to address the appalling state of the gauges.

The second was to reinstate the finish on the dash panel itself. We were very fortunate to get the machine turning done last year by Dylan Orpwood in Christchurch

The very last job to complete the working instrument panel was to repair the speedo cable. Steve engaged the services of Robinson Instruments in Onehunga to get a new inner cable made. 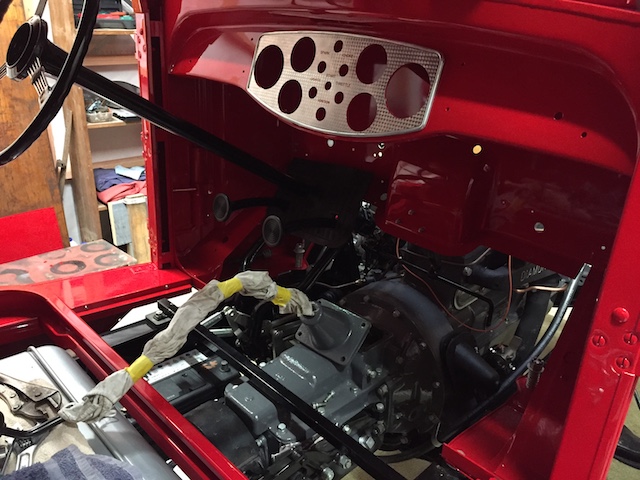 With the cab painted, Steve was finally able to fit the instrument panel. He then began placing all the gauges in position in readiness for wiring. 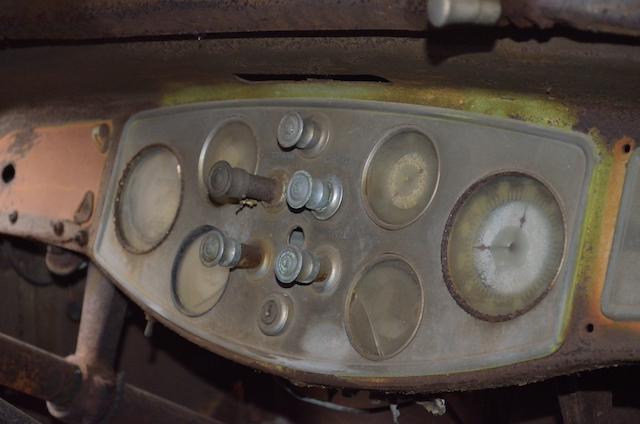 The dash panel at the beginning of the project showed only faint traces of the machine turning. 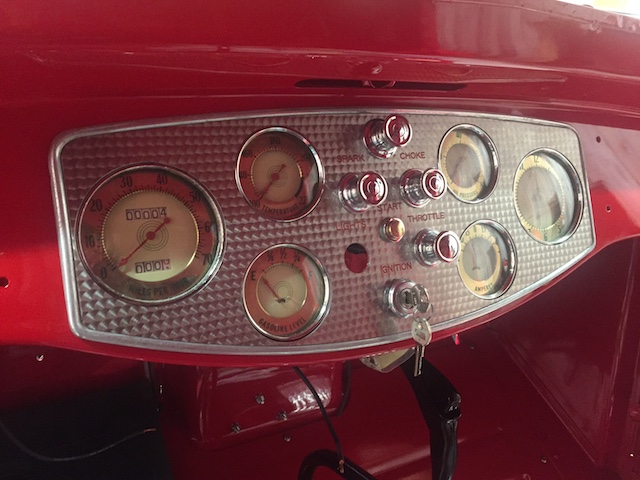 Thanks to a team effort, the instrument panel is fully restored, functional and looking simply stunning.

With the engine, gauges and lights in place, Steve worked through the truck and tank wiring with the help of an auto electrician. Completing the wiring in the truck is another stage of the restoration ticked off.

Steve couldn’t wait to turn the key and start the truck, but he was in for a huge disappointment.

In Update #37, I posted a short video clip of Steve starting the engine up for the first time using a jump-start. It ran like a well oiled sewing machine!

So it was with great excitement and anticipation that he sat in the cab and turned the key. To Steve’s dismay, this time it didn’t start and there was no compression whatsoever.

After checking the obvious areas, Steve removed the side plates and cylinder head and quickly discovered what the problem was…… all six exhaust valves were jammed open. 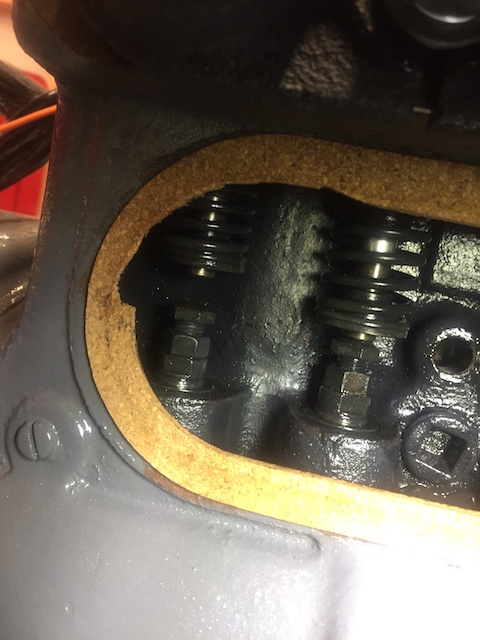 The tappet clearance shown on the left is indicative of the size of the spacing across all the jammed open exhaust valves.

The valves were really seized up so Steve sprayed a penetrating oil around the valve stem area over a number of days in an attempt to loosen them. After a week of patience and persistence, Steve still had difficulty dislodging the valves. Once they were removed, it was apparent that the valves had jammed due to a coating that had formed on them. 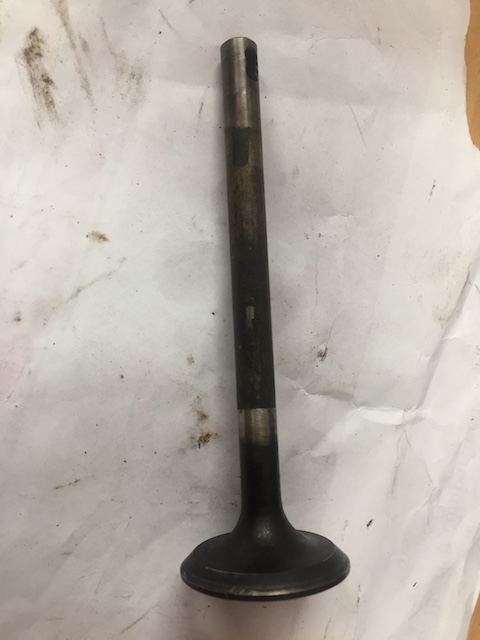 The substance that had formed on the valves occurred from that initial engine start up. Steve reached out to truck owners on several forums and the consensus was that the fuel had been of poor quality, had become stale and had transformed into a varnish-like glue.

To clean up the valves, Steve linished the stems and lightly reamed the guides to remove the build up. He reinserted the valves, checked the tappet clearances again and used a new head gasket to complete what he described as a ‘very frustrating exercise’. Another one of those ‘one step forward, two steps back’ moments!

Steve is now using a mixture of high quality fuel and Marvel Mystery Oil to prevent this happening again, and the truck is once again running like a charm.

In the last update, Kelly O’Donnell had powder coated the steel elements and reattached the springs to the frames. Steve was contemplating whether to replicate the original style of the seat upholstery or to add some reinforced seams.

I’m pleased to say that Kelly made the seats to the original factory design! 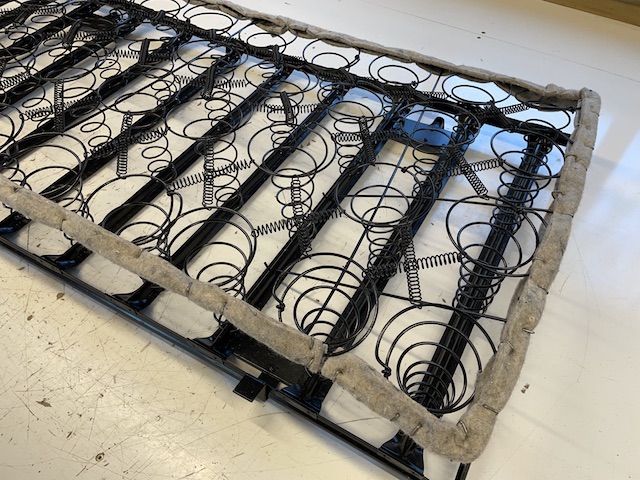 The next step was to place underfelt around the perimeter of the springs as a protective measure and avoid the edge wire protruding through the padding. 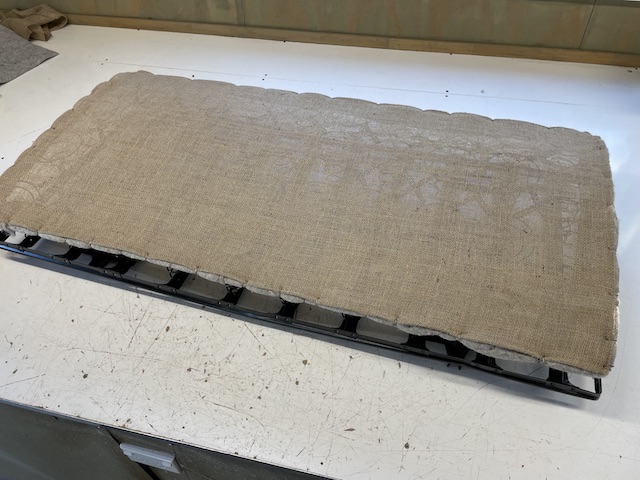 Kelly then placed hessian across the springs to support the loose padding and prevent it from falling through the springs. 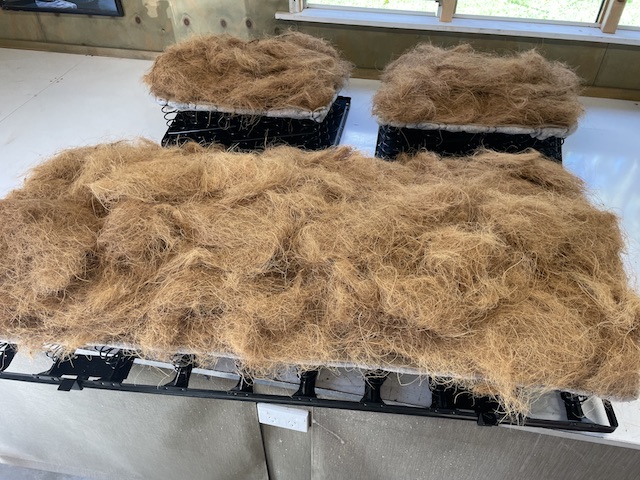 There was not enough of the original horse hair to create the volume needed in the padding so Kelly bulked it up with some coconut fibres. 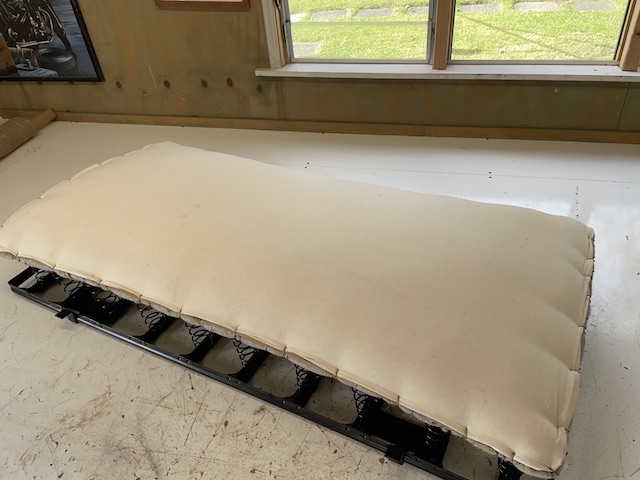 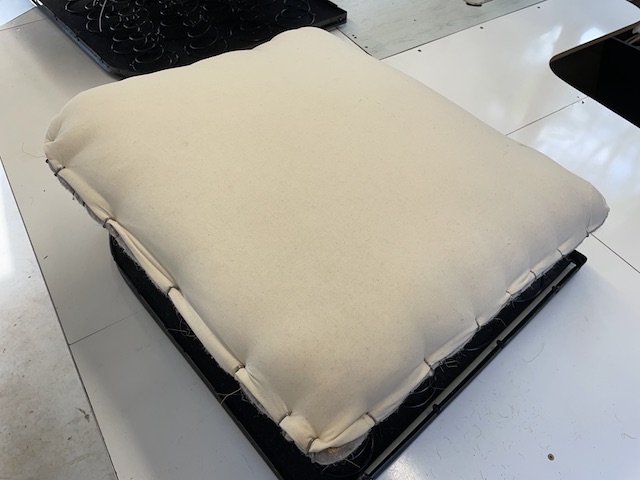 He placed and secured a calico cover across the padded base pieces and backrest to tie everything together and create a good foundation for the upholstery.

Kelly sewed the covers and piping and began test fitting each piece.

In mid-May, it was time to reunite the seat with the truck. Kelly fitted the new roof lining and then positioned the finished seat bases and backrest in the cab. 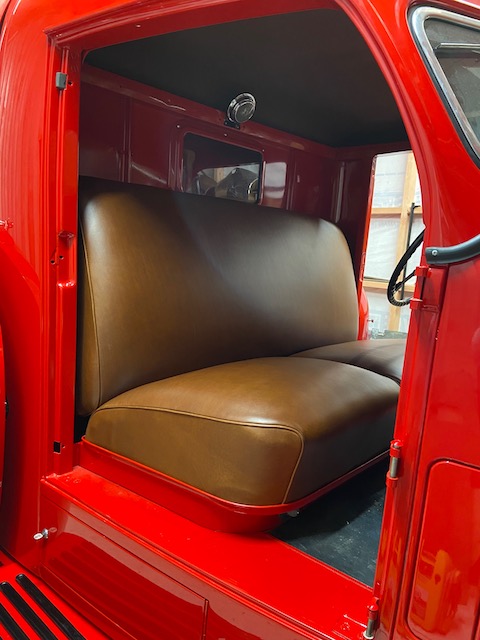 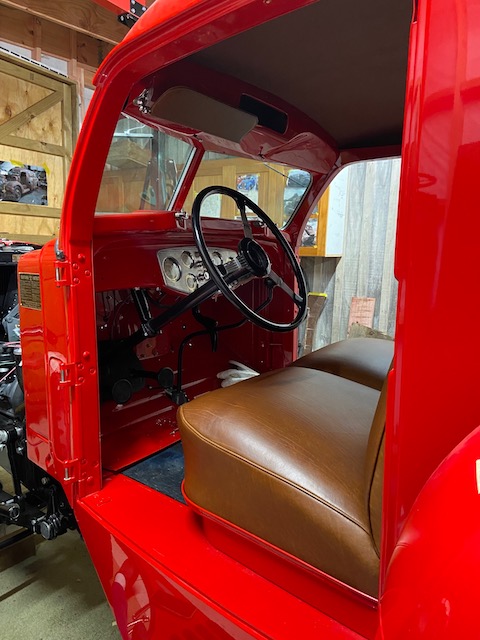 Our sincerest thanks again to Kelly for his beautiful workmanship. He has replicated the original seat and captured the style of that era so perfectly. He has nailed it!

Several weeks ago, Rowan painted the front guards / fenders at Merlin Auto Refinishers Ltd in Takanini. James King at Merlin Auto was very accommodating and worked in with Rowan to find a mutually suitable time to hire the booth.

Rowan didn’t capture any photos of the painting this time, but the finished product was the same top quality, world-class finish that Rowan has achieved throughout the project. I first set eyes on the guards as Steve pulled up with the trailer – the PPG Delfleet paint and Rowan’s application skills have these fenders looking absolutely beautiful! 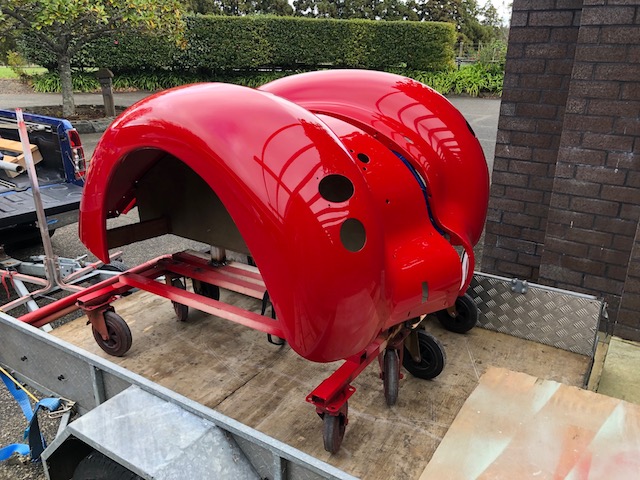 The PPG Delfleet system has once again produced a glass-like finish to the Diamond T front guards.

Our thanks to James at Merlin Auto Refinishers Ltd for the use of his booth, PPG and Car Colors of North Shore for their continued support and assistance and, of course, Rowan for his expertise and talent in creating yet another piece of art.

A Visit From London

Several weeks ago, we were contacted by someone who follows the blog from London. Darryl, originally from New Zealand, is now based in the UK and was heading home for a short trip to catch up with family.

Darryl was hoping to see the truck in person while back in NZ so we arranged a time that suited us all. It was a pleasure to meet Darryl, and we were humbled that he took time out of his itinerary to visit us and look over the Diamond T tanker.

This very special truck continues to bring people together and create new friendships….